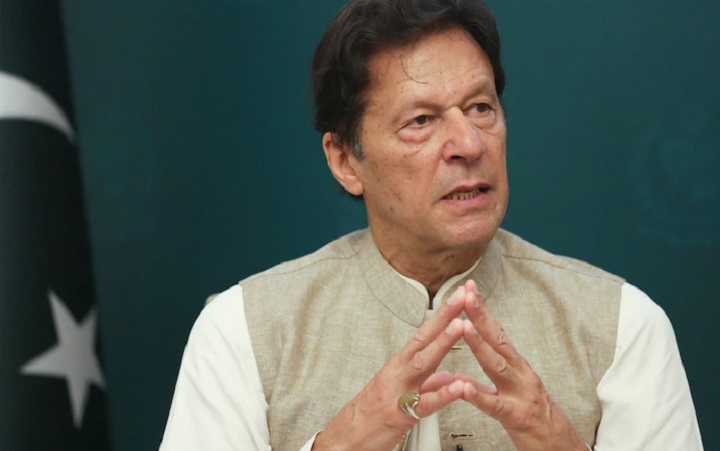 On Thursday 1st July, Pakistan Prime Minister Imran Khan reaffirmed to members of the Chinese media his support for the Chinese regime’s policies in East Turkestan. He stated that because of Pakistan’s “very strong relationship with China”, he believed Beijing’s version of its treatment of the Uyghur Muslims over the overwhelming evidence from human rights organisations, experts of the region, and testimonies from Uyghur Muslims of the brutal atrocities and repression that Muslims have suffered in ‘Xinjiang’ at the hands of the Chinese dictatorship. Khan also praised China’s political system, stating that its Communist Party rule offered an alternative and better model of governance to the democratic system. This June, in an interview with the American news website Axios, Prime Minister Khan refused to condemn or even acknowledge China’s repression of the Uyghur Muslim population in East Turkestan. When asked by the interviewer why he was silent on the issue, he replied that he was focussed on incidents within his nation and on the border. He was promptly reminded by the journalist that the persecution of the Uyghur Muslims was happening on his border.

Imran Khan, as with all the treacherous rulers of the Muslim lands, has sold his soul to the highest bidder. He sees nothing but dollars with regards to his dealings with China, specifically the $60 billion dollars that China has invested in Pakistan in the China-Pakistan Economic Corridor projects of its Belt and Road initiative. For the sake of material gain, Khan chooses to willingly ignore China’s religious genocide against the Uyghur Muslims aimed at erasing their Islamic identity and the presence of Islam in East Turkestan through mass surveillance of the Muslim population, intimidatory tactics, enforced disappearance and mass detention. According to the Human Rights Watch Report, “Break their Lineage, Break their Roots”, since 2017, arrests in East Turkestan accounted for 21% of all arrests in China despite the region accounting for only 1.5% of the population. The report also stated that arrests in the region increased by 306% in the last 5 years. Since 2017, the regime has also damaged or demolished two-thirds of mosques in the region. Furthermore, this May, the Uyghur Human Rights Project released its report, “Islam Dispossessed: China’s Persecution of Uyghur Imams and Religious Figures” which stated that over 1000 Turkic origin imams have been detained in East Turkestan and cited Pakistan as being among the countries that have helped China arrest imams in the region. Many were detained for simply holding prayer gatherings or preaching Islam.

As is well-known now, over 1 million Muslims have been incarcerated in concentration camps in the region in which they have faced forced conversion to atheist communist beliefs, forced to drink alcohol and eat pork, and subjected to forced labour. Many of those detained have also endured severe physical and psychological torture, while Uyghur Muslim women have suffered systematic rape, forced sterilisation and abortion. Meanwhile, the children of those Muslims detained have been separated from their families and placed in state-run orphanages where they are also brainwashed into leaving Islam. Alongside this, the Chinese regime has implemented a crippling birth control policy upon the Uyghur Muslim population and other Muslim minorities in East Turkestan. According to a report published this June by Adrian Zenz, a researcher for the non-profit organisation, “Victims of Communism Memorial Foundation” Beijing’s policies of enforced birth limits, mass transfer of workers to other regions and mass internment of Muslims could cut up to 4.5 million births of Uyghurs and other Muslim minorities in the region within 20 years. The birth rate already dropped by almost 50% between 2017 and 2019 in the region. Unsurprisingly therefore, Chinese authorities have been accused by human rights organisations of committing crimes against humanity and creating “a dystopian hellscape on a staggering scale” against Muslims in East Turkestan.

Imran Khan has consistently packaged himself as a champion for Islam and crusader against Islamophobia. Last year, he delivered a fiery speech to the United Nations warning of rising Islamophobia globally. However, his denial of the severe persecution of the Uyghur Muslims in order to curry favour with his Chinese communist chums demonstrates yet again how he has only ever exploited the “Islam” card to try and win popular support and elections. He states that he is focussed on incidents inside his own nation. We ask: is his nation not the Ummah of Rasulillah (saw)? Are the Uyghur Muslims not part of this Ummah of Islam? Does Allah (swt) not say:

Furthermore, Khan claims that he supports the Madinah model of governance, while simultaneously praising a dictatorial communist political system which rejects Allah (swt) and fights Islam! All this shows that Prime Minister Imran Khan is cut from the same rotten cloth as previous secular ‘Ruwaibidah’ rulers who demonstrated utter disregard for Islam and its laws.

So enough of these Ruwaibidah rulers! Enough of their lies and collusion with the enemies of Islam! Enough of their playing with the Islamic sentiments and hopes of this Ummah! This Ummah deserves and desires a leadership which will reflect their deeply held Islamic beliefs, and will protect their Deen and their brother and sisters across the world. Nothing but the Khilafah (Caliphate) based upon the method of the Prophethood will deliver such a leadership. So enough of recycling Ruwaibidah rulers! Let us place our full focus and efforts on establishing the System of Allah (swt), the Khilafah that alone deserves the allegiance and support of the Muslims.