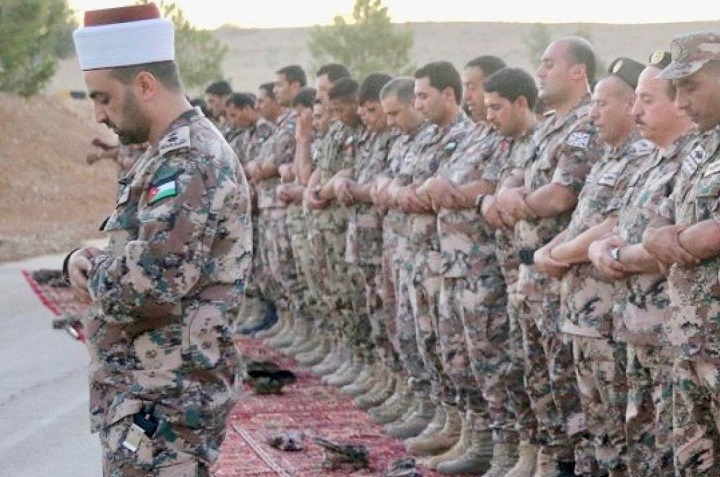 On Monday morning, 10/5/2021, the Jewish entity forces stormed the Al-Aqsa Mosque courtyards and attacked the Murabiteen (those stationed there guarding it), hours before the provocative march of the settlers, the usurpers, in what they called “the Day of the Reunification of Jerusalem.” The occupation forces fired a barrage of tear gas, stun grenades and rubber bullets at Al-Qibli Mosque, the Dome of the Rock, the Marwani Mosque and Bab Al-Rahma prayer hall, and besieged worshipers in I’tikaaf in them, including women, children and the elderly, which resulted in hundreds of them being shot or suffocated from tear gas canisters. The media and activists on social media circulated video clips documenting the moment of the occupation forces’ assault on women in Bab al-Rahma prayer hall by firing tear gas and stun grenades at them directly. These atrocities against the people of the Blessed Land – Palestine continued until the issuance of this press release.

The Jewish entity would not have dared to perpetrate these crimes against the people of Al-Quds in general, and Al-Aqsa Mosque and Al-Murabiteen, men and women stationed in it, if the Muslims had an imam who is a shield that they would fight behind and are protected by him, thus he would mobilize his army to respond to the aggression and fight the aggressor, and heed the cries and respond to the cries of the women from the squares of Al-Aqsa Mosque, Wa Islama, Wa Khalifata. It impacts his hearing and his courage as it impacted Al-Mu’tasim’s hearing and courage before.

If the Muslims had a state and an imam to fight behind and are protected by, then the defense of the Masra (site of Al-Isra’) of our Messenger (saw) would not have been left to defenseless men, women and children confronting with their bare chests and screams of Takbeer, the criminality and arrogance of the Jewish entity; which while targeting Al-Murabiteen in Al-Aqsa with bullets and bombs, bombed the Gaza Strip with its planes, raising 20 martyrs among them 9 children, up until the time of preparing this statement. This usurper entity does not differentiate between young and old, nor between man and woman, nor does it differentiate between the blood of the people of Al-Quds, West Bank or Gaza Strip.

The Jewish entity would not have dared to commit these massacres and crimes had it not been for the betrayal and negligence of Muslim rulers, Arab and non-Arab, on top of them the King of Jordan who holds the guardianship of Al-Aqsa Mosque, and Erdogan of the red lines who persists in his rants and yet we do not see any action, and Sisi who closes in on the people of the Gaza Strip and only interferes to conclude truces and agreements that serve the Jewish entity, as is the case for the rest of the conspirators, the negligent, and the oppressors! May Allah destroy them, how they are deluded.

O Sincere Ones in the Muslim Armies:

The Jewish entity has spread corruption and desecrated the Masra (site of Isra’) of your Prophet, and it has made its people taste all kinds of harm and torture. The blood of the innocent was shed in the sacred month, so what are you waiting for to move to support and liberate it from the abomination of the usurper Jews? Did you leave the task of defending the first of the two Qibla and the third of the Two Sacred Mosques to the defenseless people, while you possess tanks and planes?!

Isn’t the blood boiling in your veins when you watch these scenes?! Do you obey the creation and disobey the Creator?! Are we not brothers in the Deen? Do you not have a duty to support us?

O Allah make this call reach the Muslim Armies, O Allah relieve us from hardships and support us with Your victory that You have promised.