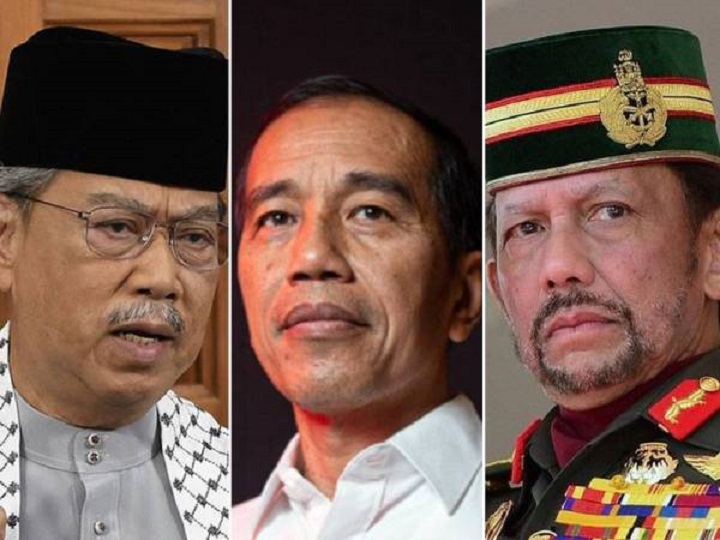 As the situation in Palestine worsens following aggressions by ‘Israel’, the Muslim leaders in Southeast Asia i.e. Indonesia, Malaysia and Brunei have issued a joint statement to condemn the violence. The statement reads: “We condemn in the strongest term the repeated blatant violations and aggressions, carried out by the Israelis, targeting civilians throughout the Occupied Palestinian Territory, particularly in East Jerusalem and the Gaza Strip, which has killed, injured and caused suffering to many, including women and children. We are also gravely concerned with the illegal expansion of settlements; and the demolitions and seizures of Palestinian‑owned structures across the occupied West Bank, including East Jerusalem…”

The three Southeast Asian Muslim-majority nations on Sunday issued a rare joint statement lambasting Israel’s air strikes on Gaza and what they described as Israel’s “inhumane, colonial and apartheid” policy towards Palestinians in occupied Palestinian land. One of the most prominent points in this joint statement is related to the two-state solution; “…We call upon the international community to remain resolute in their commitment to safeguarding the “two-state solution” towards achieving an independent State of Palestine, based on the pre-1967 borders, with East Jerusalem as its capital.”

The Palestine issue always become one of most sensitive issues amongst Muslims, the Muslim countries of Southeast Asia are no exception. Anis Huszainey, a Middle East researcher with Malaysia’s Institute of Strategic and International Studies, said the statement was the first coordinated response on the Palestinian cause among the three countries. Especially, when United Arab Emirates and Saudi Arabia seemingly have softened their stance following an entente with Israel, the hardline stance by Malaysia, Indonesia and Brunei may keep the matter on top of the global agenda.

In the midst of betrayal of Arab countries on the Palestinians through the normalization of relations with ‘Israel’ since mid-2020 and then, this stance of Muslim countries in Southeast Asia, the most remote regions in the East of Muslim world, seen such as a fresh breeze. This is because the betrayal of Arab rulers through the Abraham Accord last year was predicted to have a significant impact on the sensitive status of the Al-Aqsa Mosque, even this was revealed by a report by an ‘Israeli’ NGO called Terrestrial Jerusalem.

The emotional bond of Muslims in Southeast Asia to Palestine is unquestionable, they offer immense prayers and humanitarian assistance for the Palestinian people. This is one reason why the Indonesian government was quick to deny a rumor that Indonesia was interested in normalizing with ‘Israel’ last year, as experts think this will put a huge risk to domestic politics in Indonesia, which is currently struggling to dampen the revival of Islam. Bond of Islamic brotherhood among the Ummah is the strongest factor in Southeast Asian Muslim leaders take the “safe attitude” in order to remain receive the legitimacy from the Ummah, even though they themselves almost have no solution for Palestine.

The contents of the joint statement of the three Southeast Asian countries also contain substances that need to be deeply criticized. Huszainey for example, criticized the countries for continuing to seek recourse through the Organization of Islamic Countries (OIC) and the UN Security Council – both which had failed in the past to produce tangible results in advancing Palestinian statehood. And with regards to “two-state solution”, these three Muslim countries must also not forget two points, first that ‘Israel’ has bad habit to always betray every international treaty, second the Jewish entity’s existence persists because of the support of Western countries. So, the “two-state solution” is clearly not the correct solution, because it is still tarnished by a secular way of thinking which actually recognizes the existence of the usurper state of ‘Israel’ and maintains a secular nation state system.

The correct Islamic solution in the view of Islam is to mobilize Muslim armies to be applied full liberation of Palestine which would put an end to the Western project to build and support the Zionist state. This requires the re-establishment of the Khilafah Rashidah (a properly guided Caliphate) based on the method of the Prophethood to uproot and cut off Western power support for the Jewish entity.