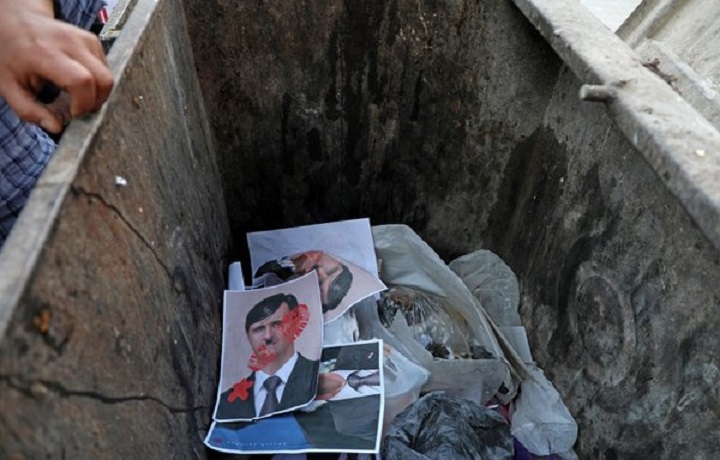 After US President Joe Biden instructed the foolishly arrogant Prime Minister of the illegal Jewish entity to close his current brutal attack on the people of Palestine for fear of the anger of the Muslim Ummah, he has sent his Secretary of State Anthony Blinken this week to visit the region to ensure the security of the illegal entity and calm the anger of Muslims. The illegal Jewish entity is a continuation of the crusader entity of a thousand years ago, planted by the West in the heart of the Muslim Ummah in order to be a point of control for them in their exploitation of the Muslim Ummah and the entire world. It is a ‘Western’ state deep within the non-Western world.

Anthony Blinken, following the style of the US Democratic Party, has tried to show himself more sympathetic to the ‘Palestinian’ side, reopening a diplomatic office and pledging $40 million of new aid for the people of Palestine. After meeting with President Mahmood Abbas in the West Bank, Blinken said, “As I told the president, I’m here to underscore the commitment of the United States to rebuilding the relationship with the Palestinian Authority and the Palestinian people, a relationship built on mutual respect and also a shared conviction that Palestinians and Israelis alike deserve equal measures of security, freedom opportunity and dignity.” But the reason for this apparent sympathy for the people of Palestine is only to calm their anger to secure the illegal entity, just as the two-nation solution is also designed not to secure the rights of the people of Palestine but to secure the Jews in the illegal entity. Blinken made this clear in an interview on Sunday, before leaving for his trip, saying that Biden “has been very clear that he remains committed to a two-state solution.” Explaining this, he said, “Look, ultimately, it is the only way to ensure Israel’s future as a Jewish and democratic state and, of course, the only way to give the Palestinians the state to which they’re entitled.” The proof that the two-nation solution is not for the people of Palestine is that the Palestine part of the solution has never been implemented, while the Jewish part of the solution was implemented immediately. America will keep affirming the two-state solution as a legal and political defence for the continued existence of the illegal Jewish entity because the reality is that the Jewish entity is illegitimate even according to the so-called ‘international law’ that has actually been imposed upon the world by the West in order to support ongoing Western imperialist exploitation of the entire planet.

Muslims must not be drawn into biased Western thinking and justifications. Palestine is historically and legally fully Muslim land that deserves to be again ruled over by Islam. This is an obligation not on the Muslims living in Palestine alone but upon the entire Muslim Ummah. It is the rulers of Muslim countries that provide the practical security for the illegal entity, which is why Blinken visited Jordan and Egypt also. And it is only when these agents to the West are removed that it will be possible to liberate Palestine also. With Allah’s permission, the Muslim Ummah shall soon re-establish the righteous Islamic Khilafah (Caliphate) on the method of the Prophet (saw), that shall unify all Muslim lands, liberate all occupied territories, restore the Islamic Shari’a and way of life, and carry the light of Islam to the entire world.

Syrian Election, US Withdrawal from Afghanistan

The head of the Syrian parliament announced on Thursday that Bashar al-Assad, the butcher of Syria, has been re-elected for a fourth term with 95.1% of the vote, giving him seven more years as president. Only government-controlled areas were included in the vote count. Western countries have criticised the vote, with Anthony Blinken tweeting, “The Assad regime’s so-called presidential election is neither free nor fair. The U.S. joins France, Germany, Italy, and the UK in calling for the rejection of the regime’s attempts to regain legitimacy without respecting the Syrian people’s human rights and freedoms.” However, the reality is that it was America that conducted an elaborate set of operations over a decade to secure the Syrian regime and crush the revolutionary uprising against it. America made Syria its top foreign policy priority and mobilised not only its own forces but those of multiple other countries to engage on different sides in the Syrian revolution in order to control and extinguish it. America is deeply fearful of the return of Islam but nothing can stop the Muslim Ummah if they are determined to revive their Khilafah State, which will, almost from its inception, join the ranks of the great powers due to its vast size, resources, population, military power, and Islamic ideology.

According to an article this week in the New York Times, headlined “Pentagon Accelerates Withdrawal From Afghanistan”, American troops are expected to be out of the country by early to mid-July, well ahead of Biden’s 11 September withdrawal deadline, with NATO and allied forces also intending to follow the same schedule. The US military fears intensified attacks from the mujahideen during their exit. America’s purpose, however, is not to abandon Afghanistan but to update its plan for Afghanistan, in order to continue to control it without physical presence, as it controls numerous other Muslims countries. The Times article quotes the US Central Command chief responding to concerns raised by US lawmakers last month regarding how the US will continue ‘countering terrorist threats’, as their objectives in Afghanistan are usually presented; the General’s answer, “It’s going to be extremely difficult to do, but it is not impossible.” The key to continued US control is of course through Pakistan, whose military and political leadership are firmly loyal to America. It was Pakistan that enabled America to enter land-locked Afghanistan in the first place. This week, Pakistan’s National Security Advisor met in Geneva with his US counterpart, tweeting, “Pleased to meet US NSA … yesterday”. The failed Pakistani leadership thinks that its salvation is in US support, and is eager to do whatever it can to help American objectives in Afghanistan, so that America will be pleased with it. Allah (swt) says in the Noble Qur’an:

“Let not believers take disbelievers as allies [i.e., supporters or protectors] rather than believers. And whoever [of you] does that has nothing [i.e., no association] with Allah, except when taking precaution against them in prudence. And Allah warns you of Himself, and to Allah is the [final] destination.” [Surah Aali-Imran 3:28].