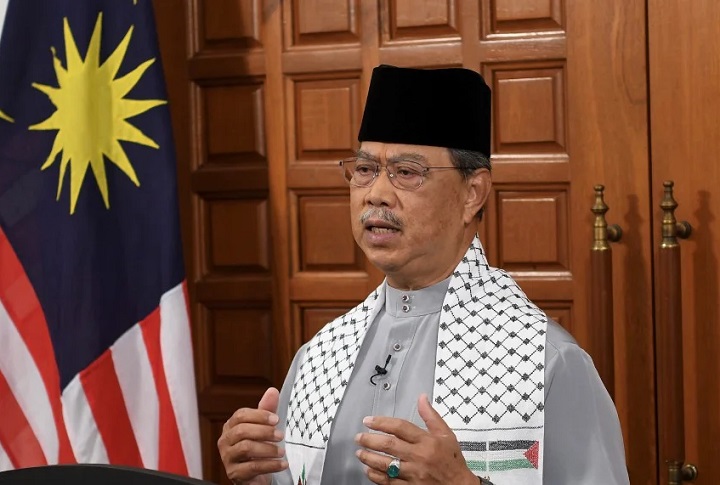 On May 10th, clashes broke out at the Al-Aqsa after the police force of the occupying Zionists attempted to evacuate the compound in order to allow access to the Jews to celebrate the Jerusalem Day flag march through the Old City. The Zionists, without shame, stormed and desecrated the holy site causing injury to more than 200 Palestinians. This event culminated in widespread protests and violence intensified across the occupying, illegal state of Israel. The illegal Zionist Israeli Defense Force (IDF) then mounted attacks upon Gaza as a ’retaliation’ of the barrage of rockets fired by Hamas and other Jihadi groups in Gaza. It was clearly an unequal and indiscriminate ‘retaliation’. More than 200 Palestinians were martyred, including many children and women. The attack on Muslims in Gaza ‘shocked’ the world, especially the Muslim nations, and these Muslim leaders never fail, as always, to offer their lip service against the illegal Zionist state, expectedly without any solid solution.

Comment:
The Prime Minister (PM) of Malaysia also joined the ‘club’ of condemning the Zionist Jewish regime’s ‘disproportionate and atrocious aggression on May 8, 2021’. The PM, Tan Sri Dato’ Muhyiddin Yassin addressed the nation on the 15th of May 2021 on the situation in Palestine. As expected, the same words, over the years, are reiterated over and over again – ‘Israel’s escalation of violence and widespread bombardment on Palestine is an act that violates international law, human rights law, international humanitarian law, the Charter of the United Nations (UN) and is a war crime under the 1949 Fourth Geneva Convention’. And yet again, year after year, statements after statements are issued – ‘In this regard, Malaysia will take the lead, together with Indonesia and Brunei, in issuing a joint statement to strongly condemn Israel’s oppressive attacks on the Palestinians’. And of course, OIC must also be included to show Muslim ‘solidarity’ in facing this adversity – ‘The Organization of Islamic Cooperation (OIC) will hold a virtual Emergency Meeting of the OIC Executive Committee at the foreign ministers’ level to discuss the latest developments in Palestine that is expected to take place on May 16, 2021. The Malaysian Government will be represented by the Minister of Foreign Affairs who will reiterate Malaysia’s firm stance on the situation in Palestine’. And not forgetting, the blame that must be placed upon the ‘international community’ for not initiating any action – ‘Like the rest of Malaysians, I am saddened and disappointed by the inability of the international community, especially, the UN Security Council, to immediately halt Israel’s escalation of violence against the Palestinians. To date, the UN Security Council has not issued any statement on the current situation in Palestine due to opposition from the United States of America. Nevertheless, Malaysia will continue with our efforts in urging the international community, especially the UN Security Council, to act swiftly in compelling Israel to stop its attacks on the Palestinians’. And finally, the American solution to the problem must be iterated again, so as to please ‘our good friend, the USA’ – ‘Malaysia is all for a fair and equitable settlement through the Two-State Solution based on the pre-1967 borders, with Jerusalem as the capital of Palestine as the only viable solution to the Palestinian-Israeli conflict’.

The whole address is almost completely a ‘copy and paste’ of addresses by previous leaders of Malaysia. This is the kind of puppets that the Muslims have to deal with. When these ‘leaders’ are in power, they disregarded the most rational solution to the problem in the name of ‘diplomatic and political expediency’. Every reasonable, do-able solutions such as strongly calling Muslim nations to unite in using whatever advantages that are accessible to them, such as oil, to effectively pressure the Zionist state, is not mentioned at all! And Mahathir, the ex-PM of Malaysia, had to wait until he is 95 years old to suggest this, now. The illegal Zionist state was established by shedding the blood of Muslims. It is an illegal state installed by war. The only way to solve this is by war. Jihad must be declared. Muslim armies from all the Muslim lands must unite under the shield of the Khilafah (Caliphate) to undo the occupation. We cannot expect the puppets to do this. The responsibility falls in our hands to establish the Khilafah and rid ourselves of the Zionists once and for all.