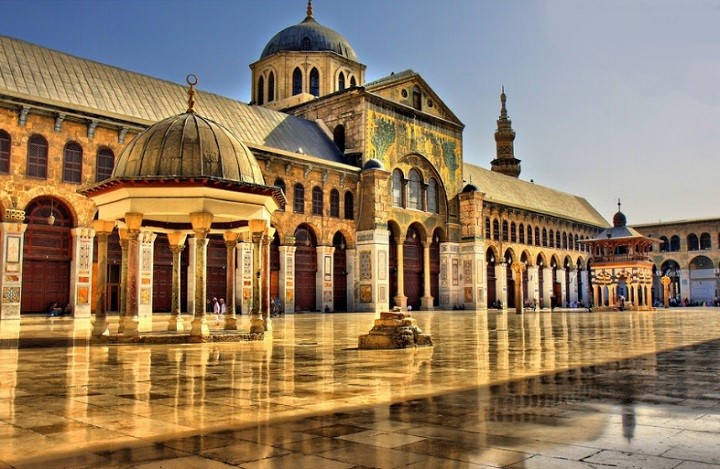 “Then is it the judgement of [the time of] ignorance they desire? But who is better than Allah in judgement for a people who are certain [in faith]” [Al-Ma’ida: 50]

Since the start of the blessed revolution of Ash-Sham against the regime of subordination and criminality, the plots of the conspiring countries and their attempts to eliminate the revolution and the honest ones among its sons have not stopped, only because they realized that it threatens the largest criminal agent regime that serves their interests and implements their plans.

Steps were advanced over other Arab revolutions when they raised the slogan: “Our leader forever, is our master Muhammad”, and the sons of the revolution began to aspire to live in the shade of Islam’s justice, offering the greatest sacrifices for its sake, their most important constants were: to topple the criminal regime, and establish the Islamic rule.

It was of the most important plots by the Kuffar of the West and their tools that shared among themselves the roles; throwing the revolution into the trap of dirty political money, then robbing its decision, fabricating political and military leaders for it, dominating its followers, who carried out everything asked of them, so it was lost and made people lost, and was the internal tool for implementing the external plans… So, the compass deviated, the constants disappeared, and the goals vanished. We no longer hear those who talk about the overthrow of the regime, nor about the necessity of ruling by Islam, and the discussion about a transitional phase and a constitutional committee started, in implementation of the steps of the American political solution, which aims to extinguish the flame of the revolution that is still burning in the hearts of the sincere among its sons despite the severity of the plot, and despite their great suffering.

The conspiring states, led by America, consider that the conflict between them and the sincere sons of the revolution of Ash-Sham is an existential struggle, aimed at keeping Islam away from rule, and eliminating even the thought of returning to it, because its creed is secularism, that is, “the separation of religion from the state, and separation of religion from life”.

Hence the strong insistence on the secularism of the state, and that the constitution should be man-made… For this reason, America chose the members of the Constitutional Committee, who constituted a homogeneous mixture of representatives of the criminal regime and representatives of the secular opposition with its various shades… and produced a constitutional committee only to amend the man-made constitution by which we were governed by the butcher of Damascus… It is as if we have made all these sacrifices, and tasted all these bitterness, only for the sake of constitutional amendments by which we will be governed by a new butcher, if America is kind to us and changes the old butcher!!

O true believers in the revolution of Ash-Sham:

We did not go out in our revolution for constitutional amendments to move from a ruling by other than what Allah has revealed, to a new ruling by other than what Allah has revealed, and from the domination of a tyrant to the new domination of a tyrant. Rather we went out in our revolution against the system of Kuffr and tyranny, to escape from the difficulty of oppression to the ease of justice. And let us rule by the law of our Lord, the Wise, the All-Knowing, in it alone is the victory and salvation in this world and the Hereafter.

And we – your brothers in Hizb ut Tahrir / Wilayah of Syria – place before you a draft Islamic constitution that emanates from our Islamic creed, and all of its articles are derived from the Shariah evidences based on a correct Shariah ijtihad, so that it will be a covenant for all of us, between us and our Lord, and between us and our Ummah and our people, in which we pledge to work to implement it. We call upon everyone from their positions, and each according to his capabilities, we call the honest among our sons and brothers to assume their responsibilities before their Lord, and before their Ummah, so they work with us to restore the ruling by the law of our Lord, and to reject all the man-made constitutions that perpetuate the slavery of people to people, dismissing the legislation of the Lord of the people.

The difference between those who raise Islam as slogans and general ideas, and those who carry it as a constitution and a way of life, is that the latter have a clear and detailed project, and a correct Shariah method that must be followed in order to establish this clear and detailed project. With this project alone, we can distinguish between those with general propositions and sparkly slogans, who soon turn against them and work in contradiction to them, and between the those who hold the correct ideology and hold on to it firmly; those who do not abandon it despite how hard the circumstances are or how great are the temptations.

On the basis of the Shariah constants and the clear and detailed project, we can then hold to account with insight all those who strayed from the path, and bring them back to the right path. But in the event of losing them, the connection will only be personal, and obedience will only be blind, and the way will be haphazard, as we were with the leaders of our revolution in the past ten years.

Today, we present you the draft constitution for the Khilafah (Caliphate) State, so that this state would be conceivable in the minds, with its organs, systems, and rules of governance, where sovereignty is for the Shariah and the authority is for the Ummah.

It is the state of justice and care by the rules of Islam, not a state of oppression, injustice and tyranny, under man-made laws or tyrannical authoritarian whims.

The responsibility of working to restore the ruling by the Shariah of Allah Azza wa Jal is upon us all. This will only materialize if we reject what our enemies plot for us, on top of which is the man-made constitution that they want to impose on us. We must remember that our liberation and glory come only by implementing the law of our Lord and the establishment of the ruling by our Deen under the shade of a rightly-guided Khilafah (Caliphate) on the method of Prophethood. Indeed, it will be established, for it is the promise of our Lord (swt), and the glad tidings of our Prophet (saw). So, respond to your Lord and join us and become from those who work for it.

“O you who believed, respond to Allah and to the Messenger when he calls you to that which gives you life. And know that Allah intervenes between a man and his heart and that to Him you will be gathered” [Al-Anfal: 24].