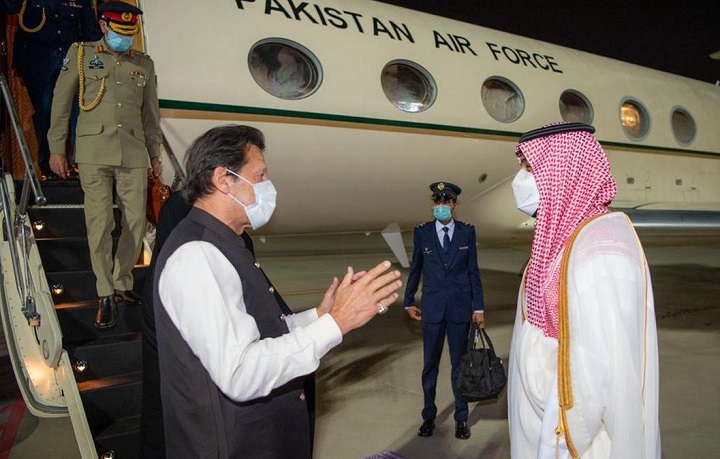 On 10 May 2021, three days after the attack of the Jewish entity on the first Qibla of the Muslims, al-Masjid al-Aqsa began, Imran Khan performed Umrah and prayed in front of the second and final Qibla, al-Masjid al-Haram.  He was even allowed to enter the Holy Kaa’ba, as Jewish forces violated the sanctity of Al-Aqsa and then proceeded to rain bombs on the heads of the Muslims of the Blessed Land of Palestine. A question arises: If, may Allah (swt) forbid, the kuffar stormed the Ka’aba with their dirty boots and their guns and killed worshippers, occupying our Qibla, would Imran Khan, Erdogan and others simply espouse weak words of so-called condemnation?  Would they ask the UN to solve the matter?  Would they call on human rights organizations to do something about it?

The answer is yes. They would do nothing to protect the final Qibla, because they neglected the first Qibla, destination of the Isra’a of the Messenger (saw). They do not because they prostrate to the idol of colonialist-made international law.  International law and its guard, the UN, will never allow any Muslim state to use its military to protect the interests of Islam. It is time for our armies to trample over the international law as they march for the liberation of Al-Aqsa and all of Palestine, pre-1948.

Our Lord (swt) demands that the oppressed by protected through military might. Allah (swt) said,

“Why should you not fight in God’s cause and for those oppressed men, women, and children who cry out, ‘Lord, rescue us from this town whose people are oppressors! By Your grace, give us a protector and give us a helper!’?”  [An-Nisa: 75]. Our Lord (swt) demands the fighting to drive them out of where the drove us out from.  Allah (swt) said,

“Fight them wherever you encounter them and drive them out from where they drove you out, for persecution is more serious than killing.” [Al Baqarah: 192].

Did the Jewish entity not drive out Muslims in legions from their homes since the 1940’s? Do they not continue to expand their settlements on the lands of the Muslims?  So why does Imran Khan not take action when he lays claims to the Madinah state and the Khilafah Rashida?  It is because he is deeply in awe of Western values and customs, steeped in admiration for the the UN and International law. This corrupt colonialist law is more important for these treacherous rulers than the Hukm of Allah (swt). So, the matter is clear. These traitors have chosen the law of man over the Law of Allah (swt) the Creator of the entire universe. There is not hope in them and it is time that the Muslims turned directly to their lions in their armed forces.

O Muslims! The only way to protect the first Qibla, the land of Palestine and Ummah is to listen to the call of Allah and send the Muslim armies to liberate every inch of Palestine, pre-1967 and pre-1948.  The kuffar will break their own international laws and human rights conventions to pursue their interests, just as the Hindu State has done in Kashmir, as the US did in Iraq and as the Jewish state has done by storming Al-Aqsa. If Pakistan Army can be mobilized to Sierra Leone and Somalia, then why can they not be mobilized to liberate Al-Aqsa?

O Muslims! Do not be silenced by the oppression of the criminal rulers. Take heart from those of the ‘Ulema and Islamic politicians who are raising their voices loudly and clearly for the mobilization of our armies, the unity of the Ummah, the Khilafah (Caliphate) and Jihad. Take them as your leadership and support them by all means. Do not neglect your duty in this matter for it is a red line and a matter of life and death. Indeed, Al-Aqsa as the destination of the Isra’a is part of our Aqeedah. Our responsibility is to stand by the Haq, to command to the ma’roof and demand from our brave sons in the Muslim armed forces directly to answer the call of the Ummah.  It is indeed clear that the rulers of Muslims will not respond and so it is a duty for the Muslim army officers to uproot them and mobilize in our hour of need. Allah (swt) said,

“You who believe! If you help God, He will help you and make you stand firm” [Surah Muhammad 47: 7]