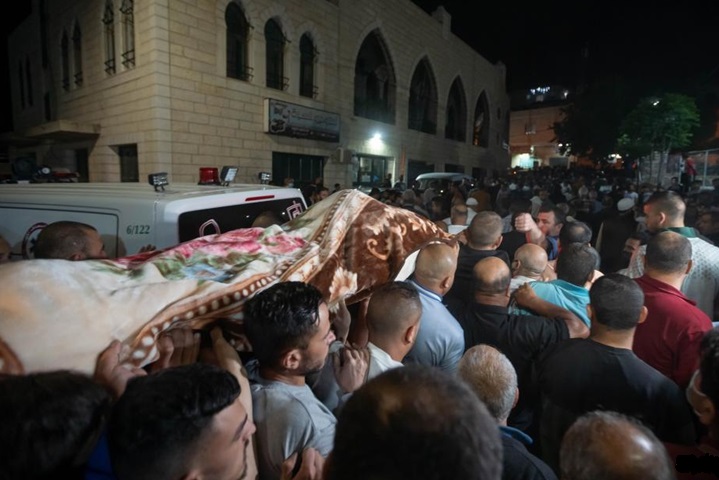 The Jewish entity continues to oppress and kill the people of the Blessed Land – Palestine with false allegations. This woman did not pose a threat to the heavily armed soldiers, even if she was – according to their claims –carrying a knife!! They could at least have restrained her and arrested her, but the mentality of oppression and criminality accompanying fear made them kill her in cold blood and from zero distance.

This is not the first time nor will it be the last. Days before that, they also shot a young man in the same area under the same pretext. It is a systematic and unceasing policy of killing, destroying and displacing of the people of the Blessed Land, the evidences are many and explicit.

This coincided with the events of the Sheikh Jarrah neighborhood in occupied Al-Quds, whose residents are threatened with eviction within less than two months in favor of the fierce settlement attack against them. This is alongside the occupation’s continuous attempts to prevent people, even the people of Al-Quds, from reaching the blessed Al-Aqsa Mosque, especially during the blessed month of Ramadan, by placing barriers at the gate of Bab Al-Amoud, which, with their movement, the youth of Al-Quds managed to remove, as happened previously in the Battle of the Bawabat and Bab Al-Rahma, confirming their steadfastness despite the disappointment of the rulers of Muslim countries, especially Jordan (the custodian of the blessed Al-Aqsa Mosque!). This is in addition to the humiliation and subservience of the Palestinian Authority, which boasts of canceling or postponing the elections because the Jews prevented them from holding them in Al-Quds.

The Jewish policy of hatred is rooted in all these events, as a Hebrew website for settlers bearing the name 0404 published racist titles after the martyrdom of that woman in Bethlehem, in which it states: (Good news … the death of a Palestinian woman). Those spiteful stalker settlers in the blessed land, Al-Quds and Al-Aqsa, who danced in front of the homes of Palestinians threatened with displacement in their favour in the Sheikh Jarrah neighborhood, are the same ones who Abbas sent condolences for their dead in the Jabal al-Jurmuk (Mount Meron) incident! He did not even denounce, or even claim to denounce, the killing of that woman and the attempts to displace the Sheikh Jarrah neighborhood!

These are the sell-out Arab governments that feign and claim guardianship over Al-Quds, its sanctities and its people, and this is the traitorous Dayton Authority that is crying over the elections in Al-Quds. All this asserts time and time again that getting rid of them and establishing the Khilafah Rashida (rightly guided Caliphate) on the method of the Prophethood is the only way to liberate the land and its people.