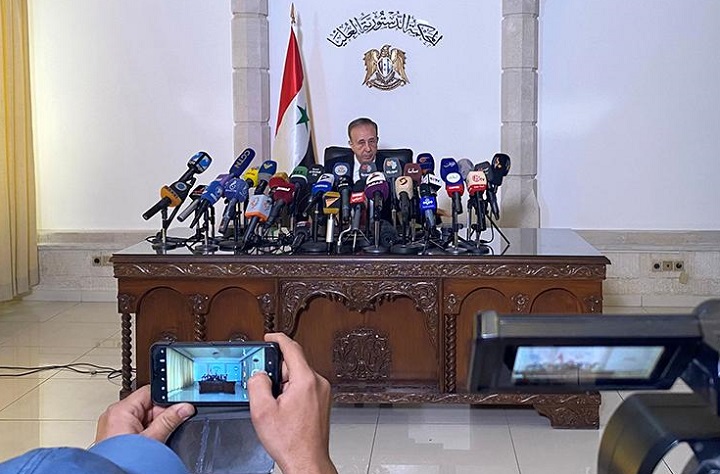 On Monday, 5/3/2021, the Supreme Constitutional Court announced the names of the candidates running for the Syrian presidential elections to be held, and they are: Bashar al-Assad, Abdullah Salloum Abdullah and Mahmoud Ahmad Marei, and the Syrian People’s Assembly has set the 26th of May as the date for it.

Elections are one of the means of access to government, and they are in a democratic system based on statutory laws and statutes that separate Islam from the state and society, and therefore participation in them to establish rule other than what Allah Almighty has revealed is forbidden as long as they authorise the ruler to implement the constitution of Kufr and the laws of Kufr that people put in place, so how can we be satisfied with that and Allah (swt) says:

“But no, by your Lord, they will not [truly] believe until they make you, [O Muḥammad], judge concerning that over which they dispute among themselves and then find within themselves no discomfort from what you have judged and submit in [full, willing] submission.” [TMQ 4: 65].

The political purpose of the Syrian election farce play is to try to restore legitimacy to the system of murder and criminality; and give it new support until the political solution that America wants and with it its tools matures to eliminate Ash-Sham revolution, and to plant more despair in the souls of those who supported the revolution in order to eliminate the flame of the revolution in the souls of its people.

A decade has passed since Ash-Sham revolution. It sacrificed its most precious and valuable to get rid of injustice and tyranny, get rid of compulsory rule and aspire to live under the justice of Islam, and the disbelieving West and its tools during these ten years had a great role in stabilizing the tyrant of Ash-Sham and protecting him from falling.

During this period, the tyrant of Ash-Sham held mock presidential elections in 2014. Without the international community moving a finger, it continued in its position practicing murder and criminality to this day, and now it is repeating the cycle again. In a desperate attempt to legitimize it, after he destroyed the country and killed more than 1.5 million Muslims, and displaced millions from their homes, in addition to hundreds of thousands of detainees in death cells and prisons of oppression and torture.

Would we accept that we elect the killer of our children, the displacer of our people, and the destroyer of our towns, to rule us again with the constitution of Kufr and the laws of Kufr?!

Can the conspirators succeed in deceiving the people of Ash-Sham, as happened with our people in Egypt and Tunisia before? Where they distorted the revolution and only changed the head of the previous regime, while its constitution, pillars, and regulations remained?!

“And whoever does not judge by what Allah has revealed – then it is those who are the disbelievers.” [TMQ 5:44] and He (swt) says:

“And whoever does not judge by what Allah has revealed – then it is those who are the defiantly disobedient.” [TMQ [5:47]

On the other hand, everyone should know that even if the tyrant of Ash-Sham does not succeed in the elections despite their pre-determined results; nothing will change from the matter and the reality will not differ, and we will continue to suffer under the tyranny of oppressive rule, moving from one tyrant to another tyrant, and from one agent to another agent. They are all the same as long as the man-made constitution, which is the cause of our misery and our distress in our lives, is the basis of their rule. Allah (swt) says:

“And if there should come to you guidance from Me – then whoever follows My guidance will neither go astray [in the world] nor suffer [in the Hereafter].And whoever turns away from My remembrance – indeed, he will have a depressed [i.e., difficult] life, and We will gather [i.e., raise] him on the Day of Resurrection blind.” [TMQ 20:123-124].

The real and radical change will be through the resumption of the Islamic life by establishing the Khilafah Rashida (the Rightly Guided Caliphate) upon the method of the Prophethood, the return of which the Messenger of Allah (saw) preached, and which will end the era of oppressive rule. And uproot it from its roots, and then apply the laws, constitution and rules of Islam and cut off the hands of the Kafir West from tampering with the Muslim countries. Candidacy in it will be based on the basis of Islam and its rulings in all spheres of life. The Almighty said:

“Legislation is not but for Allah. He has commanded that you worship not except Him. That is the correct religion, but most of the people do not know.” [TMQ 12:40].