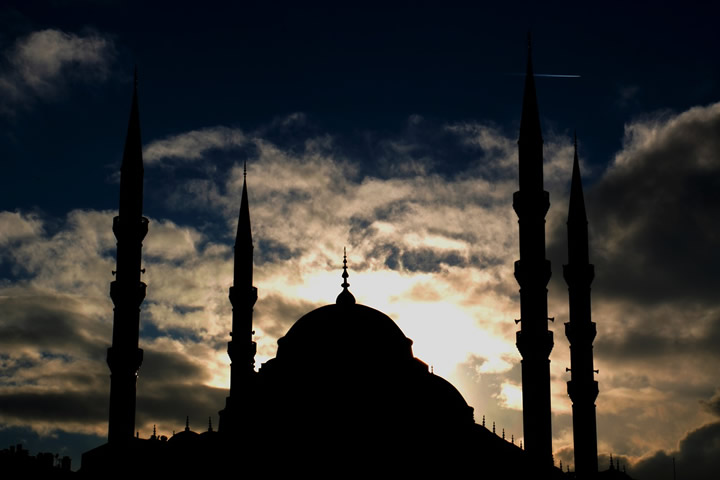 As Muslims eagerly await the arrival of the glorious month of Ramadhan, seeking the bounties within it and gaining closeness to Allah (swt) – it may be another year entering and leaving Ramadhan being divided. The pain of being divided as an Ummah by artificial political borders and nationalism, imposed by the colonial powers with the destruction of the Khilafah (Caliphate), is constantly felt. Another pain is the difference that arises over the sighting of the moon for the commencement and end of Ramadhan.

From a time when Muslims globally started and ended Ramadhan together, by waiting on the announcement of the Khaleefah – today, we sadly differ and align to particular Masajid and/or countries and/or various arguments on how it should be calculated. This is another sad reminder of the impact of the absence of the Khilafah.

The obligation to begin Ramadhan and Eid is based on sighting:

In addition to the hadith mentioned above, there are numerous clear and unequivocal authentic Ahadith on this topic, where the Messenger of Allah (saw) orders us to start and stop fasting by the confirmed sighting of the new moon. These orders are binding and their violation is a sinful act just like the abandoning of any other obligation.

Using calculations to determine beginning or end of Ramadhan is invalid:

Despite some who allow calculations, we cannot substitute the actual sighting of the moon, as the aforementioned texts mention “رُؤْيَتِهِ” (sighting) specifically. All these Ahadith connected to the sighting of the moon contain this Arabic word “رُؤْيَتِهِ” which is derived from the word “رأى”. People who support the idea of calculating the birth of the moon for Ramadhan misuse the word “رأى”. While the word “رأى” could mean knowledge, it is not correct to apply this meaning here because of the following reasons:

The supports of calculation build their argument by suggesting that sighting the moon, is accompanied by a reason (‘illah) that the Ummah was unlettered «لَا نَكْتُبُ وَلَا نَحْسُبُ»“We neither write nor calculate” which justifies the command. Since the Ummah has emerged from its “unlettered state” and is able to write and calculate, it becomes essential to rely on calculation alone. However, this argument is incorrect due to the following:

“It is He who has sent among the unlettered a Messenger from themselves reciting to them His verses.” “We neither نكتب (write) nor نحسب (calculate)…” “نحسب” in the Hadith carries several meanings such as: we do not use astronomical calculations to determine the legal Shari’i beginning and end of the month; nor do we practice astrology, etc. “نحسب” does not mean general calculations because Muslims are commanded by the Shar’iah to follow the laws of Zakah and inheritance that involve extensive calculations.

2. Furthermore, even if this “condition” is considered an illah (reason), Qiyas (analogy) on this issue is invalid. Firstly, there can be no Qiyas in Ibadaat (ritual worships). Secondly, it contradicts the definite meaning in texts of the numerous Ahadith which clearly illustrate that the “sabab” (cause) for fasting is the sighting of the moon (like the setting of the sun is the sabab for Maghrib prayer).

Therefore, it is quite clear that the arguments presented to justify the beginning of Ramadhan through the use of calculations are invalid and haram. The only way to determine the arrival of Ramadhan is through sighting the moon.

The address in the Hadith text has plural word “رُؤْيَتِهِ” (sighting). There is no consideration for geography or distance – since any part of the world shares the same day and night, albeit at different times. Therefore, the command of fasting and of breaking the fast when the new moon is sighted is a command which addresses all Muslims all over the world.

As for the opinion of Abdullah Ibn Abbas (ra) who rejected the sighting of Al-Sham conveyed to him by Kurayb, who had travelled to Al-Sham from Madina and upon his return reported the sighting to Ibn Abbas (ra), the majority of scholars responded to this by explaining that this was the ijtihad of Ibn Abbas (ra). It is known that the Ijtihad of a Sahabi does not specify the generality of Qur’an or Sunnah. Moreover, this Ijtihad contravenes evidences mentioned above. Indeed, RasulAllah (saw) accepted the sighting of the travelers who came to Madinah from elsewhere. Some scholars argue that Ibn Abbas (ra) did not accept Kurayb’s testimony because to declare Eid two witnesses were needed. Ibn Abbas (ra) himself has narrated several Ahadith that use general words for sighting. So it is obligatory upon all Muslims to start Ramadhan together and celebrate Eid together. The sighting by any Muslim, anywhere in the world, of the crescent for the start of Ramadhan and Shawwal is legally binding upon all Muslims.

Even the scholars, who take this semblance of evidence (شبهة الدليل) of the narration of Kurayb, define the Matl’a (horizon) with regards to the Moon differ on the distance after which a new Matl’a starts. Some scholars take the distance after which qasar (shortening) of prayer becomes allowed (a maximum of 72 miles as per one opinion), while others consider a month’s journey (500 or 600 miles) as the extent of a Matl’a.  These distances prevent the possibility of using current political boundaries as a single Matl’a. Interestingly, the primary evidence used for local sighting, the narration of Kurayb, suggests a different Matl’a within the political boundaries of the Khilafah state. To summarize, the local sighting is a weaker opinion and more importantly its current application does not have a basis from Shar’ah. Rather the current Westphalian nation state boundaries drawn by the colonist powers are taken as the basis for the current Matl’a definition. This further deepens the political divide and promotes nationalism among the Muslims all over the world.

O Muslims! When you hear that a Muslim country, any country, no matter how near or how far, declares that it has been confirmed according to the lawful way that the new moon of Ramadhan has been sighted, you must begin your fast, and you are forbidden to wait for the ruler or the Mufti in your part of the world to give you permission to fast, and when you hear that a Muslim country, no matter how near or how far, has declared that the sighting of the moon of Shawwal has been confirmed, by relying on the method recognized by Shari’ah, you must break your fast and celebrate the Eid, you are forbidden from waiting for the ruler’s or the Mufti’s permission to celebrate Eid. You fast and you break the fast by the command of Allah (swt) and His Messenger (saw), not by the command of those rebellious and mischievous rulers, and not by the command of those Muftis who are more anxious to please the rulers rather than to please Allah (swt). Mu’az (ra) narrated: I said: O Messenger of Allah. What do you think if we had leaders who do not follow your Sunnah and do not adopt your order; in what do you order regarding their affair? The Messenger of Allah (saw) said: «لَا طَاعَةَ لِمَنْ لَمْ يُطِعْ اللَّهَ عَزَّ وَجَلَّ»“There is no obedience to the one who does not obey Allah ‘azza wa jall.’”

O Muslims, may Allah (swt) make Ramadhan a month of obedience, worship and reward for each of us.

O Muslims, the Ummah yearns for unity and Ramadhan should be a practical manifestation of this unity. This can only be achieved under the shade of the Khilafah.