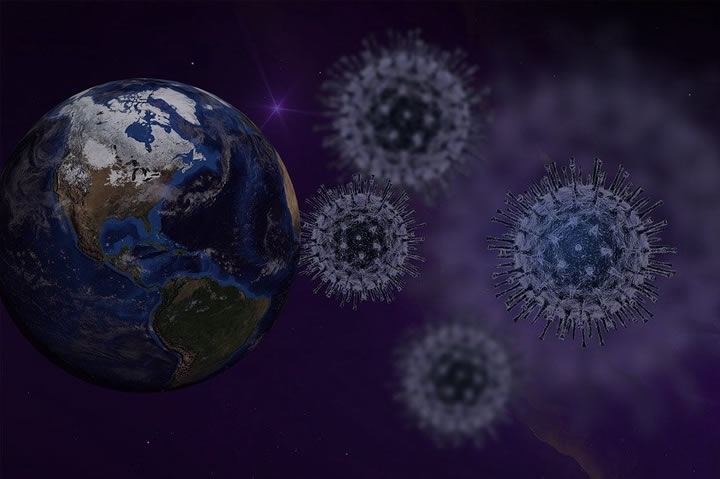 Epidemics and disasters are facts of life for humanity that responsible leadership must strive first to avert and then to mitigate. The Khilafah (Caliphate) will succeed, where the current rulers of Muslim countries have failed in a mostly humiliating way, and where the leading capitalist powers have disappointed the expectations of their peoples and others who slavishly hoped for salvation to come from them.

The rulers of the Muslim world have led the Ummah to deeper depths of stagnation as the years have passed in a century of humiliation without the Khilafah state. While they harass and imprison the dawah carriers and smother voices of opposition, and while they fly the flags assigned to them by the colonialists and force the people to stand up for loud singing of patriotic songs that boast of state-power and independence, the rulers have replaced innovation and sound political leadership during the Covid-19 epidemic with the rattling of begging bowls for international donations and support. They closed mosques and shut down business and trade, but could neither contain the epidemic nor support the health needs of the people.

The leading capitalist countries also failed. Their democratic systems were incapable of taking the fast and decisive actions necessary to stop the epidemic from entering their countries and becoming a pandemic. They watched China, which was slow to announce the danger to the world, but were even slower themselves to take action once the danger was known. Covid-19 entered their countries one after another, and one after another, they took drastic action to close down their economies and restrain people in their homes but only when it was too late. China restrained people in their homes, but only in the infected area, and as a non-democratic country they were able to eliminate the virus. They forced people to wear masks in public and did not wait for the World Health Organization to belatedly admit that masks were essential for all people in the infected areas. The WHO told people not to wear masks in the first months of the crisis, although masks are a highly effective control measure. The reason for this advice was due to a fundamental failure of capitalism.

There was a worldwide shortage of personal protective equipment for medical staff, and the WHO wanted to prioritize what little stocks were available for medical staff. This was true even in the richest capitalist countries that had been aware of the potential for a pandemic virus to appear at any time after earlier outbreaks of SARS and MERS and the history of bird flu and swine flu. Surely, these massive economies had the wealth to be prepared, but they were not prepared. Furthermore, their ideology made them impotent to produce what was needed, because the price mechanism determines what is produced and how much and who should receive it and who should go without. In desperation, all they could do was throw money at any supplier or agent promising to be able to deliver. Fortunes were made by some, and defective material and uncompleted contracts were common despite payment in advance. Government departments started to act as pirates diverting shipments through their countries and holding back supplies at their borders in the scramble for masks and other protective clothing. The same was true of testing kits, and now the same piracy continues with vaccines. The price mechanism is the holiest tenet of Capitalism, and it is supposed to act as what Adam Smith called an ‘invisible hand’ guiding the production and distribution of goods. The free market economy dominated the end of the last century with the doctrine of globalization. Let every country compete in a single market without barriers so that each country must depend upon others to meet their national needs. The result has been a mad scramble for essential supplies as countries paid the price for not producing their own essential goods. Globalization has been a weapon to impoverish smaller countries and increase their dependence on the West, but the doctrine of a free and open global economy has now caused great pain to its proponents.

The Muslim Ummah is rich in material and intellectual wealth, but the poverty of the Muslim rulers may have masked the failures of capitalism in the eyes of some and clouded hopes for a new resurgence coming from within our Ummah. The leading capitalist countries did finally succeed in making the vaccines, which people in poorer countries looked forward to knowing that their own countries would not innovate such things unless it was as part of deal to help market and test the Western products. Western text books and media have falsely credited Edward Jenner for the concept of vaccination when in 1796 he used Cow Pox virus as a vaccine to protect against Small Pox. Actually, it was the Ottoman world that brought awareness of vaccination to England. Small Pox killed about half a million people in Europe each year during the 18th Century, but the Muslim world was largely protected from Small Pox due to vaccination. In 1718 Lady Montagu, whose husband was ambassador to Turkey, had her six-year-old son vaccinated in the capital city of the Ottoman state. She wrote to a friend “…I am going to tell you a thing that I am sure will make you wish yourself here. The small-pox, so fatal, and so general amongst us, is here entirely harmless by the invention of ingrafting, which is the term they give it. There is a set of old women who make it their business to perform the operation every autumn…. Every year thousands undergo this operation…. There is no example of any one that has died in it; and you may believe I am well satisfied of the safety of the experiment…. I am patriot enough to take pains to bring this useful invention into fashion in England; and I should not fail to write to some of our doctors very particularly about it.” Lady Montagu was one of many Westerners who wrote about the success of vaccination in all parts of the Muslim world.

“If you get wind of the outbreak of plague in a land, do not enter it; and if it breaks out in a land in which you are, do not leave it.” (Narrated by Bukhari in his Sahih from Usama Bin Zaid) In another Hadith in Bukhari and Muslim, and the version is from Muslim from Usama Bin Zaid, the Prophet (saw) said:

This practice of quarantine was applied to infected areas and establishes a Shariah evidence for stringent isolation of infected towns or regions from other regions without forcing everybody to stay at home in the infected and uninfected regions. The democratic countries were too scared in almost all cases to differentiate areas and take early action, and once the scale of death became huge and there was public outrage and collapse of their health systems they were too scared not to close down their entire countries with tremendous economic losses! The big tech industry did benefit from the need for internet connectedness replacing physical interaction in teaching, shopping and entertainment. Ruling in Islam is for the pleasure of Allah, rather than a popularity contest between politicians slavishly checking their approval ratings.

In addition, the industry of the Khilafah state will be established on the basis of being able to carry the message of Islam to the world and providing the needs of the people without reliance upon outside countries. This does not preclude extensive trade with other countries, as long as self-sufficiency in essential goods is achieved. The Khilafah state will not abandon its responsibility for providing the material supplies, drugs and vaccines upon which healthcare depends to the private sector alone. Where the private sector craves monopoly, the health needs of the Ummah crave satisfaction regardless of price reward. If a vital vaccine is available and the means to produce it can be established in one factory, then this can and should be reproduced in 20 factories in parallel.

After a century of failure and division under dozens of regimes subservient to the West it is clear that the time for reestablishing the righteous Khilafah system is now, and that the West can never provide the good leadership that the world craves.