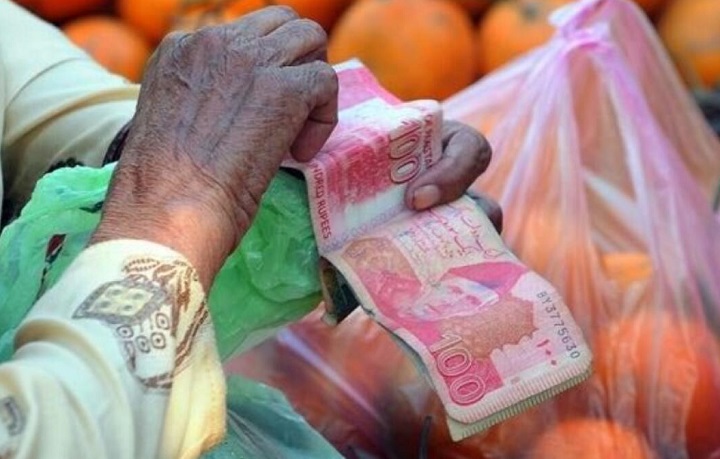 By November 2021, the Rupee fell to 175 Rupees to a dollar, unleashing crushing inflation
upon the citizens of Pakistan. Inflation is a permanent feature of the capitalist economy, irrespective of the re-opening of the economy after lockdown. Unlike Islamic gold and silver currency, fiat paper money loses its purchasing power, as governments print more to finance ever growing interest-based debt. 67 years after the US abolished the gold standard for its dollar in 1934, the Consumer Price Index for inflation shot up 625%.

However, in the 67 years before 1934, the CPI increased only 10%. Since 1933, the US dollar has lost more than 90 per cent of its value with respect to gold. Gold has maintained its value whilst fiat currency has lost its value, causing rampant inflation. Between 1771-1971, the gold price was stable, at between $20 and $35 per ounce. Since Nixon disconnected the dollar from gold entirely in 1971, the price of gold has climbed to nearly $1,800 per ounce, in November 2021. Silver has also maintained its value whilst fiat currency has plunged in value, causing rampant inflation. By 1546, the Islamic ruler, Sher Shah Suri, had issued the Rupee weighing 11.5g of silver. However, now that the Rupee is fiat currency, it has weakened to the point that 1495 Rupees buys 11.5 g of silver, in November 2021. So is there any surprise that there is global inflation?

Islamic currency ends rampant inflation because it is based on gold and silver, which are
valuable, rare and impossible to make, thus stabilizing prices. Islamic currency imposes discipline on both government spending and its collection of revenues, whilst Islam forbids interest and fractional reserve banking which are huge inflationary pressures on money supply. The Deen of Islam did not leave the state to issue money on any basis whatsoever, such as the current paper fiat money, which is backed by legal authority, rather than intrinsic wealth. In Islam, the Khilafah issues currency backed by available gold and silver alone. The evidence for this is that Islam connected Shariah rulings with gold and silver alone. Allah (swt) obligated the Nisaab of Zakah upon gold and silver alone. This indicates that there is no consideration for any other type of money as currency, such as the paper fiat currency, in the economy of the Islamic state. The Messenger of Allah (saw) specified currency exchange with gold and silver alone, which is a clear evidence that the currency must be from gold and silver and nothing else.

“Gold for silver is interest unless it is exchanged hand to hand.” (Bukhari and Muslim).

The Messenger (saw) specified gold and silver as money. The measures for this currency were the awqiya (الأوقية), the dirham (الدرهم), the daniq (الدانق), the qirat (القيراط), the mithqal (المثقال) and the dinar (الدينار). All of the trade and marriages took place with gold and silver, as has been confirmed by several authentic narrations. Islam specified the gold dinar as the Islamic currency in laws related to punishment and blood money.

For example, the Messenger of Allah (saw) said,

“Do not cut (the hand) except for a quarter of a dinar or more.” (Muslim).

O Muslims of Pakistan! Hizb ut Tahrir / Wilayah Pakistan calls you to action for the pleasure of
Allah (swt). Call for the gold and silver currency that the Messenger of Allah (saw) declared. Call for the end of the usurious American economic order that has impoverished humanity. Work with Hizb ut Tahrir for the re-establishment of the Khilafah that will implement Islamic ruling on gold and silver currency, as well as ensure the prohibition of the evils of interest and fractional reserve banking. Demand that your relatives in the armed forces of Pakistan grant their Nussrah to Hizb ut Tahrir for the re-establishment of the Khilafah (Caliphate) on the Method of Prophethood.