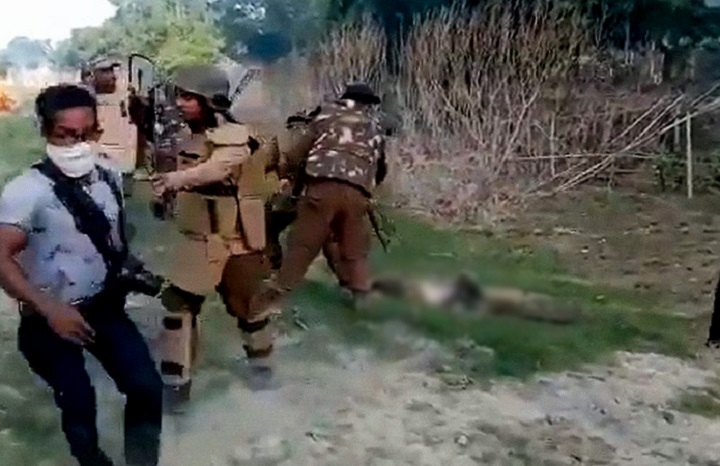 The Danish Prime Minister, Mette Frederiksen, went on a 4-day official visit to India in mid-October. Pompous ceremonies were held between her and the Prime Minister of India, Narendra Modi. The Danish Prime Minister expressed friendship as well as her admiration of Modi, and even echoed his “Nation First”-slogan during a joint press conference held by the two Prime Ministers. She did this whilst she was well-aware that this slogan is driving Modi’s hateful and ruthless policies against India’s Muslims.

Comment:
Frederiksen’s visit happened amidst the brutal persecution of Muslims in India’s eastern Assam-province where ethnic cleansing is still ongoing. Images of Moinul Haque’s lifeless body went around the world. The manic trampling of the Assam resident’s pierced corpse. He was stomped upon by an Indian photographer, Bijoy Bania, in front of armed Indian police. The stomping has since been dubbed the “Dance of Death” by several international media.

The “Dance of Death” has become the symbol of the cruel enmity against Islam that characterizes India today. The Prime Minister of India, Narendra Modi, and his Hindu nationalist party, the BJP, have pursued an anti-Muslim policy since coming to power in 2014. The persecution of Muslims in Indian has become so aggressive that the American Time Magazine, in an article written on the 4th of October 2021, poses the question: “Is India Headed for an Anti-Muslim Genocide?”

Modi is a declared supporter of the violent and fascist Hindutva movement, whose bloody attacks on Muslims and other religious minorities in India are called “saffron terrorism”. In 2019, he was behind the brutal annexation of the Muslim-dominated Kashmir region, whose people throughout decades have been subjected to arbitrary arrests, kidnappings, torture and rape by the Indian Army, which has over half a million soldiers stationed in the region.

Narendra Modi has pushed for a policy that alienates parts of India’s Muslim minority by declaring them “illegal immigrants” despite the fact that they are either natives or have lived legally in India for decades.

In India’s northeastern Assam province, the government is carrying out ethnic cleansing of the region’s Muslims. The reason is the demographic development in the province, which will soon transform the Muslims from a minority to a majority in the province. So far, the Indian authorities have destroyed homes in Assam belonging to 1300 Muslim families in just two weeks.

Moinul Haque, the victim of the “dance of death” was a resident of the village, Sipajhar, in Assam province, and was involved in protesting against the government’s aggressions. Pictures, as described by Al-Jazeera, reveals him getting shot down by Indian policemen, who continues to attack his defenseless body with sticks. One of the police photographers then stomps on Haque while there are still signs of life from him. After life has disappeared from Haque’s body, the photographer returns to perform his death dance. Pictures show him hugging the cops afterwards.

These events took place in the same period of the official Danish visit. Yet there has been no trace of critical media coverage of the Prime Minister, Mette Frederiksen’s recent visit to India. Neither in international, European nor in local Danish media. No one has dared to highlight the hypocritical Western support of the persecution of India’s Muslims. The local Danish press coverage has even been positive, such as the article by the TV2-station with the title: “Modi gives Mette Frederiksen the great Indian welcome”.

The Western support of Modi’s crimes is no surprise. This is what one can expect of Capitalist states that have spent three centuries colonizing the Muslim world. The Muslims of India will only find support when the Islamic Caliphate is reestablished. May Allah (swt) make this happen soon so they can be rescued from the Hindu-cruelties.