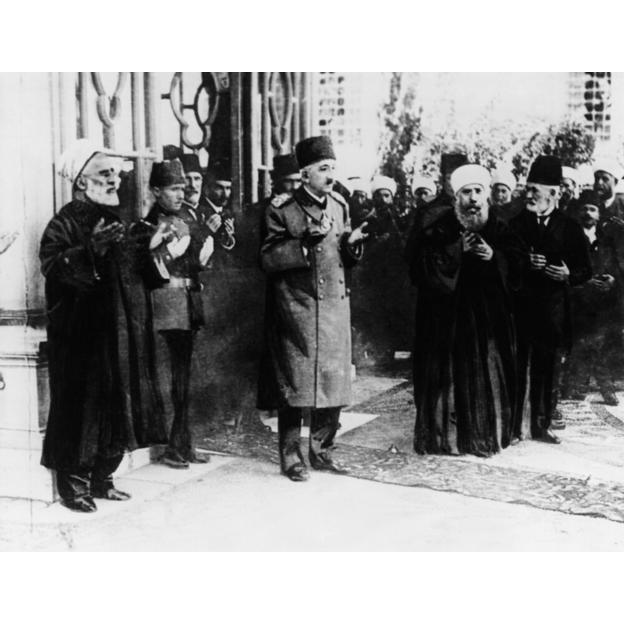 The Ottoman Caliphate, precursor to the modern-day country of Turkey, was a caliphate like no other. The Ottoman Caliphate stretched over the span of six hundred years, and at its heights it controlled the land between the rivers of Tigris and Danube, stretching from the provinces of Europe to the territories of the Middle East, and was feared and respected by its neighbors of the East and the West. It began during an era of feudal Anatolia in the thirteenth century, after the decline of the Seljuk Sultanate of Rum; a beylik (principality) in the region of Bithynia on the frontier of the Byzantine Empire. It was led by Osman I who began expanding its area of control along the Sakarya River. The army of Osman (from which the name Ottoman was derived) conquered Byzantine town after town along the said river, and the defeat of Byzantine forces at Bapheus under the command of George Mouzalon contributed to his popularity. Thus was how the Ottoman begun; from an obscure beylik, expanding itself by consolidating control over the region of Anatolia.

In the century afterwards, the Ottoman power extended from beyond the Anatolia, entrenching itself in the Balkans. This was followed by many campaigns, all aimed at either wresting control of the Balkans or Anatolia from the Byzantines or supplanting the Serbian power that resided north east of Ottoman territories, a feat achieved after the capture of the Serbian capital of Kosovo. Under Orhan I, son of Osman, the city of Bursa, then under the Byzantines, was seized, effectively ending Byzantine control and dominance in the region. This trend of perpetual warfare continued during the reign of every Sultan thereafter; all aimed at neighboring European powers, especially the Byzantine Empire; up to Bayezid I, who was defeated and captured by Timur the Lame (the Turco-Mongol conqueror) in the Battle of Ankara, from which time, until the emergence of Mehmed I became a period of chaos and anarchy in the Ottoman state.

After the restoration of the Ottoman Sultanate under Mehmed I, which succeeded the state of disorder known as Fetret Devri, or civil war, the Sultanate continued to build on its territories, liberating more and more lands into its hands. The regions lost after 1402 when Timur detained Bayezid I, was recovered by Murad I, including the port city of Thessaloniki, Macedonia and the former Siberian capital of Kosovo. Murad’s son, Mehmed II, also known as Mehmed the Great, accomplished the greatest achievement of all time; breaching and successfully opening the previously unconquerable Constantinople, earning for himself the prophesied title of “best leader”, and his army the “best army”, as prophesied by the Messenger of Allah (saw) in his famed hadith, as narrated by Abdullah ibn Bishr Al-Khath’ami and reported by Imam Ahmad:

The crux of Ottoman power came under the reign of Suleiman the First, also known as Suleiman the Magnificent. The Ottoman Sultanate under him was the biggest it has ever been and will ever be, and under him too was formalised the first separation of sultanic (Qanoon) and religious (Sharia) law, when he officiated the making of the Qanooni laws, which collected became known as Qanoon Osmani (قانون عثمانی), or the “Ottoman laws”.

Besides the almost habitual trend of Sultans leading armies to war against European powers, and ruling the vast lands of the State, the Sultans were also implementing the laws of Islam, or Sharia as the law of the land. During the reign of Suleiman the Magnificent himself, the Abbasid Caliph of the time stepped down and paved way for Suleiman to become the next Caliph, making him the overall ruler of the Muslim world. Under the Ottomans once more was the glory of Islam spread across the world, and its enemies kept in check, up until the point when the Caliphate finally collapsed. The darkest day of the Muslims, the loss of the shield of the Ummah, of the Caliphate’s fall, came on the 28th of Rajab, 1342 AH.

The decline of the Caliphate was slow in coming. It was not the concerted swing of the sword that was the First World War alone that decimated the Caliphate, nor was it the result of multiple military threats either. The collapse of the Caliphate was an agonisingly slow process, taking well over a century; from the death of Suleiman the Magnificent, to the dethroned Sultan Abdul Majid the Second. It was the culmination of factors, both internal and external that finally diminished the Caliphate to a weak state, and the last blow was given in its last throes after the First World War. The Muslims’ understanding of Islam in its comprehensiveness began to fade as a level of scholarship began to fade and attention to the Arabic language and ijtihad also faded.

The implementation of Islam also saw cracks as provinces were given more autonomy than centralised ruling demands, as mis-implementation of the bay’ah (oath of allegiance) became a commonplace and as some political groups sought to impose their sectarian views by force. The Ummah faced a general intellectual decline, which also resulted in scientific and technological stagnation. Military and economic innovation in Europe, along with inflation that took over the Caliphate after the discovery of precious metals in the Americas, and various political disputes that occurred internally, all combined to make the Caliphate “The Sick Man of Europe”; and the “Sick Man” was finally crushed after its defeat in World War One.

It first began with internal problems, right after the death of Sultan Suleiman the First. Due to the Sultan’s refusal to participate in national administration in his last days, the position of Grand Vizier became second to that of the Sultan, with powers and authority similar to the shogun during the period of Japanese Warring States. The separation of political loyalty (for Muslims everywhere must pledge fealty to the Sultan) and central authority (the Grand Vizier) marked a new era of manipulation, deceit and power struggles, brought about especially by the emergence of the Devshirme (reverted Christians). The Devshirme, who made up the elite troop of Janissaries, used their military prowess in seizing Timars (feudal lands) from various members of Ottoman nobility; a move that crippled the Sipahis, cavalry supported by produce of such lands, much like the feudal system. The seizure of estates also deprived the state of one of its sources of revenue; revenue from the produce of the lands, and the service of many Sipahis. Few of the Sipahis remained, with the Jannissaries and the Artillery Corps becoming the main arm of the army.

With the rise of the Devshirme, came a series of cases of corruption and nepotism. The harem of the Sultans also became influential in such cases, going as far as imprisoning young princes in the harem; this came after the power of the viziers was also reduced. As a result, few Sultans exercise power; their knowledge inhibited, and intelligence limited, naturally the power fell to a multitude of political factions, populated by the Devshirme, the women of the harem from 1570 to 1578, then into the hands of Agas¸ officers of the Jannissary. These power struggles contributed to general growing unrest, and this, in turn, paralysed the administration, instigating even more anarchy and misrule.

Internal problems were only half the trouble for the Caliphate. External problems, in the form of economic and military difficulties, compounded upon the issues the Caliphate was facing. The old trade routes that ran through the Middle East were not used any more by the British and the Dutch, decreasing Middle Eastern prosperity. The economy was then disrupted by a sudden inflation, brought around by an influx of precious metals, such as gold, silver, copper, and the like that came from the Americas. The consequences of corruption present throughout the Caliphate also caught up to the state treasury, leading to further over taxation, theft and general pandemonium. The capitulations, a series of armistices, pacts and treaties between the Caliphate and the rest of Europe also promoted many Christian subjects, merchants and diplomats into Ottoman territories; this drove out the Jewish and Muslim subjects of the Caliphate from industry and commerce.

Military innovations, which underwent rigorous developments in Europe, a consequence of years of continental conflict and rapid tactical evolution that came every fifty years or so, made many European armies stronger than the Ottoman army, which was still stuck to ancient military traditions and did not apply modern tactics. As an outcome, the Ottoman military strength was notably diminished, posing enough of a threat only to colonial troops, but cannot affect European powers in general, even after reforms were implemented. Sensing failing Ottoman strength, many European colonial powers exploited it in many ways; the Balkan Wars deprived the Caliphate of its Balkan holdings, the Italo-Turkish Wars drove the Ottomans from North Africa, and the territories in the Middle East came under the sphere of the influence of the French in Syria, the British in Persia and the Hijaz, and the Russians in Persia. These spheres of influences of multiple colonial powers made for a series of events that further weakened the shrinking Ottoman state. By the First World War, the Middle East became a hostile area to Ottoman troops, beset by rebels and revolutionaries.

Back at home, in Turkey, the people’s discontent and dissatisfaction showed. The answer to the people’s woes came in form of the Young Turks Revolution (after a succession of a coup d’etat and a counter-coup), which spearheaded the Second Constitutional Era (the first being the coup). By the 1st of November 1922, the formal abolition of the Sultanate was carried out by the Grand National Assembly of Turkey. On the 28th of Rajab 1342 AH, the Sultan was dethroned and deposed, and by the subsequent month, he was declared persona non grata to the now-secular Republic of Turkey. The collapse of the Ottomans marked the end of over 1300 years old Caliphate and brought calamities throughout the Muslim world.

Throughout the years following the fall of the Caliphate, attempts were made by several movements to re-establish it – a struggle which still resonates up to this day towards fulfilling this noble obligation. This year marked the 100th year of calamities and despair following the demise of the Caliphate. Now, this responsibility is shouldered by the entire Ummah to fulfil the prophecy of our Prophet, Muhammad (saw) – the return of the second Caliphate based on the method of the Prophethood.