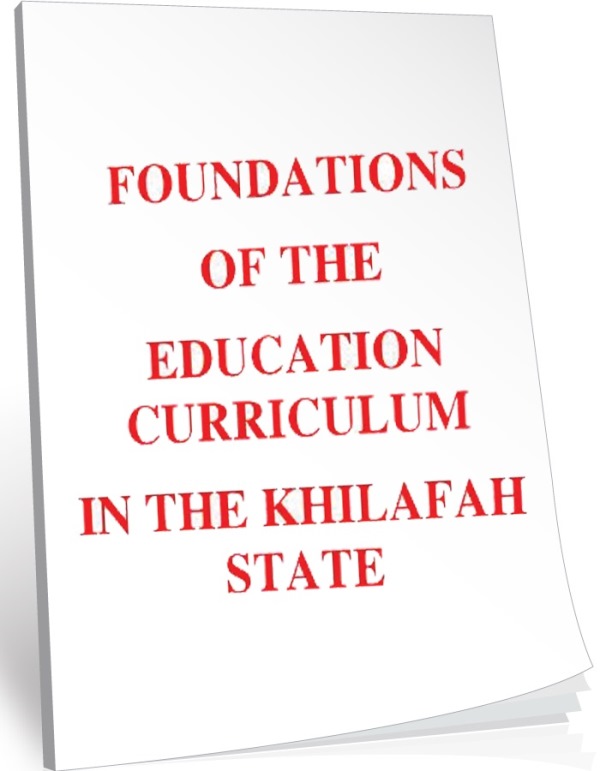 FOUNDATIONS OF THE EDUCATION CURRICULUM IN THE KHILAFAH STATE

Download the Timetable of School Courses according to Student Ages.

The culture (thaqafa) of any nation is the backbone of its existence and survival. Based on this culture, the Ummah’s civilisation (hadhara) is founded, and its goals and objective are defined, and its way of life is defined. The individuals of the Ummah are moulded by this culture in one melting pot such that the Ummah becomes distinguished from the other nations. This culture is: The Ummah’s intellectual doctrine (‘aqeedah) and the rules, solutions and systems emanating from this intellectual doctrine. It is also the knowledge and sciences built upon it, as well as the events linked to this intellectual doctrine such as the Ummah’s conduct (Seerah) and history. If this culture is wiped out, this Ummah, as a distinct Ummah, would disappear; thus its objective and way of life would change, and its allegiance would shift, and it would stumble in its path following other nations’ cultures.

The Islamic culture is the knowledge (ma’arif) stimulated by the Islamic intellectual doctrine. This is regardless whether this knowledge includes the Islamic doctrine like the science of “tawheed”; or is built upon the intellectual doctrine such as jurisprudence (fiqh), exegesis (tafseer) of the Qur’an, and the Prophetic traditions (hadith); or whether it is a prerequisite to understand the rules emanating from the Islamic intellectual doctrine such as the knowledge required for ijtihaad (scholarly exertion) in Islam, such as the sciences of the Arabic language, classification of the Prophetic traditions (mustalah al-hadith), and the science of the foundations of jurisprudence (Usul). All of this is Islamic culture because the Islamic intellectual doctrine is the motive for its research. Similarly the history of the Islamic Ummah is a part of its culture due to what it contains of news about its civilization (hadhara), men (rijal), leaders and scholars. Pre-Islamic Arab history is not part of Islamic culture whereas pre-Islamic Arab poetry can be considered part of this culture due to what it contains of evidences that help understanding of the words and syntax of the Arabic language, and consequently help in the making of ijtihaad, tafseer of the Qur’an and understanding hadith.

The Ummah’s culture creates the character of its individuals. It moulds the individual’s intellect and his method of judging things, statements and actions just as it moulds his inclinations, thereby influencing his mentality, disposition (nafsiyya) and behaviour (sulook). Thus, the preservation and spread of the Ummah’s culture in the society is among the chief responsibilities of the State. The Soviet Union historically fostered its children upon Communist culture and attempted to prevent any infiltration of capitalist or Islamic thought into its culture. The entire West nurtured its children upon its capitalist culture that is built upon separation of religion from life. It organised and founded its life upon that basis, and waged wars -as it continues to do so today – to prevent the Islamic culture from penetrating its doctrine and culture. The Islamic State endeavoured to implant the Islamic culture into its children and prevented anyone from calling within the state for any thought not built upon the Islamic intellectual doctrine within the State. The state also carried its culture to other States and nations via Da’wah and Jihad. This will continue until Allah inherits the earth and whoever resides on it (i.e. until the Day of Judgement).

Among the most important guarantees of the preservation of the Ummah’s culture is that its culture be memorised in the hearts of its children and preserved in books, together with the Ummah having a State ruling over it and taking care of its affairs according to the rules and canons emanating from the intellectual doctrine of this culture.