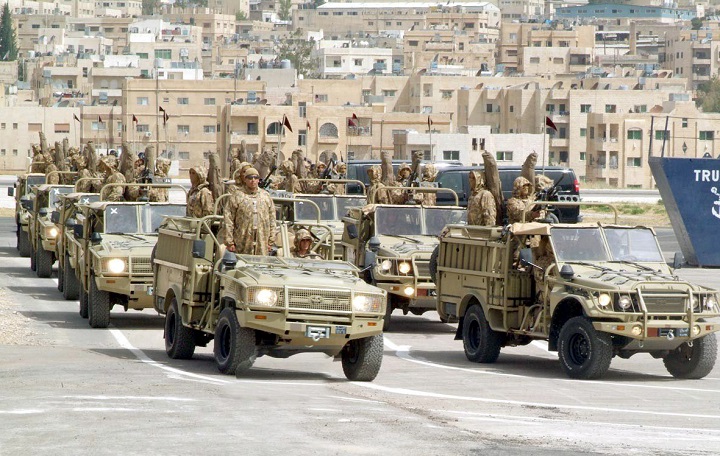 Those who have evoked Allah’s wrath would not have wreaked havoc in the first Qiblah had it not been for the complicity of the traitorous rulers of the Muslims and the failure of the leaders of the armies, and if it were not for the weakness that shackles the Ummah!

As for the complicity of the rulers, it is worse than words can say, and no one should think that their speeches and statements that come out from them heavy after the public pressure from the Ummah against them, that they are to show the truth or to nullify the falsehood, rather they are partners in the falsehood, and their words are nothing but ashes in the eyes, and their deception is no longer deceiving anyone, as their nakedness is exposed. Are they not the ones calling for the two-state solution, i.e. the right to the existence of a Jewish entity in Palestine?! Are they not the ones who sign peace treaties and agreements?!

As for those who praise the guardianship of the Islamic holy sites in Beit al-Maqdis (Jerusalem), this guardianship is another excuse for inaction, but rather for collusion with the enemies, because the true guardianship is not by sending carpets to its land! Rather, it is sending armies to liberate it. Those who consider their guardianship over Al-Aqsa a favor are the ones who signed the Wadi Araba Agreement, and they are the ones who protect the borders of the occupation entity, and they plan with it. Indeed, their role and purpose of existence since they were created by colonialism was to preserve this malicious entity and protect it from the Ummah. Those who claim taking care of Bait-ul-Maqdis are the wolves who betray, and they are the first to normalize, and they are the ones who want the existence of Jews to remain, for it and them are twin halves, and their existence is dependent on each other!

O Muslims: Our condition does not please Allah or His Messenger, how can Allah and His Messenger be pleased with us, and our armies are stagnant in their barracks?! Their people seek victory from them and do not get a response! And Allah has made it obligatory upon the people of power from among the Muslims, including their soldiers and officers, and everyone in them who carries arms to be the ammunition and equipment of the Ummah, The Almighty said in His clear Revelation: ﴿وَإِنْ اسْتَنصَرُوكُمْ فِي الدِّينِ فعليكم النصر﴾ “if they seek your help in religion, it is your duty to help them” [Al-Anfal: 72]. And in the interpretation of His Almighty’s saying: If these believers called upon you for help with manpower or resource to save them, then help them, for that is an obligation on you, so do not disappoint, for bringing victory to them is a duty, so that our eyes do not blink until we go out to their rescue.

This is the state of the Ummah of one body, if one part of it complains then the whole body shares its pain. But if we remain idle and stagnant, then shame and disgrace befall those who possess power and do not move a finger.

O Muslims, O Muslims Armies: You are chained from supporting your Ummah and its causes, but are free to stand up to it! Your guns are forbidden from being directed towards the enemies of the Ummah, but are permitted to go towards your brothers, so loosen your chains, and disavow those who have dressed the Ummah with humiliation. Break away from those who made you see with your own eyes the violation of your honors, the occupation of your country, the infringement of your sanctities and your Shariah, and then keep you without a real movement towards salvation, towards dignity and honor, towards the revival of the Ummah with its religion and its Shariah.

The Ummah of Islam made its voice heard until it became hoarse of crying out and screaming, so where are you?! Where are you, O people of power, O Muslim armies, from the weeping of Muslim children, and from the wailing of women who seek help from us?! Say enough, stand on the side of your Ummah, gain the honor of glory by supporting your Ummah.

Had touched their ears, *** but it did not touch Al-Mu’tasim’s Chivalry!

Our master and our example Prophet Muhammad (saw) say: «مَا مِنْ امْرِئٍ يَخْذُلُ امْرَأً مُسْلِمًا فِي مَوْضِعٍ تُنْتَهَكُ فِيهِ حُرْمَتُهُ، وَيُنْتَقَصُ فِيهِ مِنْ عِرْضِهِ، إِلَّا خَذَلَهُ اللَّهُ فِي مَوْطِنٍ يُحِبُّ فِيهِ نُصْرَتَهُ، وَمَا مِنْ امْرِئٍ يَنْصُرُ مُسْلِمًا فِي مَوْضِعٍ يُنْتَقَصُ فِيهِ مِنْ عِرْضِهِ، وَيُنْتَهَكُ فِيهِ مِنْ حُرْمَتِهِ، إِلَّا نَصَرَهُ اللَّهُ فِي مَوْطِنٍ يُحِبُّ نُصْرَتَهُ» “No (Muslim) man will desert a man who is a Muslim in a place where his respect may be violated and his honour aspersed without Allah deserting him in a place here he wishes his help; and no (Muslim) man who will help a Muslim in a place where his honour may be aspersed and his respect violated without Allah helping him in a place where he wishes his help.” (Narrated by Abu Dawood)

Allah Almighty says: ﴿يَا أَيُّهَا الَّذِينَ آمَنُوا مَا لَكُمْ إِذَا قِيلَ لَكُمُ انفِرُوا فِي سَبِيلِ اللَّهِ اثَّاقَلْتُمْ إِلَى الْأَرْضِ أَرَضِيتُم بِالْحَيَاةِ الدُّنْيَا مِنَ الْآخِرَةِ فَمَا مَتَاعُ الْحَيَاةِ الدُّنْيَا فِي الْآخِرَةِ إِلَّا قَلِيلٌ * إِلَّا تَنفِرُوا يُعَذِّبْكُمْ عَذَاباً أَلِيماً وَيَسْتَبْدِلْ قَوْماً غَيْرَكُمْ وَلَا تَضُرُّوهُ شَيْئاً وَاللَّهُ عَلَى كُلِّ شَيْءٍ قَدِيرٌ﴾ “O you who have believed, what is [the matter] with you that, when you are told to go forth in the cause of Allah, you adhere heavily to the earth? Are you satisfied with the life of this world rather than the Hereafter? But what is the enjoyment of worldly life compared to the Hereafter except a [very] little. If you do not go forth, He will punish you with a painful punishment and will replace you with another people, and you will not harm Him at all. And Allah is over all things competent.” [At-Tawba: 38 -39].

So, go forth to Allah … Be with Allah, and on the side of your Ummah, seek the help of Allah and trust in Him, the solution is in your hands only, and remember, either honor or humiliation, either Heaven or Hellfire.

O Allah, be with our brothers and sisters who are stationed, be with our brothers and sisters who have no strength and no power except with You, and prepare the Ummah and its armies with sincere men, to make a new era that will end the humiliation of the Ummah. O our Lord empower our religion, enabled us to rule by your law, so that our armies will move according to Your command, strive in Your cause, and support Your religion, and fight for Your law, Ameen.