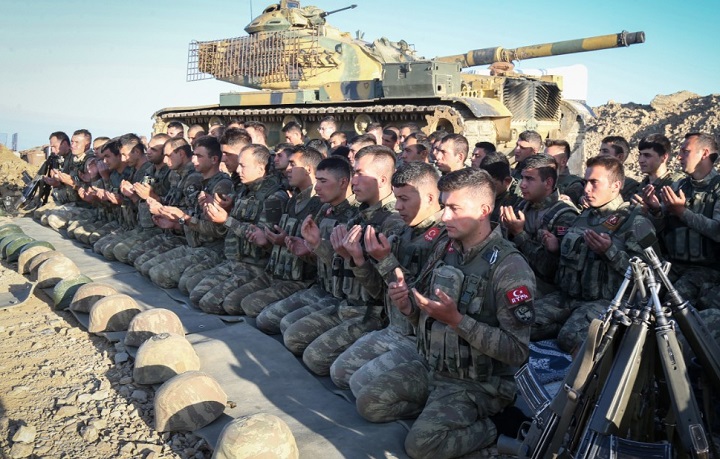 The people of Palestine are killed and their homes are destroyed atop their heads before the eyes and ears of the Egyptian army and all the armies of our Islamic countries; that boast of their arm race and the purchase of weapons from Western countries, that support the usurper Jewish entity of the Blessed Land Palestine and the killer of our people there. And which protect the shameful regimes that rule our country and protect the Jewish entity and prevent the angry peoples from supporting the people of Palestine, even it was with their bare hands!

It has become clear that the strategic mission of the regimes in Egypt, Saudi Arabia, Jordan, Turkey and Syria, i.e. those around and close to Palestine; was and continues to be securing the Jewish entity, and the war on Islam and the carriers of its call. For example, how many times has the Egyptian regime repeatedly besieged Gaza in the service of the Jewish entity?! And so far, it has not and will not support Gaza nor Palestine, and it will certainly not support Ummah’s issues.

Supporting the people of Palestine is not by opening the crossings or by receiving and treating the wounded and injured, nor by financing the reconstruction of homes whose inhabitants may have been killed! But it will be by moving the army to support them. This army that liberated Al-Quds in the past when Egypt was ruled by the Nasir (defender) called Salah ud-Din and when the Muslims had a state that implemented Islam and carried it to the world even if it was weak. The Nakbah, the Catastrophe, of Palestine was neither in the Balfour Declaration nor in the occupation of Jews. Rather, the catastrophe was before that, it was on the day the West demolished the Khilafah (Caliphate), the protector of Palestine and others.

Palestine and the people of Palestine do not need the sympathy of rulers and leaders who have sold themselves to the West at a low price. Rather, their real need is for the sincere sons of the Ummah in the armies, especially the army of Kinanah (Egypt), is the shield of this Ummah and the best soldiers of the earth as they like to be called and as they really should be…. this great caliber is only for the one who rejects and discards the borders of Sykes-Picot and cuts the ropes of his loyalty and obedience to the regimes of shame and agent and harming rulers, and moves the soldiers of the Kinanah with their vehicles and warfare to uproot the Jewish entity and liberate the entire land of Palestine.

You are not permitted to submit to these rulers, and stand idle and do not support the people of Palestine, but you must carry out work that support the people of Palestine and all the vulnerable sons of the Ummah everywhere. Your sincerity, obedience and strength that your Ummah entrusted you with, must all be for Allah Almighty, His Messenger (saw), His Deen and His Book, and no obedience to those who disobey Allah (swt) and divide the Ummah, dispersed its unity and work in it for the benefit and interests of its enemy.

This is your role and your duty, and by it alone you will be the best soldiers on the earth. Who will protect Islam and its sanctities, if not you? Who will support Islam other than you? So, show Allah the good in yourselves that He loves, and support Him (swt) by restoring His state and supporting your brothers and sisters, He (swt) will support you, He (swt) will grant you Paradise, and secure your reward.

Only the unity of Muslims will liberate Palestine under Khilafah Rashidah (rightly-guided Caliphate) on the method of Prophethood. You are capable and more deserving of giving victory to those who work to establish it. The whole Ummah looks to you and awaits the good in you as you are the source of its strength, and the people of Palestine are crying out to you and to your help; they have sent you call after call; isn’t there a man of reason among you who says to them: O people of Palestine, you are given the support, thus restoring the days of Salah ud-Din, so that the Ummah unites and its armies move towards Palestine and purify it from the filth and desecration of the Jews?!