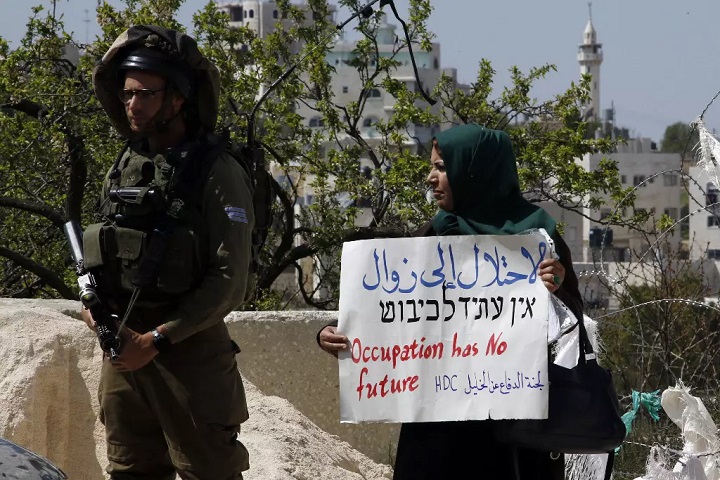 The American newspaper, the Wall Street Journal says that Palestinians in the occupied territories and inside the Jewish occupation have long been dispersed, whilst facing a variety of issues. Nevertheless, they have now found a common goal and voice in both Jerusalem and Gaza Strip, followed by the recent “Israeli” security and military escalation. The newspaper mentioned that the Palestinian-“Israeli” conflict has continued for generations, but added, “The latest round is producing something new. It has brought together Palestinians living in the West Bank, Gaza and Israel in ways unseen since 1948, the year of Israel’s creation.”

Comment:
Every political event that takes place in the Muslim Lands affirms the criminal collaboration of the rulers of Muslims, as well as the stance of the West towards the Ummah and its issues. This is whilst the Jewish entity is a fragile and artificial state, which could not confront Muslims in any fighting, regardless of the number of troops and their equipment, where victory always belongs to those loyal to Allah (swt).

Nevertheless, there are those who are always concerned with saving the Jews and their entity. The rulers of Arabs and Muslims are those who helped to create this entity, charging themselves with the responsibility of preserving the entity. Less than two weeks after the barbaric attack of the Jewish entity against the people of Gaza, unleashing arrogance upon the people of Jerusalem in the Blessed Land of Al-Quds and the Sheikh Jarrah neighborhood, the rulers remained motionless, after their betrayal of the people of Palestine. They simply began to call for ceasefire, after the Ummah around the world unified in support of the Blessed Land of Palestine, calling for the armies to mobilize.

They called for the ceasefire due to fear of the situation getting out of control in the Muslim Lands and for the protection of Jews from the Islamic Ummah, as came in the warning of the US President Biden to the head of Jewish entity, Netanyahu, in a phone call over matters getting out of hand. It indicates that the continuing assault against the people of Palestine may exacerbate matters against their interests. Thus the call for ceasefire by various regimes in the Islamic World, such as Turkey, Egypt, Pakistan and others, is to endorse the old American plan that is based on the two-state solution.

The media presented the ceasefire as a victory, although what is required is the joint mobilization of the Muslim armies to give a jaw-breaking response to the fierce attack of the Jews. However, a ceasefire, forcing the Jews to sit on the negotiation table to come out with the final American solution for the issue of Palestine and imposing the two state solution, are all to turn the victory of Muslims into defeat. The Muslims have unified all around the world over Al-Aqsa Masjid and the Blessed Land of Palestine, calling for the mobilization of the Muslim armies to liberate Palestine. This has transformed into defeat with the call to impose the two-state solution, as if this solution is a victory and justice for the Ummah and for the people of Palestine.

In reality the two state solution is a victory to Jews and their monstrous entity. For those who do not know of the two state solution, it is simply a complete recognition of the occupation of Jews over more than 80% of the blessed land of Palestine, which is currently known as the Jewish state. This is in exchange for the declaration of a tiny, weak “Palestinian” state over less than 20% of the Blessed Land of Palestine, stripped of military capability and effective sovereignty, currently known as the Palestinian Authority. This is in addition to the internationalization of Al-Quds and its grave implications for Al-Aqsa Masjid. It is clear that the call for this solution by anyone is a deliberate call to empower the Jewish entity, at the expense of the Ummah. It certainly is not justice for the Ummah and the people of Palestine.

Those who call for the two state solution have placed the Shariah behind their backs. In addition, they violate the Umari Treaty which stipulated the non-permissibility of Jews to live in Baytul Muqaddas. They oppose the promise of Allah (swt) and the glad-tidings of the Messenger of Allah (saw) about fighting Jews, killing them and completely liberating of the Blessed Land of Palestine. The Messenger of Allah (saw) said,

“You (i.e. Muslims) will fight with the Jews until some of them will hide behind stones. The stones will (betray them) saying, ‘O `Abdullah (i.e. slave of Allah)! There is a Jew hiding behind me; so kill him.” [Bukhari].