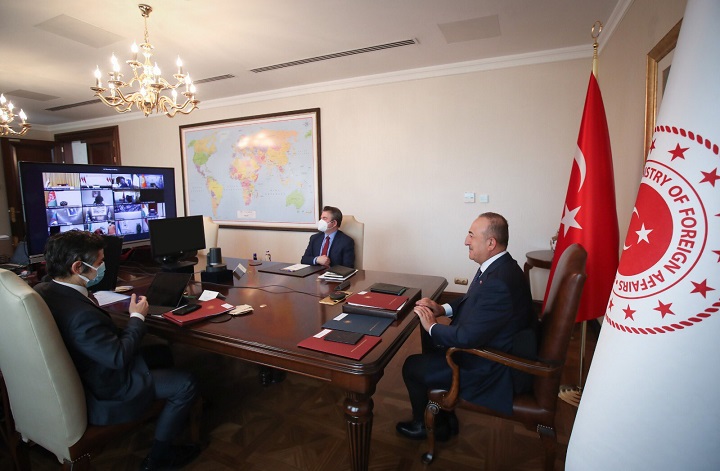 The Extraordinary Meeting of the Executive Committee of the Organization of Islamic Cooperation (OIC) was held. Turkish Foreign Minister Mevlut Cavusoglu stressed that ‘Israel’ was solely responsible for the atrocities in East Jerusalem, the West Bank and Gaza during an online open-door meeting. Cavusoglu, who stated that the restrictions to pray in Al-Aqsa Mosque and the fact that people are being displaced by force have led to the current situation, said “If this trend is not reversed, the two-state solution becomes physically impossible”.

Cavusoglu again said, “We need to do more, not just notices and statements. The international community is obliged to protect Palestinian civilians, and in this context, the OIC has a great responsibility.” (Yeni Safak 17.05.2021).

Comment:
We last have seen/we see more clearly in the Jerusalem attack of the Jewish entity that the rulers who twined themselves around the Ummah, are even afraid of talking about the solution, let alone solving the essential problems in the Islamic lands. Do not consider the fact that 57 countries held an extraordinary meeting under the name of OIC. The purpose of existence of these organizations is to reduce the rising tensions of Muslim peoples, and by talking a lot and taking no action, to degas peoples with simple messages of condemnation. And there is a nice expression in Turkish which summarizes this situation: “For the sake of appearances”. O rulers! The Ummah you rule is big and crowded and the geography you reign over is large and strategic, but unfortunately, you are as small and fearful as being unable to be worthy for this.

If this wasn’t the case, you would have erased the Jewish presence from the stage of history in a couple of hours with the power in your hands. If the countries which own millions of soldiers, thousands of fighter jets, rockets and war machines come together but still refer the solution to the UN, this is called shame and vileness.

Again, still shamelessly speaking of the two-state solution, which is an American project, is the peak of impudence. Recognizing the Jewish entity on occupied holy lands and persuading the Ummah for a Palestinian state on a small area is betrayal. Those who call the Jewish entity terrorist and do not abstain from any commercial relation, who share all kinds of intelligence, who serve this entity and establish its radar base on our lands, of course can neither implement nor talk about the real solution that will eliminate this entity.

Do you still refer the protection of Palestinian Muslims to the international community, while you have this much armies? Look, the countries which have supported the massacres committed by the Jewish presence and whom you call friends and allies, clearly choose up sides and give all kinds of support to these disbelievers while you “support” your brothers and sisters with the race of condemnation! In a land where the occupation began, first, the occupier is brought into line, and then diplomatic steps are taken if necessary. Faith as well as political mind dictates it. Decades of condemnations you have expressed, did not make this entity take a step back, not even a millimeter. On the contrary, it causes them to go too far, and you, in other words the rulers among us, are those who are responsible for it. There is no discussion, no treaty, no peace, no negotiations, no diplomacy with the Jewish presence. The only place to meet them is the battlefield, and this must continue until their complete elimination.

The Ummah has now seen the inability, cowardice and betrayal of the rulers in charge. From now on, the Muslim Ummah should be determined to get rid of its rulers as soon as possible. It should bring the rulers to account at squares, regarding the political, military and financial collaboration they have done with the Jewish entity which they call a terrorist state. It should turn its back on the leaders who defend the two-state solution, which is America’s plan. It should never trust the leaders who call for peace settlements. It should not listen to any statement of the leaders who do not mobilize the armies, which contain millions of soldiers, for Jerusalem. While our sacred values are being transgressed and while our brothers and sisters are being slaughtered, it should never accept the leadership of cowards who refer the solution to elsewhere.

This is now a fork in a road. The Ummah is forced to establish the Khilafah (Caliphate) system upon the method of the Prophethood that will radically solve their own problems, annihilate the occupations and ruin the order of the disbelievers. The Khalifahs and commanders who take action with this system, who are not afraid, who do not exchange the Ummah’s sacred values for simple benefits and who do not abstain from mobilizing the armies, are worthy of this Ummah. The solution for our occupied lands lies in the armies. The solution of the Khilafah system that will mobilize these armies is in the hands of the Ummah. It’s time to substitute the solution we have.