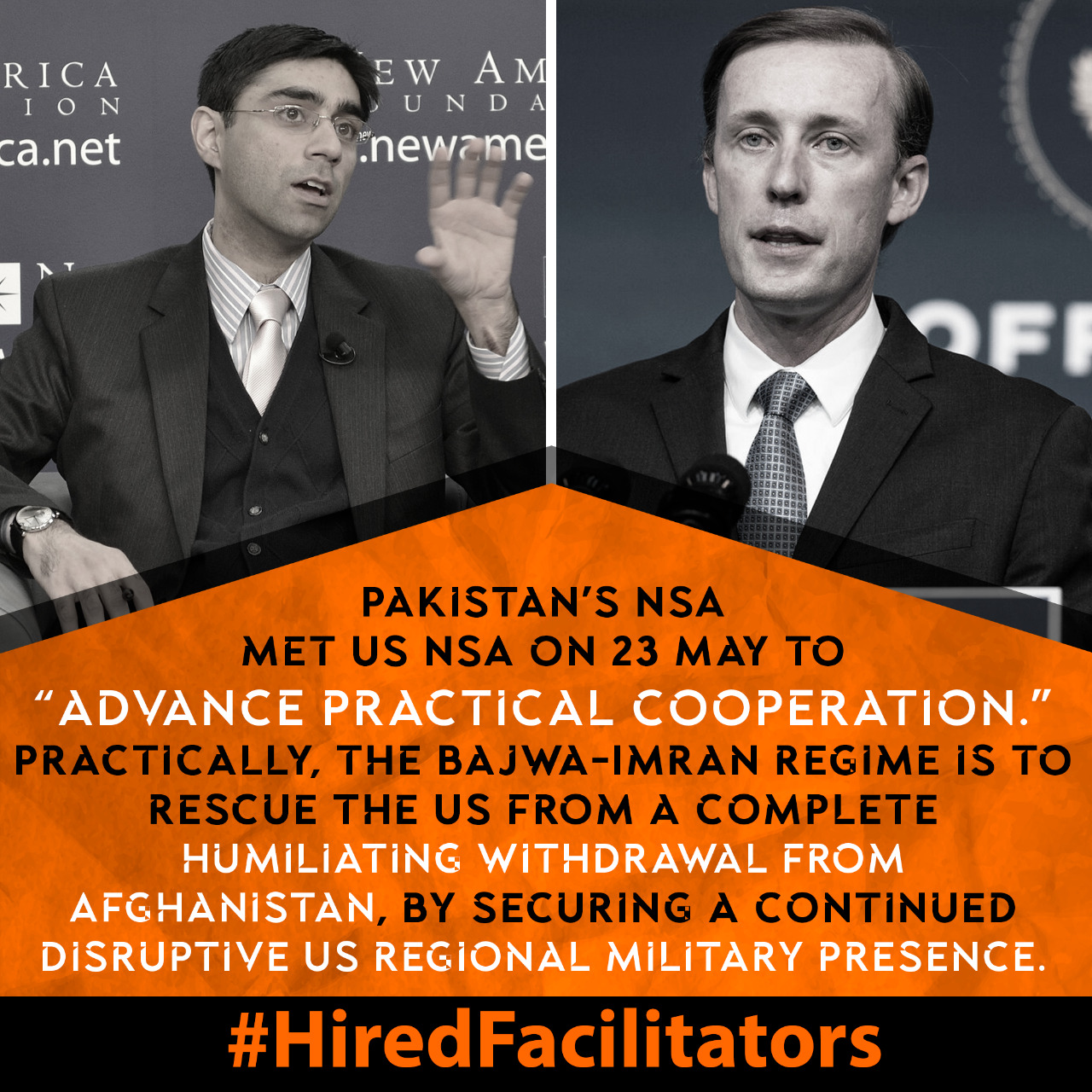 The Muslims of Pakistan and their armed forces reject the Bajwa-Imran regime’s hired facilitator role for the US military in Afghanistan, including its permission for the US to have over-flight and access to be able to support its crusader presence in Afghanistan. The treachery of the Bajwa-Imran regime contrasts with the principled stance of the tribal fighters of Afghanistan, who buried American military arrogance beneath mountains, through their spiritual strength, that compensated for their limited material strength. Unable to crush the Muslims’ resistance with its cowardly troops, the US now uses its agents in Pakistan’s military leadership to control Afghanistan. The US desperately needs support for military bases in the countries of the region, large spy-posts masquerading as embassies in Kabul and Islamabad and the trapping of the Afghan resistance in the maze of the secular democratic project through power-sharing deals. In this way, the implementation of complete Shariah law will remain merely a dream, whilst the US regional hegemony will continue. Thus, the United States depends on traitors within Pakistan’s political and military leadership to act as hired facilitators for the US colonialist Raj in the region. Pakistani Foreign Minister’s statement on “Broad-Based Strategic Partnership” and the meeting of Pakistan’s National Security Advisor with the US National Security Adviser are all links in the same chain of slavery to the US.

Islam’s regional vision is clear. The descendants of Abdali and Ghauri within the Pakistan Army must support the Afghan resistance against the fleeing Americans. They must eradicate the Durand Line drawn by the British to unify Pakistan, Afghanistan and Central Asia through the political vision of Khilafah (Caliphate). This practical vision will meet the food security needs of the entire region through Pakistan’s agricultural productive capacity, as well as the region’s energy needs through Central Asia’s Caspian Sea hydrocarbon reserves. Islam alone provides the geo-strategic and geo-economic vision that will bring the region real independence from the colonialist West. It is the Khilafah that will rapidly unify the rest of the Muslim countries, so the Khilafah is set upon being the world’s leading state as it was for centuries before.

O Armed Forces of Pakistan! It is abundantly clear that your current leadership has neglected the honor of the Messenger (saw), siding with the crusader kuffar. It did not lift a finger to halt the shameful Jewish assault on Al-Aqsa Majid and the Muslims of Palestine, whilst you were yearning for the liberation of the First Qibla, willing to sacrifice everything for its sake. It is the current leadership that has abandoned your brothers and sisters in Kashmir before the Hindu aggressor, whilst you are capable to defeat the cowardly Hindus, a glimpse of which you have shown on February 27, 2019. It is now this leadership that is facilitating the US to remain as a snake in the grass, even though you have the ability to ensure that it flees from the region. Uproot the leadership that stands with the enemies of Allah (swt), His Messenger (saw) and the Ummah. Grant Nussrah to Hizb ut Tahrir so that you resume the march of conquests that were broken by the destruction of the Ottoman Caliphate. Allah (swt) said,

“And when you have decided, then rely upon Allah. Indeed, Allah loves those who rely [upon Him]” [Surah Aali-Imran 3: 159].