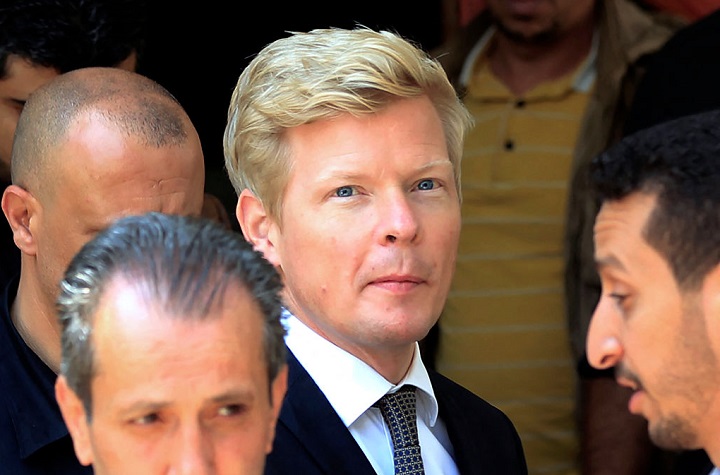 UN envoy Hans Grundberg left the capital, Sanaa, on Wednesday, April 13, after a three-day visit, during which he met a number of officials in Yemen, starting with Foreign Minister Hisham Sharaf and Mahdi al-Mashat, head of the Supreme Political Council and his deputy, President of the Popular Congress, Sadiq Abu Ras, and Prime Minister of the Yemeni National Salvation Government, Abdul Aziz bin Habtoor and Yahya Al-Ra’i, Speaker of Parliament since 2006, and Deputy Prime Minister for Defense and Security Affairs Jalal Al-Ruwaishan. He also met with the Governor of the Central Bank, Hashem Ismail. Upon his departure from Sanaa, Hans held a press conference in which he said, “All concerned parties welcome the opening of Sana’a International Airport, and we have not encountered any obstacles in this aspect.” And he added “We have seen the importance of the much-needed entry of fuel ships to the ports of Hodeidah, and preparations are being made to hold a meeting to agree on opening roads in Taiz and other provinces.”

The first visit of the UN Special Envoy to Sanaa came, after preparation and coordination had taken place with the meeting of Badr bin Hamad bin Hamoud Al-Busaidi, Foreign Affairs Minister of Oman, and the meeting with Mohammed Abdul Salam, the official spokesman of the Houthis, in the Omani capital, Muscat. No approval came to host him on Monday, April 11th, except after the Houthis raised their demands to achieve them, according to the Houthis’ spokeswoman Al Masirah TV, saying that the discussions will focus on establishing the humanitarian truce, opening Sanaa airport, and removing obstacles to the movement of ships in the port of Hodeidah. The Russian-Ukrainian war has also cast a shadow over the launch of the UN ceasefire truce in Yemen, in order to supply Western Europe with oil and gas as an alternative to Russian oil and gas, which led to the agreement of the two conflicting international parties in Yemen, Britain and America, and under this agreement the position of the Houthis changed by receiving the envoy Internationalist Grundberg.

The seriousness of the Houthis’ activation of the UN envoy’s truce comes from the statements and positions of their supporters in Iran and Lebanon, who showed their eagerness to make the UN truce a success. Iranian Foreign Ministry spokesman Saeed Khatibzadeh held a press conference on the same day of the UN envoy’s visit to Sana’a, in which he said: “There is no solution for Yemen but to lift the siege, establish a truce, and conduct a national dialogue with the participation of all groups.” Hassan Nasrallah followed him by saying, “The only solution in Yemen is negotiation and direct talk with Sana’a,” adding, “We are happy for the armistice in Yemen…” And Ali Khamenei’s speech on Tuesday, in which he said: “If this agreement is implemented in the true sense of the word, it can continue…” Emphasizing their standing with the actual couriers of the truce.

Finally, we say to the people of faith and wisdom: Isn’t it enough for you, people of Yemen, that the forces of international conflict control your lives and security, so they start war in their struggle against you whenever they want, and stop it whenever they want?! Isn’t it time for you to work with Hizb ut Tahrir to establish the second Khilafah Rashidah (rightly-guided Caliphate) state upon the method of the Prophethood, so that your political decision in your hands is based on the truth, and not on falsehood? The caravan is about to arrive, so join us in the path. Allah (swt) says:

“But no! By your Lord, they will never be ˹true˺ believers until they accept you ˹O Prophet˺ as the judge in their disputes, and find no resistance within themselves against your decision and submit wholeheartedly.” [TMQ An-Nisa: 65].