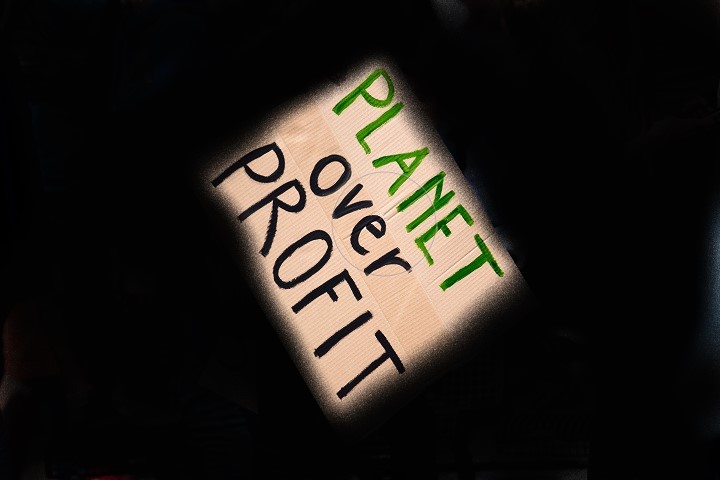 Capitalism has brought the planet to the brink of destruction, with the future of humanity itself in jeopardy, yet the capitalists themselves are unwilling to make serious changes to save us all. This is the sad reality of the ideology that puts profit and material desires above all else. In spite of the false rhetoric pumped out of the capitalist media machine, destructive climate change is just another negative consequence of the ideology that brought us two world wars, uses weapons of mass destruction to kill millions of people, installs odious dictatorial regimes to enslave and impoverish whole nations for its own nefarious gains, and uses colonialism to destroy millions more lives than even their wars can achieve. It is no surprise then that every competitive nature of the capitalist will exploit and ruin any attempt to save the planet.

The COP26 Conference in Glasgow this week will see many false promises and crocodile tears, but ultimately will fail to seriously solve the climate crisis, as the underlying causes will not be addressed. The absence of China and Russia and the hypocrisy of the capitalist West expose the fact that these conferences are more about geopolitical struggles than helping to solve a human problem.

The underlying problem is not the climate itself, nor even industry, but Capitalism and its insatiable desire for rampant exploitation of people and the environment with little regard for the long-term consequences. The never-ending drive for growth; the continuous pursuit of more and more profits; the power of special interests that pollute politics to allow excessive pollution of the environment; the encouragement of excessive debt driven by excessive consumerism; all of which leads to more industrial growth, more energy usage, more waste, more pollution and ultimately more CO2 emissions.

The countries that attend primarily look out for their own national interests. The US wants to curtail China’s growth – and this is one style of many. The UK is trying to position itself as a global leader in green technology, and wants to promote this agenda to promote business opportunities. Australia and India are seen as net polluters, so will seek to moderate targets and timescales for their own interests. Therefore, COP26 should be seen as a gathering of nations trying to shift the blame onto others and justify doing as little as possible to solving the problem while still promoting the image that they care about the planet and its people. Nothing could in fact be farther from the truth.

Policy proposals largely lie on the ‘supply side’ of the economy. Aside from dedicated climate change activists arguing that people should eat less meat, there is not a lot proposed that looks like a fundamental change in demand for material things – whether the latest gadgets, cheap air travel, or the latest fashions, and so on. The system that dominates the world continues to promote the idea that people should consume and business should produce – though suggesting that technology should produce things in a cleaner and more environmentally friendly way.

In addition, many realise that international efforts to reduce CO2 emissions will disproportionately harm emerging economies – whilst the developed world has enjoyed a head start in economic and industrial growth whilst being responsible for the emissions to date. As such, global conferences become a competition to define a framework that would benefit individual states and not humanity as a whole.

Islam on the other hand sets the desire for the pursuit of material things in a much greater context. Moreover, Islam has a distinct economic system which encourages trade, prohibits riba (usury) and does not have the in-built imperative for growth that comes with Capitalism.

It was narrated that the Messenger of Allah (saw) said: «لاَ ضَرَرَ وَلاَ ضِرَارَ» ‏“There should be neither harming nor reciprocating harm.”

Anything that causes harm to others, no matter how small, will be something that Allah (swt) will ask people to account for. Moreover, Islam discourages people from being wasteful.

Without the Khilafah (Caliphate) State which implements Islam there will never be any real deterrence to further capitalist competition, colonial exploitation and corruption, which are the main drivers of the climate and environmental crises.

Allah (swt) says: ‎﴿وَإِذَا تَوَلَّى سَعَى فِي الْأَرْضِ لِيُفْسِدَ فِيهَا وَيُهْلِكَ الْحَرْثَ وَالنَّسْلَ وَاللَّهُ لَا يُحِبُّ الْفَسَاد﴾ “And when he (man) turns away (from the Guidance brought to Muhammad), he strives throughout the land to cause corruption therein and destroy crops and animals. And Allah does not like corruption.” [Al-Baqarah 2:205].