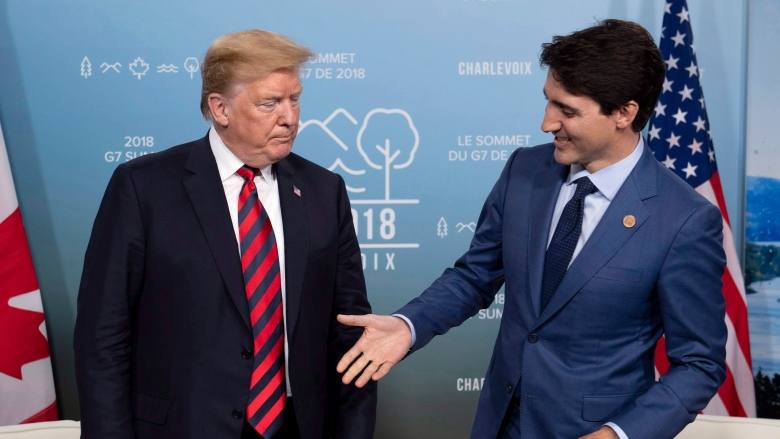 US President Donald Trump has called for the G-7 to readmit Russia, which had previously been a member; according to the Washington Post:

President Trump on Friday said Russia should be readmitted to the Group of Seven leading economies, breaking with other world leaders who have insisted that Moscow remain ostracized after its 2014 annexation of Crimea.

“Now, I love our country. I have been Russia’s worst nightmare. . . . But with that being said, Russia should be in this meeting,” Trump said Friday as he left the White House. “It may not be politically correct, but we have a world to run. . . . They should let Russia back in.”

Trump’s comments, made just hours before arriving in Canada for the annual G-7 summit, have the potential to further upend talks with other leaders who were already fuming about the U.S. leader’s protectionist trade policies.

Trump’s comments follow the other G-7 countries’ finance heads unanimous rebuke of US Treasury Secretary, Steve Mnuchin, at last week’s G-7 finance meeting, who had been isolated to the extent that the media began calling the meeting G-6 + 1.

But Trump’s call is not only revenge for how his treasury secretary was treated. America is executing major policy shifts at this time, withdrawing from the Iran nuclear deal and threatening a trade war against China. Western countries have been negatively affected by both of these initiatives and are trying to take advantage of the changing international situation to forge new partnerships, including  Russia. German Chancellor, Angela Merkel, met with Russian President, Vladimir Putin, last month to renew discussion of Russian gas supply through the Nord Stream 2 pipeline.

America has noticed these moves and Trump, bolstered by his new top foreign policy team of National Security Adviser John Bolton and Secretary of State Mike Pompeo, is taking steps to pre-empt Russia or China moving closer to his Western competitors.

The lesson for Muslims is that the Western disbelievers are far from unified, and will struggle against each other within their alliance just as the allies of the Quraish and Khaybar were in mutual conflict during their attempted invasion of Medina at the Battle of the Trench (Khandaq). We have nothing to fear from the West as long as we are sincere and unified upon our Deen, under capable, sincere, aware indigenous ideological leadership, a general leadership for all Muslims in the righteous Islamic Khilafah (Caliphate) State on the method of the Prophet ﷺ.

US desperate to secure its occupation in Afghanistan

With the continued inroads by the Afghan mujahideen into US occupied territory, the US is trying new initiatives to bring the Taliban leadership to the negotiating table. According to the New York Times:

President Ashraf Ghani of Afghanistan declared a brief, unilateral cease-fire with the Taliban on Thursday, a strategic gamble seen as a trust-building measure to encourage the militant group to conduct peace talks even as the war grows deadlier.

The cease-fire, which Mr. Ghani said would go into effect for eight days starting next week to coincide with one of the holiest periods on the Muslim calendar, comes months after his government presented an extensive peace offer to the Taliban.

The move is evidently just media talk to attempt to portray the US-backed regime as peace-loving, even though they are the ones providing political cover for the illegal foreign US occupation, as is clear from quotes in the same New York Times article from the regime’s own people on the ground:

Still, word seemed to be trickling down slowly based on interviews with 20 Afghan army and police commanders around the country. Only six were aware of the cease-fire when reached about an hour after the announcement, and they said they had heard it on television. The others said they were unaware.

“Cease-fire?” asked Sayed Jahangir Karamat, the deputy police chief of Badakhshan. “No, no, no, I haven’t heard — the information hasn’t come yet.”

Other commanders said they welcomed the cease-fire but were skeptical it would amount to much.

About 30,000 Afghan police officers have not been paid for months now, out of fear that the money was going to corrupt leaders.

The US occupation is unsustainable. The Afghan mujahideen have admirably refused compromise with the foreign occupying disbeliever. But what they really need is for the Muslim Ummah to re-establish their Khilafah, so that the ongoing jihad can receive the full backing of a state, and thus succeed in evicting the foreign disbeliever from Muslim land.

UN warns of catastrophic assault on Hodeidah in Yemen

A long-anticipated assault on Yemen’s port city of Hodeidah by the Saudi-led coalition could cost up to 250,000 lives, a senior United Nations humanitarian official said on Friday.

A coalition spokesman said on Tuesday that allied forces were 20 km (12 miles) from Houthi-held Hodeidah, but he did not specify whether there were plans for an assault to seize the port, the chief entry point for food and supplies needed to ease a famine and cholera epidemic.

Humanitarian agencies working in Yemen are deeply worried about by the likely impact of an assault. As many as 600,000 civilians currently live in and around Hodeidah, which lies on Yemen’s Red Sea coast, the United Nations said.

“A military attack or siege on Hodeidah will impact hundreds of thousands of innocent civilians,” the U.N. humanitarian coordinator in the country, Lise Grande, said in a statement.

“In a prolonged worst case, we fear that as many as 250,000 people may lose everything — even their lives.”

Coalition officials could not immediately be reached for further comment.

The so-called ‘Saudi-led coalition’ is actually being fully led and directed by the US. After the US’s military catastrophes in Afghanistan and Iraq, it is apparent that America has decided to never again directly engage its own troops in Muslim lands but instead work through the armies of Muslim regimes. The war in Yemen is a war for US objectives in order that the US can impose a government of its own choosing in Sana. And agent regimes, such as that of the Saudi ‘royal’ family, are fully willing to comply with US wishes. Muslims will not have peace and justice until we throw out the entire class of agent rulers and political agents that are the custodians of the colonial systems that have been implanted in our lands.

Jewish entity continues its brutality against the people of Palestine

The army said it was taking action to disperse some 10,000 Palestinians, some of whom threw rocks at the troops and burned tires, and prevent any breach of the fortified frontier fence.

“Israeli” forces have killed at last 120 Palestinians in protests along the border since a campaign was launched on March 30 to demand the right to return to ancestral lands lost to “Israel” in the 1948 war of its creation, hospital officials say.

The Jewish entity has no policy other than to continue the occupation of Palestine and the West fully backs and supports this policy. But they cannot stop the people of Palestine from rejecting their illegal occupation with their hearts and minds. We cry for the people of Palestine, as we do for Kashmir, Xinjiang, Chechnya and all of the occupied lands. But they need not our tears but our efforts in restoring our own political entity, free of agent rulers, so that we can retake all of these lands from the disbelievers. With the permission of Allah (swt), it will happen soon.

In what country are children given bulletproof shields to go to school? According to the Guardian:

Students at a school in Pennsylvania have received a bulletproof backplate for their backpacks as a gift for graduating eighth grade. The ballistic shields were donated by a local company and given to students at St Cornelius school in Chadds Ford, Pennsylvania, as a leaving present before high school.

The same article also cites an April poll that reported 57% of American teenagers and 63% of American parents saying that they are either somewhat or very worried about the possibility of a school shooting happening at their school.

It is in fact Western atheistic values, such as that of freedom, that have undermined societal harmony creating nations of egocentric sociopaths, unable to empathise with fellow human beings. The political ideal of Freedom is designed to sound good but what it means in practice is following base personal desires to the exclusion of higher values and responsibilities. The decadent secular West has nothing of civilisation to offer the rest of the world. Anything of value in it is the final remains of the medieval Christian civilisation that had been shaped by the global Islamic culture generated by the Khilafah State, the leading world superpower for over a millennium. The restoration of the righteous Islamic Khilafah (Caliphate) State on the method of Prophethood will not only result in peace and justice for Muslims but will elevate global culture as a whole restoring ethical, humanitarian and spiritual values to a world that has fallen to secular materialist Capitalism.