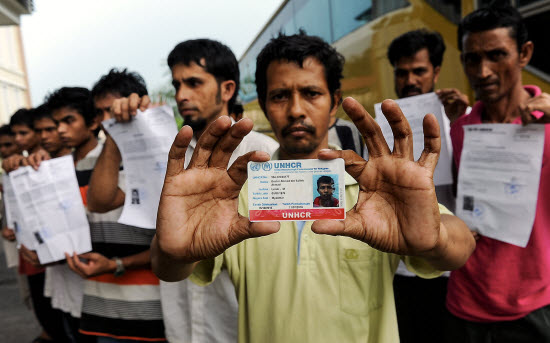 On the 6th of June, the United Nations Refugee Agency (UNHCR) and the United Nations Development Program (UNDP) signed a pact with the Myanmar government on the initial steps for the repatriation of the 700,000 Rohingya refugees who fled the brutal violence by the country’s military to Bangladesh. The agreement calls for a framework of cooperation that will lead to what the UN claims will be the “voluntary, safe, dignified and sustainable” return of Rohingya refugees, even though the deal does not even mention addressing Myanmar’s decades-long persecution and denial of citizenship for the Rohingya Muslims or holding to account those who executed the bloodbath against them. The UNHCR, stated that the conditions for voluntary return were not conducive yet and that the agreement would be, “the first and necessary step to support the government’s efforts to change that situation and is also intended to support recovery and resilience-based development for the benefit of all communities living in Rakhine State,” while Knut Ostby, U.N. Resident and Humanitarian Coordinator in Myanmar, claimed that it was an important step toward resolving the crisis.

It beggars belief that the UN would regard cooperating with the butchers of Burma to return the Rohingya into the hands of their killers and those who committed unthinkable crimes against them, and who continue to reject them as legitimate citizens of their state – would be a ‘safe, dignified and sustainable’ process! Which person of sane mind would even contemplate returning a people into the hands of those who brutally persecuted them for decades and slaughtered, raped, tortured and burnt down their homes and entire villages on repeated occasions over many years? Doctors without Borders estimates that at least 6,700 Rohingya were killed in just the first month of the wave of violence last August. The UN itself described the Myanmar security forces as executing a textbook example of ethnic cleansing upon the Rohingya Muslims, while the UN’s Special Rapporteur on Myanmar, Yeehang Lee, stated that the Rohingya crisis in Rakhine “bears the hallmarks of genocide”, following the release of images by Amnesty International which showed Rohingya villages being cleared to make way for military use.

And it’s a genocide that continues to today. In March of this year, the UN Assistant Secretary for Human Rights, Andrew Gilmour stated that Myanmar was continuing its ethnic cleansing of Rohingya, after reports emerged of fresh violence faced by refugees who had entered the Cox Bazar refugee camp in Bangladesh in recent days. In a statement he wrote, “It appears that widespread and systematic violence against the Rohingya persists” and also that it was “inconceivable” that any Rohingya would be able to return to Myanmar in the near future. He also stated that, “The nature of the violence has changed from the frenzied blood-letting and mass rape of last year to a lower intensity campaign of terror and forced starvation that seems to be designed to drive the remaining Rohingya from their homes and into Bangladesh.”  All this is of course alongside the fact that over 125,000 Rohingya who fled their homes in the 2012 spate of violence, continue to live in squalid camps for internally displaced people in Myanmar, from which they are prevented from leaving and where they are denied basic medical, educational and economic rights and any form of decent existence.

Clearly this move by the Myanmar regime is nothing but a political PR stunt aimed at trying to save face with the international community for its acts of brutality against its minority populations. The idea that it has suddenly had a change of heart with regards to its view and treatment of the Rohingya and wishes to do good by them is utterly absurd. Matthew Smith, the head of advocacy group Fortify Rights stated, “Discourse around repatriation now unfortunately appears to be attempt by authorities to distract from mass atrocities and crimes taken place.”

The so-called ‘solution’ offered by the UN to this crisis is to transfer the Rohingya Muslims from one state of inhumane existence in the refugee camps of Bangladesh to another, and to return those who escaped the killing fields of Myanmar to a life where they will face another round of persecution and slaughter in years to come. This highly irresponsible and incredulous move by this discredited organization is just another addition to its legacy of failure in providing any real solution to the plight of Muslims globally or protecting their lives – as we have seen in Bosnia, Syria, the Blessed Land (Palestine), Kashmir, Central Africa and across the world. Surely it should be further proof to us as Muslims that we should never place trust or hope in the international community to resolve our problems as an Ummah, protect our blood or secure for us dignified lives. Allah (swt) says,

“The likeness of those who take protectors other than Allah is as the likeness of a spider, who builds (for itself) a house, but verily, the frailest of houses is the spider’s house; if they but knew.” [29:41]

Misplacing our hopes in these failed institutions or Western governments to protect the lives of the believers simply prolongs the despair and suffering of Muslims across the world because it diverts attention from the true solution to all our problems as an Ummah and that which will put an end to the persecution and bloodbaths against our brothers and sisters globally. That true and only solution is the re-establishment of the Khilafah (Caliphate) based upon the method of the Prophethood – which Allah (swt) defines as the only shield and protector of the Ummah.