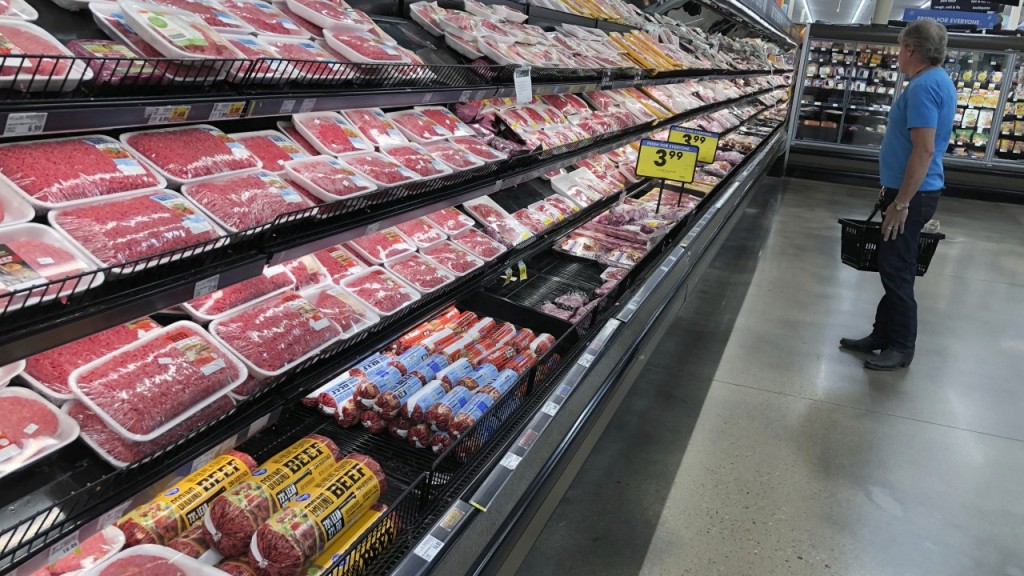 Food prices in the U.S. are higher than they have been in almost a half-century, thanks to disruptions in the supply chain, economic issues and spikes in viral infections. According to the Associated Press, prices spiked in April by 2.6 percent — a higher number than has been seen at any point in 46 years — and are likely to stay that way for the time being, according to the Labor Department. That included a 4.3 percent leap in prices for common items like eggs, meat, fish and poultry, which has leveled off a little in May as customer demand eased up. There was also a 2.9 percent jump for cereals and bakery products, which was the largest such increase the Labor Department has recorded. For items like carrots, potatoes and other produce, prices will be high for the foreseeable future due to disrupted transportation and health issues for the workers who pick them outside. Slaughterhouses are having a hard time keeping up with normal production levels, and due to the social distancing precautions necessary to keep workers healthy, meat prices will likely remain high. Slaughterhouse workers have been hit hard by the coronavirus, reporting lethal outbreaks for pork processing plant workers in particular, with beef and chicken processing plants also seeing heavy infection rates. All of this could mean dire straits for restaurant owners who rely on buying food to serve to customers, and who are themselves facing precarious conditions as the economy remains slow and workers are still either unemployed or fearful of going out too much. The prices were high at first because people were panic-buying, stocking up in preparation for staying at home more often. Another factor is that many people have gotten into the habit of cooking at home. Even as states reopen, the economy is moving sluggishly due to the lack of jobs and the lingering fear of catching the virus. [Source: PYMNTS.com]

Covid-19 is disrupting food chains globally. There are less people to pick, pack and transport the food. The supply disruption is increasing prices of food stuffs not only in the US but also globally.

In an extension of a bilateral dispute between Ethiopia and Egypt over the $4.8 billion Grand Ethiopian Renaissance Dam being built on the Nile River, Egyptian hackers launched a cyber attack on a number of Ethiopian government websites over the course of the past week. The two countries have been at loggerheads with each other for years over Ethiopia’s construction of the massive hydroelectric dam on the Nile—Egypt’s sole water source for irrigation farming and in general for its 100 million-strong population. But as the source of 85% of the Nile’s waters, Ethiopia maintains that the Chinese-backed dam is crucial for attaining developmental goals and combating poverty. Under construction since 2011, the Grand Ethiopian Renaissance Dam (GERD) continues to be a source of growing tension between the two states. The animosity has seen Ethiopia enter the crosshairs of Egyptian hackers numerous times in recent years. The hackers, who claimed to belong to the “Cyber_Horus Group,” left messages on the homepage of a Ethiopian regional police force training center, threatening war over the Nile and a “Pharaonic curse,” upon Ethiopians. Most of the hacked websites seen by Quartz Africa included the message from a Pharaonic painting: “If the river’s level drops, let all the Pharaoh’s soldiers hurry and return only after the liberation of the Nile, restricting its flow.” Similar messages with the group’s logo and Egyptian pharaoh motifs were left on about a dozen other government webpages. Messages celebrating Egyptian president Abdel Fattah Al-Sisi were also visible. There is no known link between the hackers and the Egyptian government. In a statement, Ethiopia’s Information Network Security Agency (INSA) claimed on Monday it was able to thwart a massive cyber attack by “cyber criminals” targeting Ethiopia’s political and economic infrastructure. Despite the taunting messages and images from the hackers being removed, most of the targeted websites remained offline as of 27 of June. Egypt has a history of threatening military action against states that contemplate building dams on the Nile River. In 1979, Egyptian president Anwar Sadat stated that “the only matter that could take Egypt to war again is water.” Observers believe a war over the Nile is unlikely, but worsening ties over Ethiopia’s intention to start storing the Nile’s water in the dam’s reservoir next month saw Egypt call for UN intervention. [Source: African Quartz].

Egyptian President is facing crisis on three fronts: Ethiopia, Libya and the occupied territories. So far his response has been timid, and he is struggling to articulate a strategy. Egypt has more than enough capability to solve all three issues, but this requires a leadership sincere to Islam.

Pakistan has moved two divisions of troops along the LoC in occupied Kashmir and Gilgit-Baltistan and Chinese officials are holding talks with cadres of terrorist outfit Al Badr to incite violence in J&K, as per intelligence inputs, indicating clearer signs of a China-Pak collaboration on the border. Pakistan has moved almost 20,000 additional soldiers to LoC to match Chinese deployments on the LAC in the east. The level of troops Pakistan has deployed is more than what it did after the Balakot air strikes. Pakistani radars are believed to be fully activated all along the region too. The simultaneous build up on the Pakistan and China borders and efforts to incite terrorism in Kashmir has brought the possibility of a two-front war and fighting terrorists in Kashmir, the worst case scenario strategic experts fear, closer to reality. Sources said there have been a series of meetings between Chinese and Pakistani officials in recent weeks, followed by amassing of troops in Gilgit-Baltistan, the area that adjoins Ladakh on the north. The buildup comes at a time when thousands of Chinese soldiers have been aggressively deployed along LAC in eastern Ladakh, apart from intrusions at several points that has led to a tense standoff. A build up in Gilgit-Baltistan would require additional responsibility for the Indian Army that has deployed a credible force in eastern Ladakh to counter China. After the bifurcation of J&K , Gilgit-Baltistan is part of the Union Territory of Ladakh, but occupied by Pakistan. The area adjoins Kargil-Drass where India fought a war to evacuate Pakistani intruders in 1999. According to intelligence reports, Chinese officials have undertaken meetings with cadres of the Al Badr, a Pakistan-based terror group that has a history of wreaking violence in Kashmir. “The assessment is that China may provide support to revive the organisation. This is among the signs we have received that indicate Pakistan and China are collaborating on the ground,” sources said. [Source: Economic Times]

As the standoff between India and China heats up, it appears that Pakistan soon after the Karachi Stock Exchange attack has decided to open up a third front. The move came hot on the heels of a 1.3bn loan from china to the state bank of Pakistan. Is Pakistan a hired gun for China?

The US would be able to buy Turkey’s Russian-made S-400 air defense system under legislation proposed in the US Senate last week. The proposal is one powerful lawmaker’s attempt to alleviate the impasse between Washington and Ankara over the F-35 Joint Strike Fighter. Senate Majority Whip John Thune, R-S.D., has proposed an amendment to the 2021 National Defense Authorization Act that would allow the purchase to be made using the US Army’s missile procurement account. The move comes a year after the US expelled NATO ally Turkey from the multinational F-35 program because it received the S-400 in a $2.5 billion deal. US President Donald Trump has held off imposing sanctions against Turkey for its purchase, but the sale remains a sticking point in the relationship. The US routinely buys foreign technology and could both exploit the S-400′s technology and test US tactics, said Jim Townsend, a former Pentagon official for European and NATO policy. If Turkey doesn’t go for the idea, he said, the two countries are still stuck.

“I think the US buying the S-400s from Turkey is a clever way of getting Erdogan out of the jam he put himself in,” Townsend said. “We just want to get the system out of Turkey … and if it enables the Turks to take part in the F-35 then all the better.” Erdogan has served the US well in both Syria, the wider Middle East and now Libya, but differences emerged amongst US policy makers regarding his strengthening position and as a result policy makers were able to impose sanctions on Turkey, but they have struggled to dent Erdogan’s opposition as Erdogan has allied in the US who see Erdogan as a useful took in achieving US strategic objectives.

As Pakistan Prime Minister Imran Khan struggles with the COVID-19 pandemic, which is the latest of the many crisis he’s now facing, Internal rifts within the Pakistan Tehreek-i-Insaf (PTI) government have surfaced. Prime Minister Imran Khan had to intervene and stop federal ministers from hurling allegations against one another during a cabinet meeting after one of the ministers raised the issue of federal Minister for Science and Technology Fawad Chaudhry’s interview to Voice of America (VOA) in which the latter said rifts among senior party leaders allowed non-elected members, who were unaware of PM’s vision, to join the cabinet. Mr Fawad in his interview with VOA had discussed internal rifts within the party ranks and said PTI stalwarts managed to remove one another, as Jehangir Tareen was behind the removal of Asad Umar from the cabinet while the latter managed ousting of Mr Tareen. He said non-elected persons had replaced elected representatives in close circle of the prime minister, who were unaware of the basic aims and objectives of the party. Just two years into Naya Pakistan, the Tsunami is taking place within Imran Khan’s government rather then in the country at large.

The prospects for the global economy are looking bleak with all major international financial institutions saying prospects for a quick global economic recovery are officially dead. All are now projecting huge losses and an uneven, prolonged recession, the world’s steepest recession in 80 years. The International Monetary Fund (IMF) now expects a cumulative $12.5 trillion economic loss from COVID-19 in 2020-2021, with a 4.9% fall in global production this year and a 5.4 percent recovery in 2021. But the IMF is one of the more optimistic institutes. The World Bank has predicted a 5.2% global economic contraction in 2020, with the Organization for Economic Cooperation and Development foreseeing an even larger 6% decline. Private sector forecasts, meanwhile, foresee global declines of as much as 12 percent this year in their worst-case scenarios. The Capitalist economic order will need to find a way to solve this problem, especially as many still have not recovered from the global economic crisis from a decade ago.