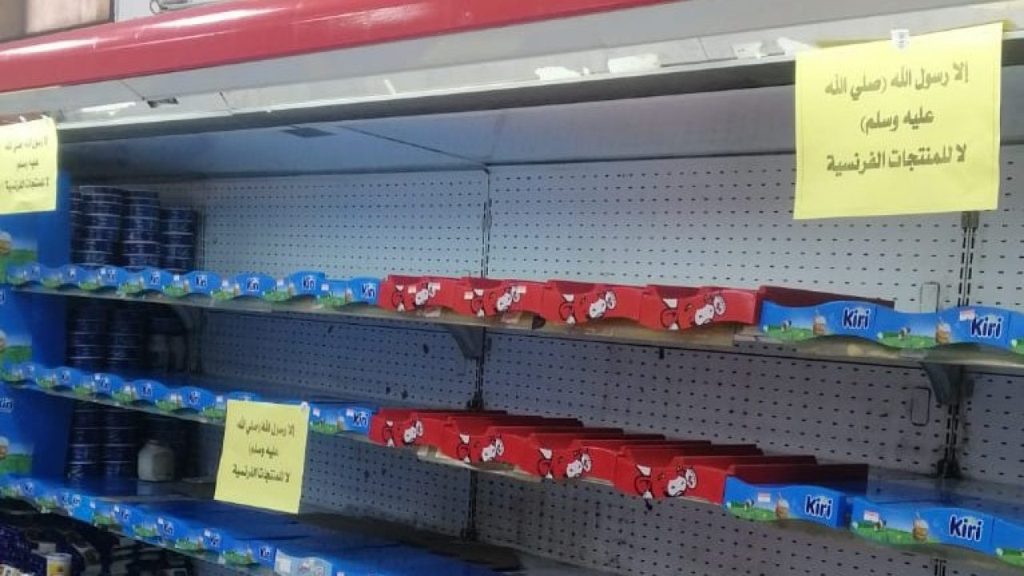 Hashtags on boycotting French products went viral, as social media users condemned the anti-Islam campaign in the European country as the French government has embraced increasingly hostile rhetoric against Muslims recently. Photos and video footage circulating on social media also show Kuwaiti supermarkets emptied shelves from made in France goods. The recent developments followed France’s ordering the temporary closure of a mosque outside of Paris, as part of a crackdown on Muslims following the killing of a teacher who showed his class caricatures of the Prophet Muhammad. French police have raided more than 50 mosques and associations since the killing. French President Emmanuel Macron refused to condemn satirical French magazine Charlie Hebdo’s decision to republish offensive cartoons of Prophet Muhammad, saying that it was not his place to pass judgment on the magazine’s decision. Macron backed the magazine and vowed measures against what he called “Islamic separatism.” Social media users, mostly on Twitter, are now sharing photos of the French products that Muslims should avoid purchasing. The boycott list includes luxury brands such as Cartier, Dior, Chanel, Nina Ricci, Givenchy and Lacoste along with food products or car manufacturers like Renault, or cigarette brand Gauloises. Al Jazeera Arabic also reported Friday that supermarkets in Kuwait started to remove French products from their shelves in line with the boycott campaign. An assailant on Oct. 16, was found to have decapitated a history teacher in France who had shown cartoons of the Prophet Muhammad in class, police said, adding that police had shot the suspected killer dead. A French anti-terrorism prosecutor has opened an investigation into the slaying for murder with a suspected terrorist motive, the prosecutor’s office said. The gruesome incident occurred in the town of Eragny, in the Val d’Oise region northwest of Paris. Charlie Hebdo republished caricatures of the Prophet Muhammad, which unleashed a wave of anger in the Muslim world, to mark the start of the trial of alleged accomplices in the deadly attack against it in 2015 in which 12 people were killed. Before the attack on Charlie Hebdo’s offices, militants online had warned the magazine would pay for publishing the cartoons. The attacks that began on Jan. 7, 2015, sparked a series of militant attacks on French soil, including “lone wolf” killings by people said to be inspired by the Daesh terrorist group that have since claimed more than 250 lives. The decision to republish the cartoons was seen as a renewed provocation by a magazine that has long courted with its satirical attacks on religion. Among the cartoons, most of which were first published by a Danish newspaper in 2005 and then by Charlie Hebdo a year later, is one of Prophet Muhammad wearing a bomb-shaped turban with a lit fuse protruding. The Organization of Islamic Cooperation (OIC) on Friday condemned the hanging of caricatures insulting the Prophet Muhammad on the front of some buildings in France and the government’s associating of Islam with terrorism. [Source: Daily Sabah]

Boycotting French goods will not hurt France. The very least some of the Gulf and Maghreb countries can do is cut oil and gas supplies. However, the long-term solution is for Muslims to establish the Khilafah Rashidah (rightly guided Caliphate), which will automatically take action against any state that chooses to defame the Messenger of Allah ﷺ.

The German police raided Mevlana Mosque in Berlin on Wednesday over what it said was a financial investigation. The mosque rejected the allegation. Turkey’s President Recep Tayyip Erdogan has denounced a German police raid earlier this week on a mosque in Berlin. “I strongly condemn the police raid on Mevlana Mosque in Berlin during the morning prayers,” Erdogan said on Twitter, adding the police action was “obviously nourished by racism and Islamophobia, totally flouting freedom of belief, and bringing Europe closer to the darkness of the Middle Ages.” “Europe, which for years has been referred to as the cradle of democracy, human rights, and freedoms, has today unfortunately turned into a structure that fights its differences,” Erdogan said. Erdogan stressed that Turkey would never allow any excuse for vulgar violations of any place of worship. Turkey will decisively continue its global fight against racism, xenophobia and Islamophobia, he added. Earlier Turkish foreign ministry “strongly condemned” the police raid, saying the incursion of some 150 personnel with boots during morning prayers was “inexplicable” and an “ugly act.” “Such an ugly act in the capital of a country that tries to lecture others on freedom of expression and belief is also thought-provoking,” the Turkish Foreign Ministry said in a statement on Friday. “This raid was not only against the community in the Mevlana mosque; it was also an act against all the Muslim community, and it is inexplicable,” it said. [Source: TRT]

Erdogan has been eager to mobilize his army and intervene in Syria, Libya and elsewhere in the region. But he has use the threat of force to annul the Jewish entity’s usurpation of Palestine, Macron’s support for the defamation of the Messenger of Allah (swt) and now Germany’s open violation of the sanctity of mosques. Erdogan’s desire to be Sultan would be better served if he genuinely acted in the interests of the Ummah rather than pleasing Western powers.

Indian journalist Rana Ayyub on Saturday slammed a person for a Facebook post where he had notified the availability on lease of an apartment in Mumbai. The post had made clear that Muslims and pets aren’t allowed. Ayyub, who is an opinion columnist for Washington Post, in a tweet, said: “Muslims and Pets not allowed. This is 20th century India. This is one of the most posh addresses in Mumbai, Bandra.” Violence and hate speech against Muslims is becoming increasingly common in India with several people belonging to the faith even tortured and killed. Prime Minister Imran Khan, addressing the United Nations General Assembly last month had said the RSS has been directing its hate at the Muslims, just like the Nazis’ were with Jews. “While the Nazis’ hate was directed at the Jews, the RSS directs it at the Muslims, and to a lesser extent, the Christians,” he said, adding that the extremist ideologists believe that India is exclusively for Hindus and others are not equal citizens. “The secularism of Gandhi and Nehru has been replaced by the dream of creating a Hindu Rashtra, by subjugating, even cleansing India’s 200 million Muslims and other minorities,” he said. The outbreak of coronavirus in India had also triggered a series of attacks against Muslims across the country, with the health ministry of the Hindu nationalist government of Prime Minister Narendra Modi claiming that Muslims are spreading the virus. “Young Muslim men who were passing out food to the poor were assaulted with cricket bats,” The New York Times had said in a New Delhi-datelined report. “Other Muslims have been beaten up, nearly lynched, run out of their neighborhoods or attacked in mosques, branded as virus spreaders,” the paper said, highlighting that Hindu extremists were scapegoating the country’s entire Muslim population for deliberately spreading the virus through “corona jihad”. Sikh temples in Punjab State, it added, were urging people not to purchase milk from Muslim dairy farmers because it is allegedly infected with the coronavirus. [Source: Geo TV]

Modi’s hate fueled Hindu ideology is emboldening ordinary Hindus to forsake secularism and adopt bigotry towards Muslims in all facets of life. Under the Islamic state of the Khilafah, the Hindu majority were never treated in such a despicable manner.