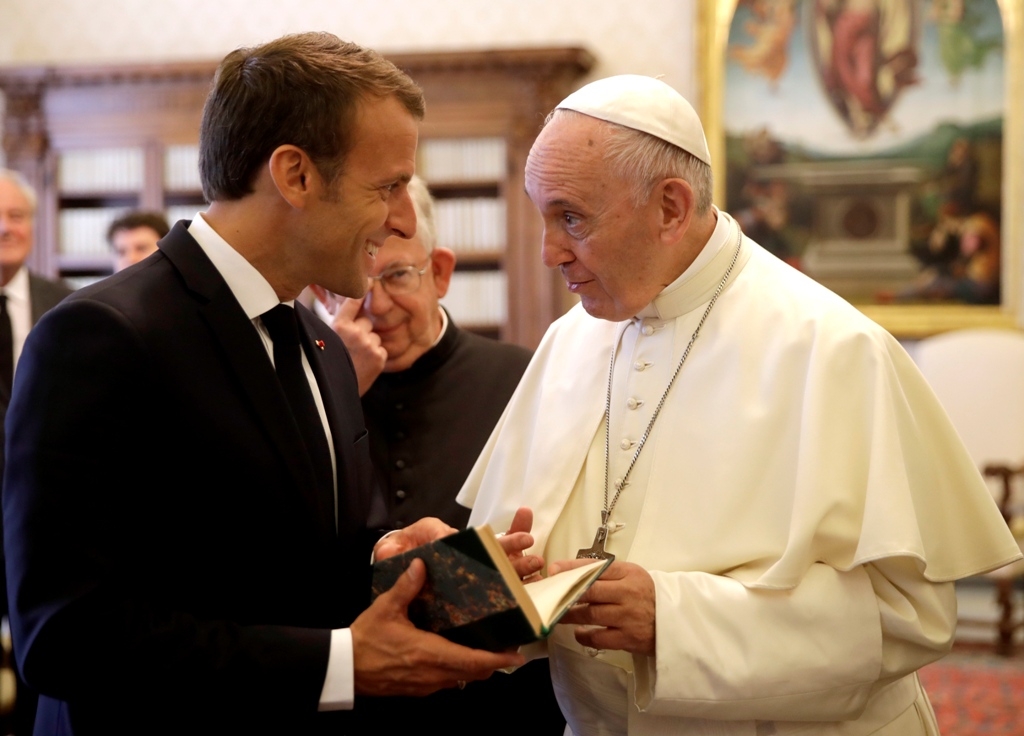 Islam in ‘Crisis All Over the World’, France’s Macron says

French President Emmanuel Macron Friday called Islam “a religion that is in crisis all over the world,” in a speech addressing what he calls “separatism” in France’s Islamic community. In remarks delivered in the western Paris suburb of Les Mureaux, Macron said Islam is a religion in deep crisis worldwide, even in countries where it is the majority religion, because of “tensions between fundamentalism and political projects … that lead to very strong radicalization.” The French president said in France there is a “parallel society” of radical Muslims thriving outside the values of the nation, a “separatism” as he describes it, that thrives in some neighborhoods around the country, where Muslims with a radical vision of their religion take control of the local population to inculcate their beliefs. But Macron said everyone can share in the blame for this so-called separatism. “We ourselves have built our own separatism, that of our neighborhoods. This is the ghettoization that our republic, initially with the best intentions in the world, allowed to take place,” said the French leader Friday. He noted France’s concentration of populations into districts according to their origins, which has also concentrated educational and economic difficulties as well. Macron said where French secular society failed Islamic youth, radicals stepped in. The French president said the government will offer legislation in December to “reinforce secularism and consolidate republican principles.” He called secularism “the cement of a united France,” and added: “Let us not fall into the trap laid by… extremists, who aim to stigmatize all Muslims.” During his speech, Macron repeatedly stressed the importance of schools in instilling secular values in young people and said that the government would require private schools to agree to teach them. Beginning next year, with few exceptions, the 50,000 French children who are currently educated at home would be required to attend school with fellow students, he said. [Source: Voice of America]

Actually, it is secularism, which is responsible for French ghettos and Muslim separatism. Secularism is unable to safeguard the religious beliefs and values of not only Muslims but also people of other faiths. Only the Khilafah Rashidah (rightly guided Caliphate) upon the method of the Prophethood guarantee that people can live and practice according to their Deen in the Islamic state.

US expert Anthony Fauci has described the Rose Garden event as a “superspreader” which led to the White House outbreak. He also sought to temper presidential praise of an experimental drug. DW has the latest on COVID-19. The US government’s top infectious disease expert Anthony Fauci has said the event held at the White House Rose Garden on September 26 was a “superspreader” event that led to multiple people, including President Donald Trump, being infected. “I think the data speak for themselves. We had a superspreader event in the White House,” Fauci told CBS News Radio. “And it was in a situation where people were crowded together and were not wearing masks,” he added. Asked about the president’s praise for an experimental COVID-19 treatment he received as “a cure,” Fauci said calling it such would be misleading as it still hasn’t been proven. “We don’t have any indication – I think you really have to depend on what you mean by a cure because that’s the word that leads to a lot of confusion,” he said. US President Donald Trump announced that he will give a public speech at the White House on Saturday for the first time since testing positive for the coronavirus. The crowd will be on the South Lawn, while Trump will speak from the balcony. All attendees will be required to wear masks and their temperatures will be checked, according to a senior administration official.Trump will also head back to the campaign trail next week. He announced that he will hold a rally in Florida on Monday, despite widespread concerns that he may have not fully recovered from his coronavirus infection and therefore still be contagious. Trump’s Democratic challenger Joe Biden criticized the president’s behavior as “reckless.” “His reckless personal conduct since his diagnosis, the destabilizing effect it’s having on our government, is unconscionable,” he said.The US president also said he has stopped taking medication to combat COVID-19. “Right now, I’m medication free. I’m not taking any medications as of, you know, probably eight hours ago,” Trump told Fox News on Friday night. [Source: Deutsche Welle]

There is very little doubt that Trump’s recklessness over Covid-19 is unforgivable and emphasizes just how his administration has put politics ahead of health and safety. However, Fauci’s performance is equally damning, as he has changed his stance several times on social distancing, masks and vaccines. At the heart of Fauci’s inconsistency is science, which by definition is based on conjecturer and will always produce evolving facts. Hence, neither America’s democracy nor its scientific institutions are capable of finding a long-lasting solution to Covid-19.

Pakistan banned TikTok on Friday for carrying what it called indecent content, making it the latest country to restrict the wildly popular Chinese video-sharing app, which is also battling being blocked in the U.S. India banned the app in June along with dozens of others from China, citing cyber security concerns. It is facing a ban in the U.S. in November if the company doesn’t seal a deal with Oracle intended to safeguard the data of U.S. users. The fact that it is being shut down in Pakistan—one of Beijing’s closest allies—is particularly bad news for the company. Some investors in TikTok’s parent company, ByteDance, are concerned that while the app could weather losing access to individual markets, the loss of multiple countries could be devastating. Pakistan regards China as its most reliable ally and has considered it a strategic partner for decades. Pakistan is a showcase for Beijing’s global program to build infrastructure overseas.Pakistan’s telecommunications regulator said that some content carried on TikTok broke the law in Pakistan for being immoral and indecent. Repeated requests to the app to filter out the content hadn’t worked, the regulator said. “TikTok is an inclusive platform built upon the foundation of creative expression, and we are hopeful to reach a conclusion that helps us serve the country’s vibrant and creative online community,” said a TikTok spokesperson. TikTok is popular in Pakistan, turning ordinary people—often from remote corners of the country—into celebrities overnight, with wacky videos. It also carried criticism of the government on issues that concern poorer people the most, such as rising prices of food. “TikTok was the only way the poor had a voice in the social media revolution that until this platform had largely passed them by,” said Habib Khan, a director of a Karachi-based digital marketing company called Penumbra. TikTok also has much Islamic content, such as users singing traditional religious songs or Muslims challenging Hollywood stereotypes of the community in the U.S. A Pakistani official said that the authorities were primarily concerned about nudity on the app. He said that Pakistan had asked for TikTok to put a filter in place that automatically blocked the content it deemed indecent but the posting of the videos was much faster than the taking down. He said that they weren’t concerned about political content on the platform. “TikTok has been informed that the Authority is open for engagement and will review its decision subject to a satisfactory mechanism by TikTok to moderate unlawful content,” the Pakistan Telecommunication Authority, which regulates the sector, said in a statement. TikTok has also run into trouble in the past with Indonesia, Bangladesh and India over content described by those governments as pornographic.In Egypt, the reaction to TikTok has been more draconian, with arrests of women posting videos of themselves singing and dancing on the app—with clothes on. Prime Minister Imran Khan has repeatedly said that he wants to promote a “digital Pakistan” but critics say the authorities are increasingly restricting the internet instead. The government is currently working on new rules that would force social media companies to remove content it deems objectionable. [Source: Wall Street Journal]

The fact that so many digital platforms other than Tik Tok carry immoral content and have not been shut down raises suspicion that Khan’s government has succumbed to US pressure. The prohibition of Tik Tok also raises questions about Pakistan’s strategic relationship with China, and underscores that Islamabad is firmly a satellite of America.