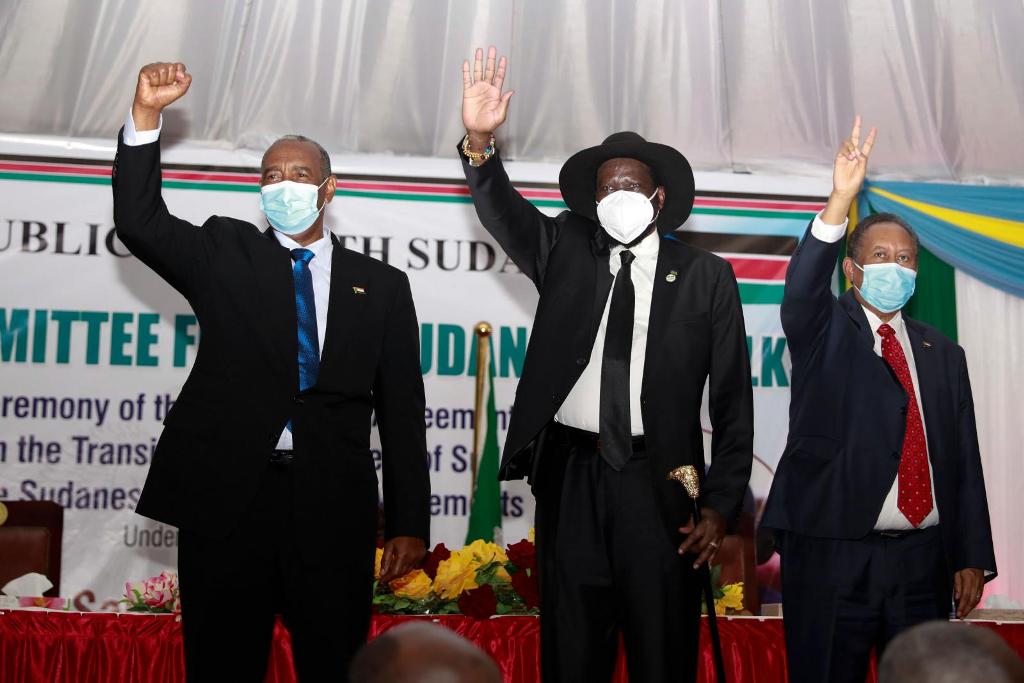 On Saturday, 3/10/2020, the Transitional Government, in Juba, capital of South Sudan state, celebrated the signing of the so-called peace agreement between the Transitional Government and the armed movements. “The government leaders have pledged to fully implement the peace agreement signed with the Revolutionary Front.” (Sudan Tribune, 3/10/2020). This repeated scene of the signatories celebrating, waving the agreement files, is like what happened in Machakos, Naivasha, Abuja, Doha, and others. These agreements brought nothing to the people of the country except hardship in living and misery, because they are the dictates of the colonizer, to preserve its interests and implement its agenda, and then the agents fight over the spoils they call sharing power and wealth.

The clauses of the recent peace agreement amount to the crime of high treason, because it threatens the security and peace of the people of Sudan by tearing their country apart, plundering their wealth, and excluding the Shariah of Allah, the Lord of the worlds that they follow.

Al-Hilu and Hamdok agreed on 3/9/2020 to separate religion from politics and governance. The Declaration of Principles agreement signed in Addis Ababa and in the presence of the Director of the World Food Program, David Beasley, stated that “a democratic state must be established in Sudan, and for Sudan to become a democratic country, it is necessary that the constitution is based on the principle of (separating religion from the state).” The head of the Revolutionary Front, Al-Hadi Idris Yahya, said on the day of the signing the initial (peace deal) 31/8/2020: “The peace agreement is distinctive, as it addresses the roots of crises and provides effective solutions and fair standards for sharing power and wealth.” (Sudan Tribune)

These agreements clearly included the idea of quotas in the government, giving the armed movements’ members: 3 seats in the Sovereignty Council, 4 ministerial seats in the Council of Minister, and granting them 75 seats in Parliament, as the agreement stipulated (the implementation) democracy and federalism. The Eastern Path also stipulated that 30% of the state positions in the eastern region of the Beja Conference and the United Popular Front, which focus regionalization, the cause of the disease and the cause of the affliction, what set the stage for calling for the so-called self-determination, as stated in the Peace, Development and Justice Conference organized by the Supreme Council of Beja Managers and Independent Mayors, in the Sankat region, on Tuesday, 29/9/2020:

“Pursuing the legal right stipulated in the United Nations Charter on the right of peoples to self-determination, we, the Beja people, accepted and agreed to use the right to self-determination” (Sudan Tribune, 1/10/2020). In the Nuba Mountains and Blue Nile, an agreement between Malik Agar and Arman was made on giving self-autonomy for the two regions and for each to have a constitution, which is a clear prelude to the separation of these areas, and this is a new betrayal, like what was concluded in the Naivasha Agreement, which laid the foundation for the cessation of southern.

We in Hizb ut Tahrir/ Wilayah of Sudan warn the people of Sudan against these sinister agreements sponsored by the kaffir colonialist, which tears the country apart, in which ruling is shared as spoils, and the agents of the colonialists control it. The Naivasha agreement is a close example. Events and facts have proven that these national state systems, whether they are military or civilian, are the colonialist’s creation. There is no solution to the problems of the people of Sudan, but rather for the whole world except by establishing the system of Islam and implementing its Shariah law, through its Khilafah Rashida (rightly guided Caliphate) state on the method of prophethood, for it is the only one that restores security and justice and achieves tranquility and peace, and anything else causes distress and misery. Allah (swt) says:

“… then whoever follows My guidance will neither go astray [in the world] nor suffer [in the Hereafter] * And whoever turns away from My remembrance – indeed, he will have a depressed life, and We will gather him on the Day of Resurrection blind.” [Ta-Ha: 123-124]