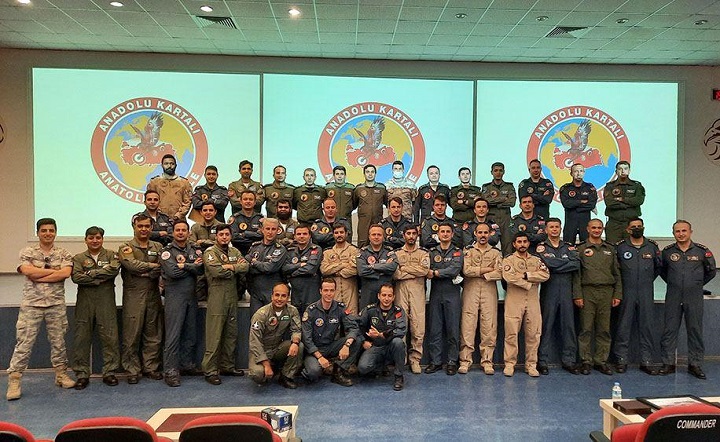 Headlines:
Turkey Inaugurates Bloc from Balkans to Chinese Border
Japan to Defending Taiwan with the US
Syria: US Stealing Grain and Oil & Building Up Military Bases

Turkey recently hosted and led several military exercises with the word Anatolian (Anadolu) as part of their code names, two in particular, occurring simultaneously, warrant close examination. They are Anatolian 21 and Anatolian Eagle 2021: the first a special operations exercise and the second an air combat one.

Anatolian 21 is led by Turkish special forces, and what is most significant about it is the list of participants. Nations fully participating are Albania, Azerbaijan, Qatar, Kazakhstan, Pakistan, Turkey and Uzbekistan and as observers Kosovo and Mongolia. The nine countries define a geographical arc stretching over 4,000 miles, from the Adriatic Sea to the Chinese border. All the nine are NATO members and partners if Kosovo, the world’s first NATO state as Serbia’s prime minister deemed it in 2008, is included. Four are Turkic states. Albania and Kosovo were former Ottoman territories. Turkey has announced that the first-ever sale of its Vuran (Striker) armored combat vehicle is to Kosovo. All except Mongolia are majority Muslim. Turkey has recently been identified by a Mongolian official as its strategic partner under the framework of NATO. Turkey is NATO’s second-largest member state; Pakistan is its largest partner and the only one with nuclear weapons. Four of the nation’s participating in Anatolian 21 are also took part in Anatolian Eagle 2021: Turkey, Pakistan, Qatar and Azerbaijan. This was an exercising involving the air forces of multiple nations.

Turkey and Pakistan have held their own exercises with multiple nations, but politically both nations secure US interests, despite doing all the heavy lifting If they ceased to be tools for US foreign policy goals and truly unite they could expel the US from the Muslim world.

Japan to Defending Taiwan with the US

With tensions between the US and China rising, Japanese Deputy Prime Minister Taro Aso said that if a Chinese invasion of Taiwan threatens the “survival” of Japan, Tokyo and Washington must intervene. Japan’s post-World War II constitution only allows the country to deploy its armed forces if it comes under attack. In 2015, then-Prime Minister Shinzo Abe amended Tokyo’s defence policy by adding a clause that allows Japan to defend its allies like the US in cases where Japan faces a “threat to its survival.” “If a major incident happened [in Taiwan], it would not be strange at all if it touches on a situation threatening survival,” Aso said. “If that is the case, Japan and the US must defend Taiwan together.” Japan has no formal relations with Taiwan but has been following Washington’s lead and is boosting ties with Taipei. In April, Japanese Prime Minister Yoshihide Suga and President Biden released a joint statement that called for “peace and stability across the Taiwan Strait.” While the Suga-Biden statement might not seem like much, it was the first time the leaders of the US and Japan mentioned Taiwan in a joint statement since 1969. China slammed the statement and accused the US and Japan of “ganging up to form cliques and fanning bloc confrontation.” The Biden administration views alliance building in Asia as vital to its anti-China policies, and Japan plays a role in this strategy.

Syria: US Stealing Grain and Oil & Building Up Military Bases

In the latest of what have become regular reports on the subject, the Syrian Arab News Agency provided a detailed account of the American presence in Syria. It was reported that 45 US vehicles departed the town of Rmelan in the northeast province of Hasaka (the al-Hasakah Governorate) loaded with stolen wheat and oil, “in parallel with bringing equipment and logistical material to support their bases in the province.” The amount of vehicles bringing arms and supplies to the military base was reported to be 27. The same source notes that on July 3 the US military moved 37 tankers full of stolen Syrian oil and several more trucks and refrigerator vehicles from the al-Jazeera region through the unauthorized al-Walid crossing used by the US to smuggle grain and oil into Iraq. Such convoys are ordinarily escorted by armored vehicles.

Despite US strategic goals in the region, President Trump made it very clear that the US wanted to see a return on having troops there and argues was America’s right to take the countries oil and resources.