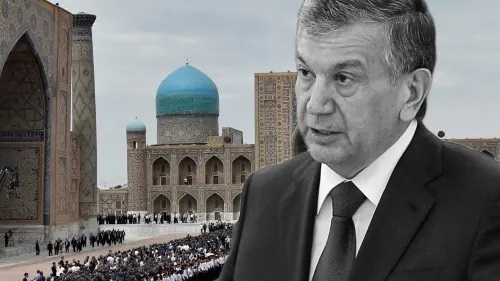 On January 7, the broadcasting company of Uzbek television on the channel “Uzbekistan” aired a program entitled “Islam – the essence and explanations,” which was devoted to refuting the video lecture of brother Mahmoud Abdulmumin, in which he explained the issue of jihad.

The host of the program, Ilhom Marupov, the head of religious affairs, and the rector of the higher madrasah Mir Arab – Yuldoshhodjaev Kh., denied the claims of brother Mahmoud Abdulmumin that the Shariah meaning of jihad is a battle in the path of Allah or the provision of assistance with property, words, and any action directly war-related.

The rector of the madrasah Mir Arab Yuldoshhodjaev Kh. stated that the term jihad should be considered in the lexical meaning of this word, that is, making a great effort in doing something, such as studying, helping parents, etc., calling these actions jihad. Also Yuldoshkhodjaev Kh. stated that today jihad is limited only to the protection of the state and is in no way connected with military actions against disbelievers and the spread of Islam throughout the world.

Comment:
The active work of the Shabab of Hizb ut Tahrir to restore the Islamic way of life, not only on the ground, but also on the Internet, haunts the criminal regime of Sh. Mirziyayev. Recently, the tyrant’s regime has stepped up an ideological attack against Islam and Muslims. In this struggle, the criminal regime uses corrupt imams to distort Islam and alienate Muslims from their religion.

The corrupt imams, in service to their masters, without fear of Allah, call the Shabab of Hizb traitors of their homeland, the ignorant not knowing Islam, organizers of religious movements, extremists and terrorists. But all their efforts are in vain, since the lie they are trying to pass off as truth does not stand up to criticism.

You do not need to be a scientist in order to read the history of the arrival of Islam in Central Asia. Indeed, not a single historian will refute the truth that Islam came to the territory of modern Central Asia during the Umayyads by the method of jihad. One of the commanders of the armies was Kuteiba ibn Muslim. The Sahabahs fought not only defending Medina on the day of the Battle of the Moat, but also conquered Sham, Iraq, North Africa, etc., using the method of jihad. The Prophet Muhammad (saw) himself, according to different opinions, participated in more than 20 battles. From the time of the establishment of the Islamic State in the radiant Medina, and until the collapse of the Khilafah (Caliphate) in 1924 on the territory of modern Turkey, jihad was and remains a method of spreading Islam.

The criminal regime, represented by Sh. Mirziyayev and his corrupt imams, present themselves as connoisseurs and defenders of Islam, interpret the Shariah law as beneficial to them. At the same time, this Tagut regime does not implement any Shariah law in life. We see how these defenders of the “true Islam” prohibit religion from interfering in life, and the country’s constitution states that the Republic of Uzbekistan is a secular state and religion is separated from life, but Allah says in the Qu’ran:

“And those who do not judge by what Allah has revealed are the disbelievers” [5:44].

We will not find a single Shariah law in the social system, economic system, education system or political system of the Republic of Uzbekistan. Why? So maybe because this is the Tagut system, and Sh. Mirziyayev imagines himself a new Pharaoh who has declared war against Islam and Muslims!

Not one of these grief corrupt imams, posing as representatives of Islam, will not tell this tyrant that he must rule according to the laws of Allah. None of these corrupt imams will tell a tyrant that it is a great crime to torture and kill Muslims in order to turn them away from their religion. And there are many such examples.

Muslims! Allah is enough for us as the patron! Allah will help us get rid of this criminal regime and its corrupt imams! Join the work of Hizb ut Tahrir on the revival of the Second Righteous State of the Khilafah (Caliphate) according to the method of Prophethood! Allah Almighty said in His Noble Book: