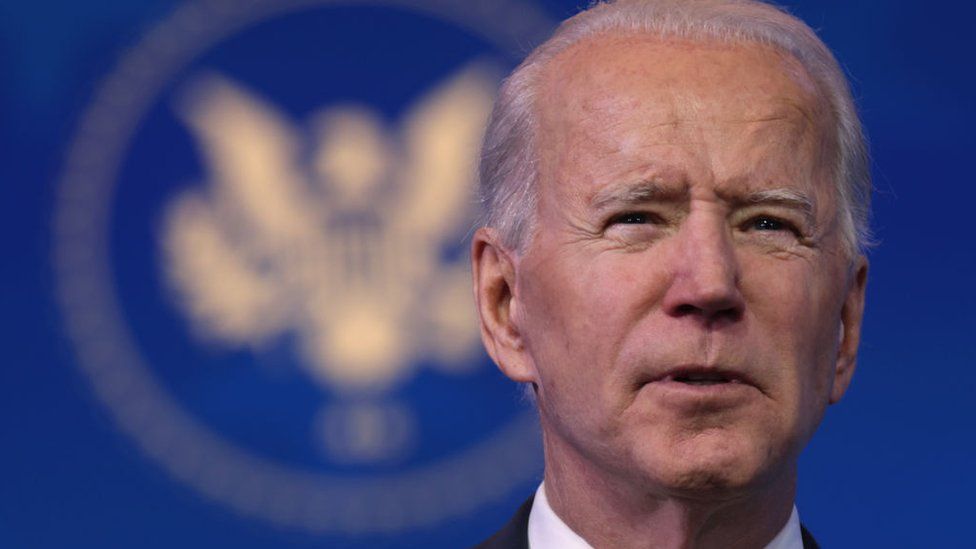 Biden becomes President of the World

As highlighted in last week’s review, the US will continue to face extreme internal polarisation even after Trump has left office as a result of deep-rooted ideological issues resulting from the Capitalist compromise between Christianity and materialism. But commentators are mistaken to think from this that President Joe Biden will be too preoccupied with domestic issues to give attention to foreign policy. America is the global superpower; its government dominates all aspects of world affairs, and its president is elected not to rule over the United States only, as the American public may imagine, but to preside over the entire world, exploiting all of humanity for the benefit of the American elite. None of the other great powers currently in existence have the ability to displace America from its position as first state.

Biden himself has decades of experience in foreign policy because of his long service in the Senate, much of it on the powerful Senate Foreign Relations Committee, including as Chairman of the committee. Then he was a particularly powerful vice president because of the youth and inexperience of President Obama; he was careful to mask his true influence from the general public but there was hardly any public speech or statement made by Obama in which Biden was also not present. This week the Economist said about Biden that “he has had a role in, or a say on, most foreign policy since the cold war”.

Moreover, although policies do change from administration to administration, the framework of this policy is tightly controlled by the American establishment, in the form of plans set by them. It is left to the president only to determine the manner in which these plans are executed. The establishment are generally in agreement on these plans because they are built on a fixed thought and method determined by the Capitalist ideology, and accord with styles and means that remain in use for years or decades because of the dictates of contemporary realities. Hence, Biden will very much continue Trump’s antagonism towards China, his attempts to stabilise US puppet governments in Iraq and Afghanistan, his efforts to push the Europeans out of Libya and Yemen, while managing the aftermath of the crushing of the revolution in Syria, and a range of other ongoing initiatives. The executive orders that Biden signed on day one either concern superficial, symbolic matters such as stopping the building of the border wall, or changes because of personal or partisan approach, such as re-joining the Paris climate agreement and the World Health Organisation. America’s objectives in these actions will remain unchanged.

The Iranian foreign minister Javad Zarif has called on the new administration of Joe Biden to lift sanctions on Iran and return to the terms of the nuclear deal signed under Obama. It is expected that Biden will indeed return to some sort of arrangement with Iran. Democratic presidents tend to be more multilateralist in their approach to international problems whereas Republican presidents tend to be more unilateralist. However, these are differences in approach only, as the objectives that they both pursue are the same. Iran is a committed American agent in its foreign policy and both main factions, the state faction and the IRGC faction follow US policy. Obama sought to maintain control over Iran by rewarding it with an international agreement, while Trump sought to maintain control by punishing Iran. The Iranian leadership will continue to be humiliated by America until it escapes American pressure by properly implementing Islam, in place of the Western republican system that it has chosen instead.

Incoming US Secretary of State Anthony Blinken has already highlighted the ongoing situation in Ethiopia in comments during his Senate confirmation hearing this week, indicating that the new administration can be expected to take a position against Ethiopia over this. President Trump had already harshly attacked Ethiopia over its dispute with Egypt, an important American agent, over the new dam that the Ethiopian government is building on its part of the Nile. It was after that that internal conflict erupted within Ethiopia in the Tigray region, compounded by Sudan, another American agent.

Tunisia, the trigger of the Arab Spring a decade ago, was almost the only country where the revolution is supposed to have succeeded, by replacing the dictatorship of Zine el-Abidine Ben Ali with democracy and elections. But ten years after that first revolution, the streets of Tunisia are again filled with protests and uprising, as the people of Tunisia have discovered that nothing substantial has changed for them on the ground. In truth there is not much practical difference between what is called dictatorship and what is called democracy as both are employed to implement Western socioeconomic systems. The purpose of these Western systems is only exploitation of the masses for the benefit of a narrow Western Capitalist elite. The longer these systems continue to be implemented, the weaker we shall become. Ordinary life will not change until Muslims take their affairs in their own hands, overthrow agent rulers, and establish the righteous Islamic Khilafah (Caliphate) State on the method of the Prophet (saw) that shall unify all Muslim lands and restore, across the entire Muslim world, the Islamic social and economic systems that are fully in accord with human nature and deliver real peace, harmony and prosperity for all.

In an astonishing reversal after Brexit, the United Kingdom is refusing to acknowledge the equivalence of the EU ambassadorship to that of other diplomatic missions, arguing that the EU is only an international organisation and not a sovereign state. Trump had tried something similar a couple of years ago when the UK was still part of the EU, and the UK did not side with Trump at that time.

In fact, the UK was instrumental in strengthening the EU’s foreign policy, as long as it remained within the union; the 2009 Lisbon treaty created something close to an EU foreign minister, and the first holder of this office was the UK’s Catherine Ashton. At the time, this position was very important for Britain, and was obtained by floating the name of former Prime Minister Tony Blair as Britain’s possible candidate for EU President. Then, in compromising over the position of president, Britain was able instead to win the foreign policy position for Catherine Ashton, a formidable member of the British establishment and a former leader of the House of Lords in the cabinet of Gordon Brown. By being the first holder of this office, Britain was able to establish its departmental policies and staffing on the basis that it desired, so as to retain influence even afterwards. This became even easier by having the very young and inexperienced Italian politician Frederica Mogherini succeed Ashton. However, now that Britain has left the EU, it is seeking to strike out at the same foreign policy apparatus that it was instrumental in establishing. Even after Brexit, Britain continues to control many elements within the EU, for example through the Benelux countries; but at the same time Britain will exert outside pressure on the EU as part of its continual struggle to impose its own agenda in Europe.

Muslims must take note of these manoeuvrings of the great powers against each other, and in particular the incessant rivalry between Western powers, which provides strong evidence for the feasibility of the establishment of a new entity in the present international situation. The Islamic Khilafah State shall, almost from day one, enter the ranks of the great powers by virtue of its great size, vast population, tremendous resources, geopolitical significance and dynamic ideology. It will have the capacity to immediate liberate all occupied lands, without facing existential threats, as long as it is ruled over by sincere, capable and aware leadership, held to account by an Ummah and indigenous political parties that fully understand their duty and remain completely committed to implementing Islam and carrying its light to the entire world.