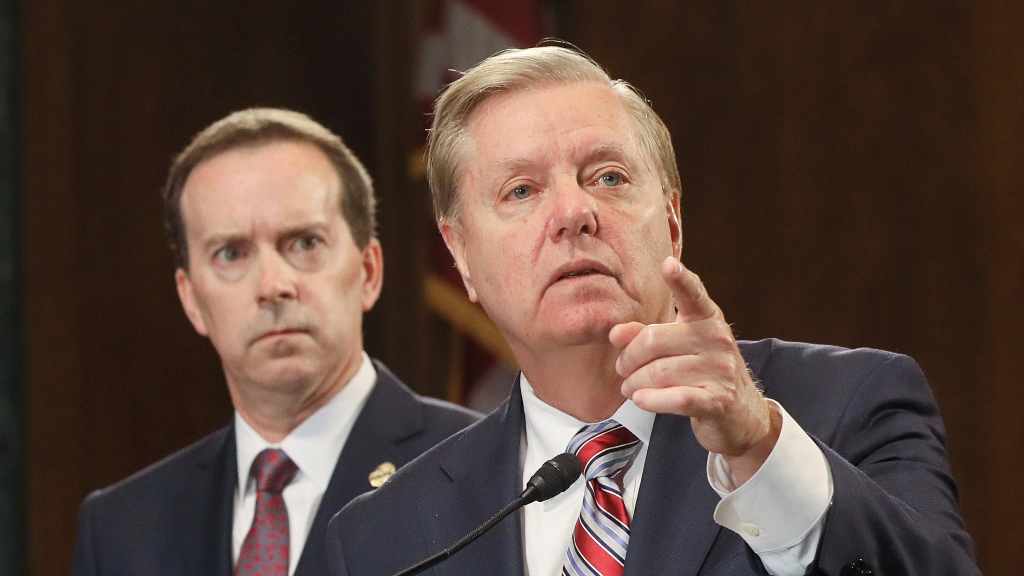 The clash within the United States government continues between senior establishment figures and the US President Donald Trump over his decision to pull American troops out of Syria, allowing Turkish forces to take their place. According to the Washington Post:

Sen. Lindsey O. Graham (R-S.C.) on Thursday called President Trump’s decision to pull U.S. troops out of northern Syria “the biggest blunder of his presidency,” as the three top Republicans in the House took steps toward imposing sanctions on Turkey over its military offensive against U.S.-allied Kurdish forces.

Graham, one of Trump’s strongest defenders, has broken with the president over his sudden decision to withdraw American military personnel, a move that triggered widespread condemnation from Republicans and Democrats. Turkish forces deepened their offensive against the Kurds on Thursday.

Graham ratcheted up the criticism of Trump for his decision and lashed out at Turkish President Recep Tayyip Erdogan at a news conference at The Citadel military college in Charleston.

“The president has abandoned the people who helped us destroy ISIS, chaos is unfolding, and when I hear the president — ‘We’re getting out of Syria’ — my statement to you is this is worse than what Obama did,” Graham said, comparing Trump to former president Barack Obama. “When Obama left Iraq, all hell broke loose, and if you think, Mr. President, ISIS is only a threat to Europe, you really don’t understand ISIS. ISIS is wanting to come after all of us. Not just Europeans”…

Despite US Sen. Lindsey O. Graham continued attack of his predecessor, President Trump is confronting the very same political pressures over Syria that Obama faced both domestically and internationally over Iraq and Afghanistan. Senator Lindsay Graham’s attacks on the Trump presidency are not those of a lone voice but represent the opposition of the entire American establishment to Trump’s plans, as evidenced by the wide support Graham is receiving within Congress.

America’s true purpose in Syria has not been to defeat ISIS, whose existence has been artificially prolonged to provide America with an excuse for its continued engagement. America’s actual objective in Syria has been to defeat the Syrian revolution, which it has undertaken by coordinating an unprecedented number of regional powers, foremost amongst them Russia, Iran, Turkey, Saudi, the UAE and Jordan, each one balanced against the other by assigning them different areas to contain. American forces have also been present but in far lesser number than was the case in Afghanistan and Iraq.

America is undoubtedly the world’s superpower and foremost military power, with weaponry unmatched by any in human history. But America exists on the other side of the world from the continents of Europe, Asia and Africa and suffers considerable diminishment of its powers when acting at a distance. Also, American military power is essentially naval, so it faces a further disadvantage when engaging on land. At the same time, the resurgence of Islam within the Muslim Ummah with its commitment to jihad has led America to fear deploying troops on Muslim land in any considerable number after its military disasters in Iraq and Afghanistan.

It is true that, in the view of the Americans, the Syrian revolution has been crushed, thus allowing Trump to fulfil his previous campaign pledge to end foreign wars and so provide him with a major foreign policy success just in time for his re-election campaign next year. But the American establishment is loath to withdraw American forces for three reasons: firstly, the re-entry of Turkish forces into Syria would upset the internal balance that America has been trying to achieve within that country, making it more difficult to withdraw Iran and Russia; secondly, Turkish expansion would disturb the regional balance as Syria and also Iraq have been much weakened now as compared to Turkey; and, thirdly, after making this huge investment in Syria over most of the past decade, the American establishment lusts for permanent military bases there and will not accept a complete withdrawal on any count.

Inevitably, Trump will have to compromise with the American establishment just as Obama did before him. Western liberal democracy is a facade. Democracy is a theoretical fantasy that has never existed in reality, even in the Greek city states of its origin. The actual Western ruling system is Capitalist oligarchy, with Western governments captured by a small elite for their own vested interests. The greatest pressure on any ruler is that of the people he has to serve. But the Western ruling system, with its division of power, ensures that the executive branch of government can always be contained by the legislature or the judiciary.

With the permission of Allah, subhanahu wa ta’ala, the world shall soon witness a very different model of foreign policy and governance in the re-establishment of the Islamic Khilafah (Caliphate) State upon the method of the Prophet ﷺ. By entrusting the Khalifah with the full authority of the state, Islam obstructs the emergence of powerful elites within the state, thus keeping foreign policy separate from considerations of material benefit. The only domestic pressure the Khalifah faces is the righteous accountability of the Islamic Ummah should he ever deviate from that to which his taqwa has already committed him. Allah (swt) says in the Qur’an: