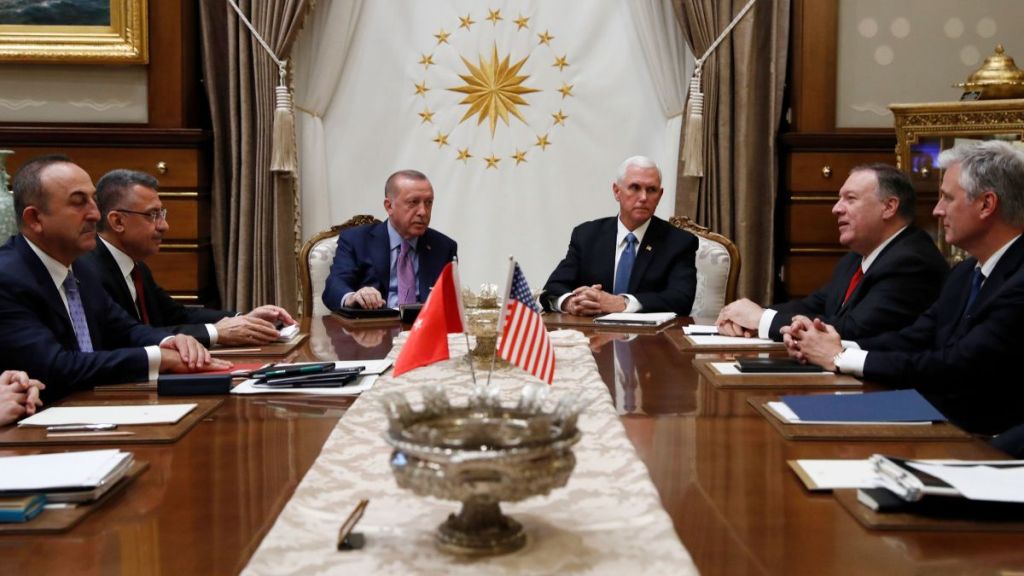 What Erdogan has committed and is committing, is to implement what America wants; to consolidate the tyrant regime in Syria with malicious international, regional and local hands. This is after the chants of the people and their resistance has stunned the regime and America behind it, and its accomplices from Russia to Iran and Turkey’s Erdogan and his conspiratorial factions in the implementation of America’s plans to consolidate the deep-rooted Secular system in the capital of Ash-Sham!

We have already issued an Answer to a Question on 7/12/2016 about the deceptive means of Erdogan in the Shield of the Euphrates and the Olive Branch, which reveals the reality to those deceived and smitten by Erdogan’s rhetoric, thinking that he is supporting them against the tyrant of Syria, it stated: (Added to this is the continuation of Erdogan’s campaign of Operation Euphrates Shield and his attempt to attract more militant factions loyal to Turkey to the battle of Al-Bab after Jarablos, all in order to weaken the real front in Aleppo, which were relied on to lift the suffocating siege on the city and its rescue).

The answer to another question we issued on 29/07/2018 stated: (The second front: it was led by Turkey in the battle of the Shield of the Euphrates north of Aleppo on 24/08/2016 and then the Olive Branch on 20/01/2018, it made it easy for the regime to enter Aleppo and southern Idlib. It is because these factions were ordered by Turkey and left the battles with the regime, and engaged in fighting in the shield and the branch, Aleppo and southern Idlib were lost or almost lost!)

Now the factions are fooled for the third time in Operation Peace Spring! This campaign has revived the regime and increased its gains by an order from Trump and his green light: [(Turkish writer and political analyst, Javad Gok, said that “without an American green light” Turkey can not move in the east of the Euphrates … (tamuz-net 6/10/2019)]. The White House announced that [(US forces would withdraw from northern Syria as Turkey prepares to launch a military operation there, this was after a telephone conversation between US President Trump and his Turkish counterpart Erdogan. (CNN Arabic 7/10/2019)]. Confirming America’s orders and seeking its pleasure: [The White House spokesman announced on Tuesday, the expected visit of Turkish President Recep Tayyip Erdogan to America on November 13th … (Al-Mashhad Al-Araby, 8/10/2019)]

As for Trump’s statements about sanctions and threats [US President Donald Trump imposed sanctions on Turkey on Monday and demanded that it stops the military incursion in northeast Syria … (Reuters 15/10/2019)], these statements are out of deception and misinformation, because how can Trump grants the green light to Erdogan and he continues in his campaign, then he threatens him with sanctions and orders him to stop his campaign? Unless Trump’s order for  Erdogan’s campaign is about to end, and the sanctions are an exit! Thus, Erdogan carried out his campaign on the order of America, and will stop at the limits allowed for him to reach, whether he achieved something for himself or not, since the purpose is to implement America’s plans to restore the areas, that were not controlled by the regime, back to the regime. and formally introduce it as an entity recognized internationally and regionally! The statements of the people reveal this clearly: The international coalition confirmed on Tuesday, [the withdrawal of its troops from the city of Manbij, northern Syria. This was announced, according to Colonel Myles B. Caggins, military spokesman for the Operation the Inherent Resolve (OIR) of the coalition on Twitter. … (Arabi21, 15/10/2019)].

According to a statement by the Russian Defense Ministry that (the Syrian government army has completely took control of the city of Manbij and its surroundings … (France 24 / AFP 15/10/2019)) … Erdogan considered the entry of the Syrian army to Manbij is positive not negative! [Erdogan also stressed that the entry of the Syrian regime army in the city of Manbij is not negative … (Al-Arabiya 16/10/2019)]… The US Vice President said that: [he will lead a delegation to Turkey soon, and that the US president spoke with his Turkish counterpart Erdogan and demanded an immediate end to the Turkish invasion of Syria … (Al-Ghad Channel 15/10/2019)]… The Turkish newspaper, Jumhuriyat, that the Turkish Defense Minister Akar reported [that Ankara is looking for ways to communicate with the Syrian regime… (Arabi21 15/10/2019)]. Moscow announced that [the governments of Damascus and Ankara are engaged in an ongoing dialogue following the Turkish military operation in northern Syria … (Petra) Ammon Agency 15/10/2019)]. Thus, Operation Peace Spring campaign gives new gains to the regime, and a consolidation of its entity, and a prelude to negotiation with it, which would not have been achieved without all these ominous campaigns!

All this reveals that the sacrifices of the people of Syria and the blood that was shed and the honour that have been violated and the crimes of the followers, supporters and tools … carry no weight and value by those people for the sake of pleasing America and its plans! May Allah destroy them how are they deluded. They think that by these malicious acts that they will bring back the people of Syria to the arms of the tyrants the aides of the colonial Kuffar again… But this treacherous clique will be destroyed, Allah willing, and will flee having achieved nothing, because those who rose up want to bring the light that calls: “It is for Allah, it is for Allah”… Such people will not be shaken by difficulties, but add strength to their strength, and they are, Allah willing, on the straight path, and will not submit to the subjugation, and will not surrender in humiliation, but they are the men of men, they are aware that Allah is with them in good times and bad, and they are motivated by the Book of Allah (swt) and the life (Seerah) of His Messenger ﷺ like the noble Companions, to continue to work to change the tyrants and establish Allah’s Law, the Khilafah Rashidah (righteous Caliphate).

Whenever life becomes difficult for them, it is followed by ease; with hardship comes ease. Whenever America and its supporters thought that victory is on their side, they realize that the matter is greater than what they think, and their actions become confused and their statements full of contradiction! Anyone who studies the matters will learn the lesson and not just any lesson; although the international conflict in Syria is almost non-existent, as well as regional and local, because America is in control of all this, yet America has not been unable to formulate the rule in Syria and stabilize its influence for ten years of recruiting their troops and tools until now! Whoever reflects on this knows that falsehood must be defeated even after a while, even if tyrants succeed in a round they will lose the rounds, and the days of varying conditions will alternate among the people…