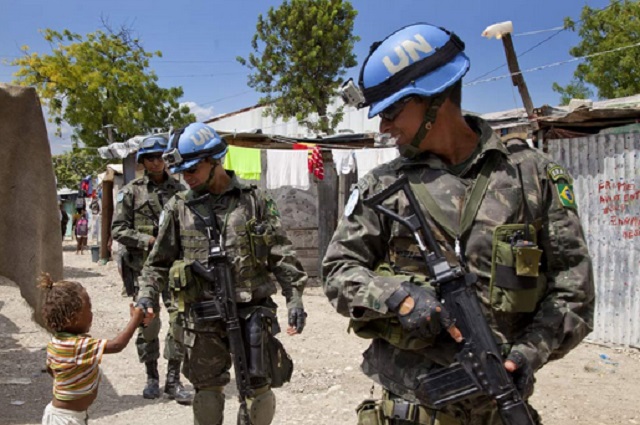 The British newspaper, The Times, published a report entitled “UN staff ‘responsible for 60000 rapes in a decade’.” This report comes in the wake of the extensive coverage by the newspaper of the new revelations in the scandal that shook this “charity” organization; where it published on its front page a report revealing that Oxfam had appointed Roland Van Hauwermeiren as its branch director in Haiti, who was later at the heart of the scandal of dealing with prostitutes during the organization’s work to rescue the earthquake victims in Haiti, two years after he was expelled from another British relief organization on allegations of using prostitutes as well!

The Times report, published on the sidelines of the Oxfam case, quoted the former chief of staff at the United Nations Emergency Coordination Center (UNCC), Andrew MacLeod, who accused the UN staff of committing thousands of rapes around the world. McCloud points out that there are about 3,300 pedophiles working in the international organization and its agencies. He has based these estimates on the fact that one out of every 10 cases of rape or sexual assault committed by international workers is reported.

As a result, a United Nations report on the work of the peace-keeping forces of the international organization has demanded that countries whose soldiers have been confirmed to have engaged in sexual harassment of children are to be prevented from participating in international peacekeeping operations.

As the proverb says, “Her protector is her thief!” The organization that claims to defend human rights, women and children and protect them from violence, is the one in which a number of its employees practice this violence! The supposed security guards are the executioners! This is just one example of a plethora of examples of the paradox that these international organizations are experiencing, which represent the ruthless, rotten capitalist system that offers itself as the protector of rights, while in fact it stands with the strong against the weak and with the rich against the poor, implementing the dictates and agendas of the powerful states at the expense of the vulnerable states…

Who is worthier to protect you and ensure your interests and safety … unjust affiliated paid organizations or a just and strong divine system; a system that can be applied only through the Khilafah Rashidah State (righteous Caliphate), which rules by the law of Allah and applies its provisions? The Almighty says:

“And who is more unjust than one who is reminded of the verses of his Lord; then he turns away from them? Indeed We, from the criminals, will take retribution.”