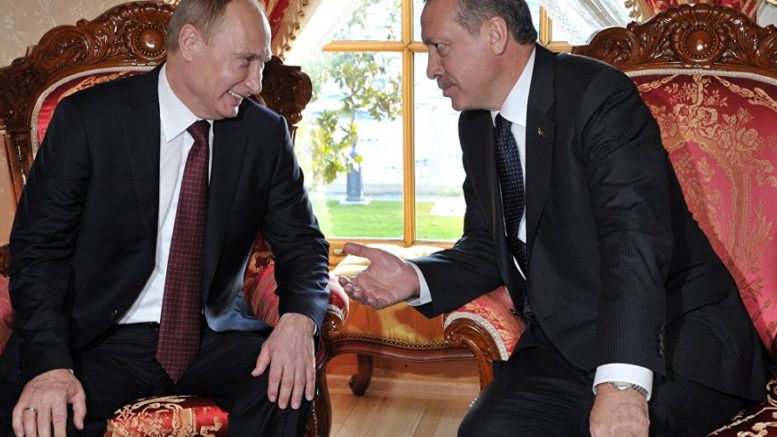 President Erdogan visited Russia on 9th August and after the meeting with Vladimir Putin, some important steps were taken that will change the equilibrium in the region. Turkey and Russia formed committees and the first meetings has been completed. (News)

America has performed countless meetings with Russia about Syria where America demanded from Russia to engage in Syria. because even though they have some differences in the detail, they agree that there should be a puppet state in Syria and that no Islamic state should be established. According to Reuters, Russia and the US have come to an agreement in Syria on subjects such as unified maps, intelligence and are working together on the subject of Syria. Russian Secretary of Defence has stated that military authorities from both countries think that they need to cooperate in Syria. In the Press Release, the Russian news agency RIA quoted, “We are in very active negotiations”. US Director Elizabeth Trudeau, Office of Press Relations stated on this news, “So we’ve seen the press reports of the Russian defense minister’s comments. We have nothing to announce at this time.”

Russia made an agreement with the US and then in September 2015 in the aftermath of Russia’s direct engagement in Syria, hundreds of Muslims were massacred and thousands were wounded. But on 24th November 2015 Turkish Jets shot down a Russian fighter that was bombing Syria and trespassed Turkish airspace. After this relations between Turkey and Russia were frozen. Turkey filled in the coalition that was formed under the pretext of ISIS with de facto support of jets thinking that Russia would respond. In the end these developments weakened the coalition between America-Russia-Turkey-Iran which are the most effective nations on the subject of Syria.

A meeting took place on 9th August between Erdogan and Putin in order to reinstate these relations. In this meeting, they agreed to establish a 3-way mechanism involving the ministery of foreign affairs, the army and the intelligence. That is why on 10 August a Turkish committee was sent to Russia and afterwards the Secretary of State Cavusoglu gave this statement, “We have come to an agreement with Russia. Russia demanded from us the intelligence of where we would not strike.” Prime Minister Binali Yildirim displayed his expectations by stating “Do not be surprised if we see worthwhile developments on the subject of Syria in six months.”

Shortly after the Turkish committee’s visit to Russia on 12 August Secretary of State of Iran Zarif visited Turkey and their main topic was Syria. In the combined Press Conference both sides used this statement, “We have agreed upon the main principles and the territorial integrity in the solution of the Syrian crises…” Afterwards Russian Deputy Secretary of State Mihail Bogdanov, stated that Russia, Iran and Turkey may recently make a three way meeting on the subject of Syria.

All these developments show us that the US and Russia came to another agreement on Syria and that they would like to include Turkey and Iran in a more effective position. The objective is to end the Islamic struggle that has been continuing for the last 6 years and to reinstate their evil plans. No doubt the solution of the Syrian crises won’t be with America’s plan nor Russia’s plan. Turkey can never bring the Syrian crises to an end by opening its airspace and bases to the US, and Iran to Russia and by establishing cooperation in military, intelligence and foreign affairs and by direct engagement. On the contrary they would be responsible for the massacres of the Muslims. If Turkey is going to take a side, Turkey should stand beside the Syrian people and the Mujahedeen. No doubt what we saw in this process has shown that Allah is beside the Syrian Muslims and is opposed to the Kuffar. The most recent example on this is that despite all impossibilities in Aleppo, the breaking of the siege of Aleppo with the help of Allah سبحانه وتعالى and the opening of other areas.