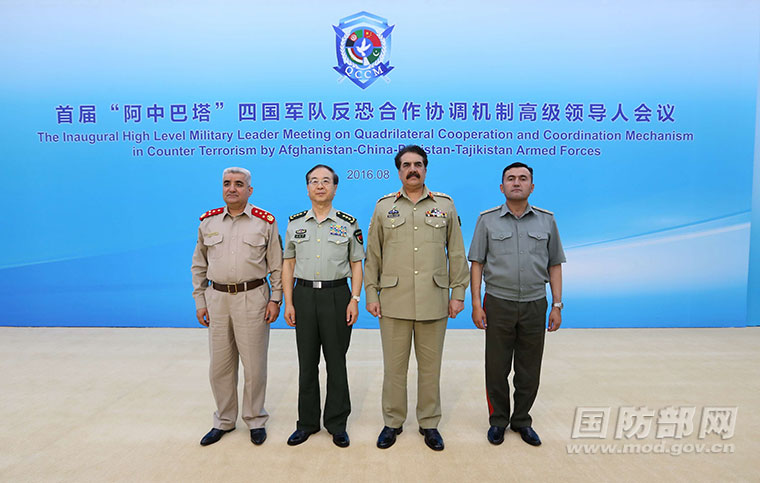 At the 10 August 2016 meeting in the city of Urumqi, Xinjiang Uygur Autonomous Region of China, with the participation of the commanders of the armed forces of Tajikistan, China, Pakistan and Afghanistan, it was decided to build an anti-terrorist coalition to combat so-called “terrorism” and ensure stability in the region.

The meeting was held under the supervision of the Chief of General Staff of the People’s Liberation Army (PLA), a colonel-general Fang Fenghui.

Recall that on 28 and 29 February this year, military leaders of China and Pakistan Fang Fenghui and Raheel Sharif attended an official visit to Tajikistan and during the visit held a series of meetings with high-ranking Tajik officials, including President Emomali Rahmon, with no coalition creating reported. Then on 02 March 2016, Fang Fenghui visited Afghanistan and met with President Ashraf Ghani. During the meeting Fang Fenghui stated that China would provide 72 million dollars to Afghanistan as aid to maintain stability in the region. At that time, the Chinese general stressed the importance of cooperation between the special services of Tajikistan, Afghanistan, China and Pakistan.

It should be noted that the creating of a military coalition led by China, is economic in nature, that is, in fact it is – the protection of Chinese investments in these countries and not more than that. Although the international media reacted to these events with headlines that China allegedly creates a “Central Asian NATO”, when examining the situation in detail, it is clear that they do not quite correspond to reality.

Thus, on 13 March 2016 the Afghan agency, Khaama Press, referring to NDTV stated that China plans to deploy troops in Pakistan to protect the 3000 km China-Pakistan “economic corridor” that connects Gwadar port in Balochistan with Xinjiang Uygur district in China. Moreover, Zamir Kabulov, a special representative of Russian President in Afghanistan, said that in Moscow he with Deng Sitszyun, a special representative of the Chinese Foreign Ministry in Afghanistan, discussed the  recent visit of the Chinese general on March 15 this year in Kabul, and in the negotiations questions were raised about economic issues in view of the fact that China’s investing in various projects in Afghanistan. “We have agreed to consider the possibility of joint participation in some joint projects in Afghanistan, but without specifics,” he said.

Also the fact that Russia does not give the event special attention indicates that the building coalition does not pursue serious political objectives, and intends primarily for economic objectives. Tajikistan is in the area of influence and strategic interests of Russia and if this coalition has geopolitical goals Russia would definitely react to them.

Therefore, if we consider the reality of the region, the situation requires from China to protect its investments, therefore China has created such a coalition under the slogan for the protection of its investments. The Chinese use the tyrannical regimes in the region, receiving guarantees of safety of their investments in exchange for the military aid at any moment, as soon as the threat to the rulers of the region will be on the part of the oppressed people.

Thus, the loudly declared anti-terrorist nature of the military alliance is not true, and the new interstate association serves only as a tool to protect the economic interests of China.