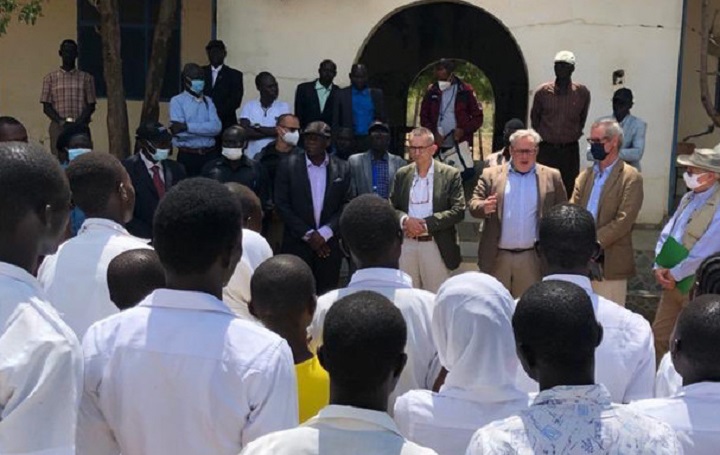 The envoys of the Troika countries, and the Special Representative of the Secretary-General of the United Nations in Sudan, ended talks with the head of the People’s Liberation Movement-North (SPLM-N) Abdelaziz El-Hilu, at the movement’s leadership stronghold in Kauda, South Kordofan. A statement by the envoys representing the United Kingdom, the United States, and Norway said that the meetings were held with El-Hilu over two days, to encourage him to build on the understandings reached in the Declaration of Principles signed with the Sudanese government in Juba on 28th March. The statement applauded the efforts of the two parties to reach a peace agreement, and stressed that the Declaration of Principles “which shows that it’s possible to move forward on important issues like separation of state and religion.” (Sudan Tribune 4/7/2021).

The country has become desecrated, in which the intelligence and foreign missions of the colonial countries roam. They meet with whomever they want, plan and conspire against the people of Sudan. These countries are the same countries that separated the south, with the recognition of the leadership of the government that separated the south, as stated by the head of the defunct regime at the time to the Russian Sputnik site, on 21/11/2017, where he said: “Sudan faces major pressure and conspiracy from the United States, and the cases of Darfur and South Sudan have found support and backing from America, and under its pressure, South Sudan has been separated, which means Sudan was divided. We have information that the US aspiration is to split Sudan into five countries.” And now the same parties are lurking for Sudan from the gates of South Kordofan, the Nile and the Blue Nile.

The intervention of these colonial countries under their supervision and recommendations, with the government’s inability to take any action, confirms that the secular system is incapable of solving people’s problems, as well as incapable of melting them into one crucible, for it is a demonic regime that impoverishes the people, tearing the country apart with ideas of autonomy, federation, and self-determination. The statements of these officials during this visit confirm the malicious goal that it seeks to achieve against Islam; the religion of the majority of the people of Sudan, “The statement applauded the efforts of the two parties to reach a peace agreement, and stressed that the Declaration of Principles shows that it’s possible to move forward on important issues like separation of state and religion.”

The Troika countries violate the sovereignty of the country, and even encourage the People’s movement to move forward in adhering to its conditions calling for secularism, and the dismantling of the country through the right to self-determination or self-rule, as these countries colluded in the secession of the south before.

It came in the statement: “A statement by the envoys… said that the meetings were held with El-Hilu over two days, to encourage him to build on the understandings reached in the Declaration of Principles signed with the Sudanese government in Juba on 28th March”. The most dangerous and strangest thing is that these issues are internal issues, so what do these countries have to do with them? What confirms that they are still exercising guardianship and colonial supervision over these weak governments that they established and supported with their foreign embassies, which are the nests of evil and conspiracy against the people of the country.

We in Hizb ut Tahrir / Wilayah Sudan have always been warning the people of Sudan of the conspiracies being plotted against them to tear the country apart and fight Islam, and this was confirmed by the statement of Russian Foreign Minister Sergei Lavrov on Wednesday 12/4/2017, during a press conference with his American counterpart Rex Tillerson, that “the Obama administration asked the government of Omar Al-Bashir to agree to divide Sudan up into two parts to settle its problem in exchange for not submitting him to the International Criminal Court.” The response of Foreign Minister Ibrahim Ghandour the next day, Thursday, 13 April 2017, was surprising, as he confirmed this conspiracy, saying: “The separation of the south was basically a conspiracy, But we accepted it!” (Anadolu Agency 13/4/2017).

Yes, these countries will continue to conspire, plot, deceive, and make dirty plans to break our will, so that we do not have the initiative to build a strong state that establishes Islam and implements its law. Thus, the people of Sudan should be aware of what is being plotted against them through these colonial states spiteful to Islam, and support the project of the great Islam and its state, the Khilafah Rashidah (rightly guided Caliphate) on the method of the Prophethood, for it is the only one that cuts off the hands of the colonialists and stops their malice and their conspiracies. And on that day the believers will rejoice in the victory of Allah.