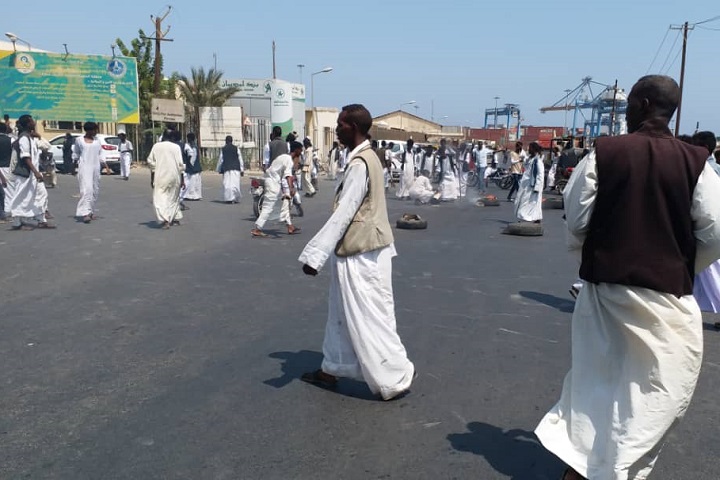 High Council of Beja Nazirs and Independent Chieftains in eastern Sudan, led by the Nazir Muhammad Al-Amin Tirik, escalated protests against the government, by closing the national road and the railway linking the port of Port Sudan and the rest of the country. This step is considered a serious escalation in the issue of eastern Sudan. This is not the first time that the road is closed as a result of protests and demands, as it happened last year.

It is widely known that eastern Sudan is rich in massive wealth, but its people suffer from poor care, lack of services, and even lack of the most basic necessities of life, and this is the case in all parts of Sudan, where the government does not fulfill its responsibility to care and provide basic needs, and the people of the East have the right to demand their rights to a dignified life in the legitimate way.

We in Hizb ut Tahrir / Wilayah Sudan warn our good people in eastern Sudan against falling into the trap of the colonial Kafir, and we clarify the following facts:

First: The government must fulfill its duty to take care of the affairs of all the people of Sudan, including the people of the East, to solve their problems, to ensure that their basic needs are satisfied, such as food, clothing, and housing, and to provide education, health and security for all, free of charge, and to abolish everything that may fuel sedition.

Secondly: The tribe is not to take power or to occupy positions, but Islam has made it a good door for people, for acquaintance and the connection of kinship, so it is not permissible for you to make it evil and a path to conflicts, for this is forbidden by the words of the Prophet (saw):

Third: Rejecting the idea of tribal and regional quotas to hold political positions, or solve life issues, but people are assigned positions according to competence and eligibility, regardless of color, race or tribalism. The Prophet (saw) said: When Abu Dharr asked him to appoint him a ruler, on the authority of Abu Dharr, he said: “I said: O Messenger of Allah, why don’t you appoint me (to an official position)? He patted me on the shoulder with his hand and said:

“O Abu Dharr, you are a weak man and it is a trust and it will be a cause of disgrace and remorse on the Day of Resurrection except for one who takes it up with a full sense of responsibility and fulfils what is entrusted to him (discharges its obligations efficiently.)” (Narrated by Muslim), and to resolve issues on the basis of the provisions of Islam.

Fourth: We warn our people in the East against the idea of autonomy and the right to self-determination, as it is the poisonous dagger of the colonizer to tear Sudan apart. He started it in the south and got separated, and today the agent rulers and politicians use it in the rest of the regions of Sudan, in preparation for division and separation, for unity is an obligation and strength, and disunity is disobedience, weakness and betrayal for the Ummah. Allah the Almighty says:

“and do not dispute and [thus] lose courage and [then] your strength would depart; and be patient. Indeed, Allah is with the patient.” [Al-Anfal: 46].

So, in order not to lose the strength of this country, its might and position, and readiness to be the nucleus of a strong state, that establishes Islam and applies its law, be its leaders and masters with your awareness, and your undermining strife, and by missing the opportunity to the enemies of Allah lurking in this country.

In conclusion: Hizb ut Tahrir invites you to work together to undermine the strife in eastern Sudan, and in all regions of the country, but rather in the whole world, through the establishment of the rule of Islam in its state, the Khilafah Rashidah (rightly guided Caliphate) on the method of the Prophethood, which the Prophet (saw) gave its glad tidings in his saying:

“Then there will be Khilafah according to the method of Prophethood.”