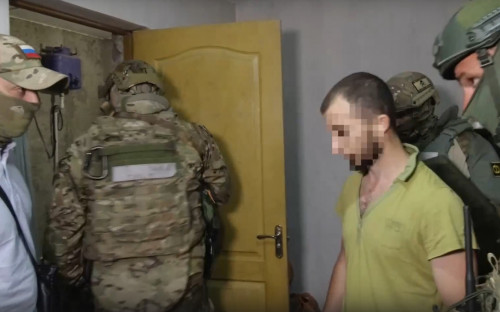 The FSB (Federal Security Service) detained those propagandizing the “world caliphate” in the Kaluga region. In early November, the FSB uncovered a similar unit in Kazan. They also operated under the auspices of Hizb ut Tahrir al-Islami. (Source: rbc.ru)

Comment:
Russian special services have once again reported on the detention of people accused of involvement in Hizb ut Tahrir.

When among Muslims, in particular, Crimean Muslims, Crimean Tatars, such repressions of the Russian authorities are discussed, you can often hear the idea that “there is no smoke without fire”, that if they were detained under such a serious article, which implies 20 years in prison, so then there is a reason, then that there is some kind of threat from these people and the special services have some information that is unknown to ordinary people.

To understand the inconsistency of such statements, it would be sufficient basically to turn at least to the sentences under the so-called Crimean cases of Hizb ut Tahrir, as well as to the transcripts of court hearings.

For example, the persons involved in the “second Bakhchisarai group of Hizb ut Tahrir” are accused of meeting in a mosque where issues of Islamic morality were discussed. That is, the accused are charged with the discussion of issues of fear of God and Islamic morality at a meeting in which several dozens of people participated.

In all criminal cases of Hizb ut Tahrir, there are no weapons and explosives, preparation for committing any terrorist acts, etc..

In the text of the sentences, in the section “Instruments of the crime to be destroyed”, tablets, telephones, CDs, Islamic flags and brochures are indicated. This alone is enough to make sure that the charges of posing a threat to society are untenable.

Nevertheless, this superficial idea that “there is no smoke without fire”, that is, if they are arrested by the authorities, “then there is a reason”, continues to be present among Muslims.

Therefore, there is a need to dwell in more detail on this incorrect statement and refute it.

First of all, it should be noted that this idea could be considered correct if Russia were our state – a state of Muslims, which corresponds to their concepts, aspirations and hopes. Then we could respect the special services of this state, consider them to be the real defenders of the interests of Muslims and make husni zann (a good guess) about them that if they detained any of the Muslims or non-Muslims, then there are strong reasons for this.

Nevertheless, in the case of the Russian special services, husni zann (favorable judgment) should be done not in favor of these bodies, but against them, since they are known for their corruption, as well as crimes not only against Muslims, but even non-Muslims among their citizens. The position of today’s Russian special services is such that husni zann should initially be done in relation to who is detained by these criminals in uniform. After all, everyone knows that all Russian state bodies, and especially power structures, are mired in corruption and crimes against their own citizens.

Perhaps someone will say that the modern Russian Federation is fundamentally different from tsarist or communist Russia.

But has the modern Russian government condemned the crimes of the tsars and the communists? Or, on the contrary, raised them even more to the rank of great heroes, as indicated by the monument to Catherine II in the Crimean capital Simferopol and the annual celebration of the annexation of Crimea to Russia in 1783?

Hasn’t the current Russian government in 2015 installed a new monument to the executioner of Crimean Muslims Stalin in Yalta, and also sent into the sky huge portraits depicting this criminal on the anniversary of the so-called victory in the Great Patriotic War? But has the modern Russian government condemned the crimes of the tsars and the communists?

Isn’t this modern Russian state in the best tsarist traditions persecuting imams and mullahs for conducting religious rituals without the permission of the authorities within the framework of the notorious Yarovaya package?

Is it not this state that opened dozens of cases under articles on extremism and terrorism, persecuting any dissenting Muslim, regardless of his affiliation with one or another Muslim organization?

This state fabricates administrative and criminal cases even against those Muslims who submitted to the Spiritual Directorate of Muslims of Crimea, headed by Emirali Ablaev, singing laudatory odes to Russia and the so-called Russian head of Crimea S. Aksenov.

It is regrettable to see how some of the Muslims succumb to the false propaganda that “if you are arrested, then there is something for that”, while by doing so they spit in the face of their ancestors, their grandparents, who were exiled on May 18, 1944 by the communist government that vanished from the face of the earth. After all, then in a similar way, the words were replicated that if the Crimean Tatars were deported from Crimea, then there were strong reasons for this, that there is no smoke without fire.

Indeed, with the adoption of this false idea today, they agree that their parents who died in the places of exile had something to deport from Crimea.

Undoubtedly, today’s Russia is a pitiful likeness of the Soviet Union, which cannot be compared with it in terms of power and influence. Muslims of Crimea in the 1960s-80s of the last century did not believe in empty accusations of their enemies and opposed them, thanks to what they achieved the right to return to their native lands in Crimea even during the existence of the Union.

Therefore, in today’s situation, when Russia does not possess even a hundredth part of the power and influence of the USSR, we, the Muslims of Crimea, are all the more obliged not to succumb to the influence of false propaganda and oppose the tyrant, condemning his crimes.

Acceptance of the correct thought “there is no smoke without fire” indicates that a person has accepted this criminal state as his state, which is unacceptable for any Muslim, taking into account all the crimes that this state has committed and is committing against all Muslim peoples since the time of tsarist Russia, communists and modernity.

We call on Muslims who have fallen under the influence of this false thought to open their eyes and be on the side of truth, on their own side, on the side of their religion, concepts, their history, which gives a clear and precise idea of the events taking place around us.

To argue that there is no smoke without fire is a manifestation of obvious political myopia, which can only be inherent in stupid people who have forgotten about their religion, history and crimes that the enemies of the Islamic Ummah committed against our ancestors.