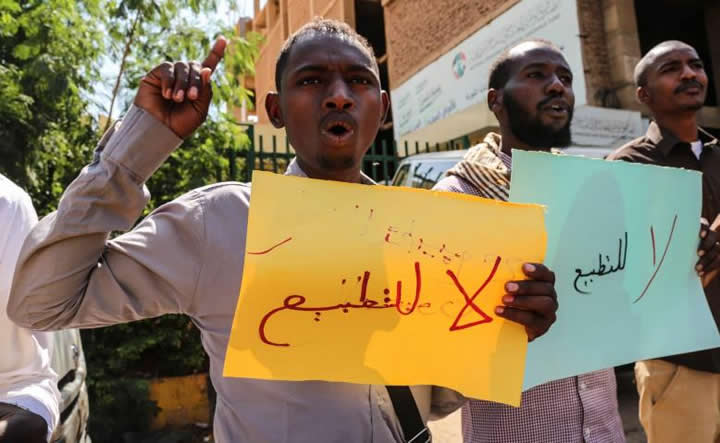 The news reported that a military and security delegation includes the Director of General Intelligence, Lieutenant General Jamal al-Din Abdul Majeed, and the head of the Intelligence Authority, Yasser Muhammad Othman, and the sources suggested that Minister of Justice Nasreddin Abdul-Bari was part of the delegation that also includes military and politicians, and that the delegation will arrive at the Jewish entity that usurped the lands of Isra and Mi‘raj, on Friday or Saturday in conjunction with the celebration of the so-called National Day of the Jewish entity. This visit is the first official visit of its kind, concurrently with intentionally presenting greetings on the occasion the Jewish entity usurping Palestine and its blessed Al-Aqsa Mosque.

We in Hizb ut Tahrir / Wilayah of Sudan, and with us, all the sincere Muslims of the people of Sudan, have absolved to Allah (swt) of this ugly, reprehensible act that the transitional government of Sudan has undertaken, and we affirm the following:

First: The visit, as stated in the news, is intended to congratulate a Jewish entity for its usurpation of an Islamic land, but rather a holy land, and this is a betrayal to Allah, His Messenger (saw) and the believers. It is an explicit recognition by the transitional government of Sudan of this monstrous entity, a recognition that does not represent the Muslim people of Sudan who are eager to liberate Palestine and its Al-Aqsa Mosque, but rather all the occupied Muslim countries.

Second: It is a shame and a disgrace for the government of humiliation and ignominy to offer this cheap recognition, begging for so-called economic gains from which we can only gain mirage and above all the anger of the Lord of the servants.

Third: We are certain that whoever relies his decisions onto the Kafir colonizer or usurper, and his first and last concern is the satisfaction of the colonial Kuffar, even if it was at the expense of the survival and security of the Ummah, we are certain that no good will ever come from him, therefore, we are not surprised by his rapprochement with the brothers of monkeys and pigs and worshippers of Taghut, of whom Allah the Almighty said about:

“Say (O Muhammad (saw) to the people of the Scripture): “Shall I inform you of something. worse than that, regarding the recompense from Allâh: those (Jews) who incurred the Curse of Allâh and His Wrath, and those of whom (some) He transformed into monkeys and swines, and those who worshipped Tâghût (false deities); such are worse in rank (on the Day of Resurrection in the Hell-fire), and far more astray from the Right Path (in the life of this world).” [Al-Maidah: 60].

In conclusion: No matter what the normalisers normalised from the Ruwaibidhat (vile and foolish rulers) of this time, among the rulers of mischief in Muslim lands with the monstrous Jewish entity it is shameful and dishonourable, written in their history books until Allah (swt) establishes for this Ummah a Khilafah Rashida (Rightly Guided Caliphate) upon the method of the Prophethood. Its Khaleefah leads the Liberation Army, which restores Jerusalem and the sanctities back to Islam and its state, in fulfillment of the good news of the Messenger of Allah (saw). In the hadith narrated by Muslim on the authority of Nafi’ on the authority of Ibn Umar on the authority of the Messenger of Allah (saw) He said:

“You will fight against the Jews and you will kill them until even a stone would say: Come here, Muslim, there is a Jew (hiding himself behind me); kill him.”