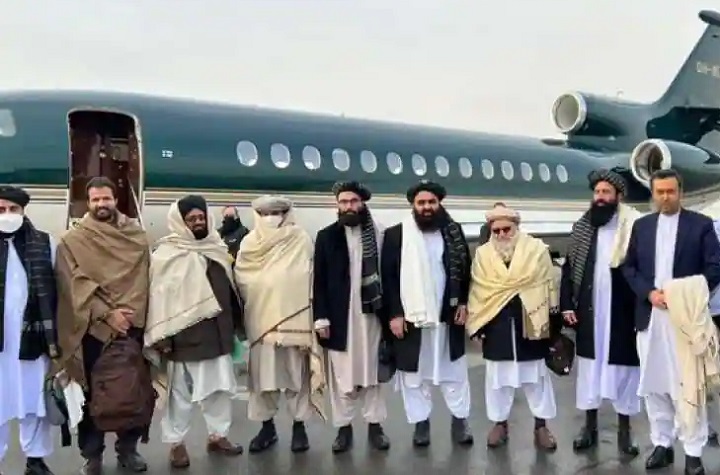 The Taliban Leadership will End Upon What the PLO Concluded with, A Great Betrayal against Islam and Muslims

Taliban and Western diplomats are holding a meeting outside Norway’s capital Oslo for talks focused on Afghanistan’s humanitarian crisis, which has escalated drastically since last August when the Taliban stormed back to power 20 years after being toppled in a US-led invasion. The closed-door discussions with representatives of the United States, France, Britain, Germany, Italy, the European Union and Norway are being held on 24 January at the Soria Moria Hotel, on a snowy hilltop outside Oslo.

Comment:
The leaders of the Taliban refused the offer of Hizb ut Tahrir for them to establish a state that would rule by the Book and the Sunnah. The leaders of the movement then refused to merge their cause with the cause of the wider Islamic Ummah. Consequently, the people of Afghanistan were reduced into, within a few months, the hungry, who could not find a living, and the seeker of sanctuary, queuing at the borders and airports fleeing the country. The people were brought down and the human energies that were supposed to be used to build the country were exhausted. After all this and other tragedies, the leaders of the Taliban movement turn their faces towards the West that is stalking Islam and preying on Muslims. They turn to the West which has always deceived the people of Afghanistan and formed military alliances that crushed the fortresses of Afghanistan, martyring its people, widowing its women and orphaned its children. So is all this missed by these leaders, erased from their memory? Are such leaders worthy of leadership?!

When the leaders of the Palestine Liberation Organization, headed by the greatest traitor Yasser Arafat, went to Oslo in 1993, the last chapters began for the liquidation of the Palestine issue, which resulted in the formation of a Palestinian “Authority” that acts as a security guard for the occupying Jewish entity. The discussions that will be held with the Taliban are headed in the same direction. Thomas West, the U.S. special envoy for Afghanistan, is in the Norwegian capital for the talks with the Taliban delegation. The US State Department said West’s delegation would discuss “the formation of a representative political system, responses to the urgent humanitarian and economic crises, security and counterterrorism concerns, and human rights, especially education for girls and women.”

What will be agreed upon between the two parties, whilst the Taliban leaders will not lag behind in implementation, is the forming a functional and civil political system on a Western model, which does not rule by Islam, but instead prevents the return of Islam and pursues advocates for the return of the Khilafah, which the US State Department calls “security and counterterrorism concerns.” What is also required is the Westernization of Afghan society and its secularization, as Muhammad bin Salman does in the land of the Haramayn, which is what the West hides behind the veil of “education for girls and women.”

Whilst the West ensures that the Taliban movement’s leaders implement these plots against the people of Afghanistan, whilst these leaders market what they were ordered to do, the West has not taken any practical step, even as a way to show “good intentions.” No country has yet recognized the Taliban government and even hosting them in Norway was not a tacit recognition of them. Norwegian Foreign Minister, Anniken Huitfeldt, stressed that the talks were “not a legitimation or recognition of the Taliban.”

The “international aid” for Ghani’s puppet government, which financed about 80 percent of the Afghan budget, was suddenly stopped, whilst the United States froze $9.5 billion of Afghan assets in American banks, resulting in a significant deterioration of the situation in Afghanistan. The United Nations has warned that 95 percent of the Afghan people will suffer from hunger. Unemployment rates have risen dramatically and the salaries of government employees have not been paid for months in lands devastated by many waves of drought. From this data, the observer can conclude that the Taliban movement’s going to Oslo was not for negotiations but for instructions. There is no negotiation as the movement does not have anything to negotiate over, just as happened with the leaders of the Palestine Liberation Organization, when they too laid down arms and traded in the blood of the martyrs in Oslo, ensuring the liquidation of the Palestine issue. The truth is that the Taliban will become like the PLO. The Taliban leaders went to Oslo after they made various pledges to fully submit to the crusader and the hateful international community. Then they will return to Afghanistan to carry out the betrayals they were instructed to.

If the sincere people of Afghanistan and the Taliban movement do not rectify their affair, then the enormous sacrifices that they made will end up in what the sacrifices of the people of Palestine ended up with, a mockery of authority under the bayonets of the enemies. A weak, fragile and poor civil state, dependent on the consent of the crusader alliance. With this they have lost this world and the hereafter, so the faithful in the movement and the people of Afghanistan must clean their ranks from the leaders who extend their hands to the West. They must return to accept the offer of Hizb ut Tahrir and give it the Nussrah to establish the Khilafah (Caliphate) that depends only on Allah (swt) and the efforts of the Islamic Ummah.