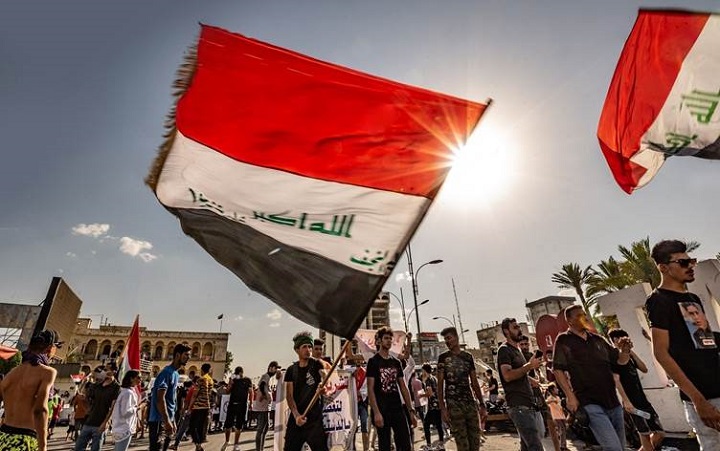 After the demonstrations that Iraq has witnessed in the capital, Baghdad and the southern provinces, due to the deteriorating situation and the rampant corruption in all parts of the state, and the subsequent resignation of Prime Minister Adel Abdul-Mahdi and the advent of Mustafa Al-Kazemi, who promised to eliminate corruption and hold early elections on October 10, and what this decision contained of an alleged solution to the misery and suffering of the people, which was portrayed as a panacea for the wounds of this afflicted people… For a while, the Iraqi government has been doing its best to make these elections a success after the people’s reluctance to do so and it is trying to convince the street that these elections will be fair and that there are international observers to ensure election integrity, as if it is addressing non-Muslims, as the Shari’ ruling is no longer mentioned in its ruling! And they minimalizedthe issue into the good or the corrupt person, even the Marjieyah is urging not to choose the corrupt under the saying “the tried is not tested”, neglecting the statement of the Shari’ verdict about it! Thus, they concealed the Shari’ ruling that restricts the actions of the servants.

Although these elections are the biggest lie invented by the American occupation in Iraq, as it established the quota system that spread corruption in the state’s apparatuses and left it backward in all political, economic, security, military and social fields. It made the system of government federal and divided the powers among the components; the presidency of the executive authority (the government) is for the Shiites, the presidency of the legislative authority (the parliament) is for the Sunnis, the presidency of the republic is for the Kurds, and it set the constitution, leaving the people to choose who implements this system. However, what concerns us as Muslims is the Shari verdict in these elections, and here we must understand the reality of the elections and show the Sharia rule about them.

The reality of the election is the selection of someone to be a representative or a deputy on behalf of the group to carry out a certain action. It may be in the leadership of travel, reconciliation between the disputants, or the rule in which the ruler takes charge of the affairs of the Ummah. Thus, election is representation and deputyship, and is Mubah (permissible) as a style. However, Islam focuses the rule on the task which the elected representative would perform and not on the style. The Shari’ rule says “the deputy is like the one who is represented.” If the actions that a person performs are permissible, the deputyship is permissible, and if these actions are prohibited, then the deputyship is also prohibited. And to know the Shari’ verdict about the upcoming elections in terms of (candidacy) and (election), it is necessary to know the work of the Legislative Council or Parliament, in order for us to find out whether the deputyship is permissible in this work or not.

The most important tasks of the Parliament are:

First: Legislating laws that are binding to the executive and judicial authorities, and this is one of the Parliament’s most dangerous acts and clearest acts of disbelieve, because it disputes with Allah Almighty in the sovereignty and makes it for man and not for Allah (i.e., His Law), the Almighty said:

Second: Electing the head of the state or the prime minister who rules by other than what Allah has revealed, and this is forbidden by Shariah because Allah Almighty says:

“And whoever does not judge by what Allah has revealed – then it is those who are the disbelievers” [Al-Ma’ida: 44].

Third: Granting confidence to the government or withholding it from it on the basis of the Kufr constitution that was established by the occupier, and make it the basis and reference in settling disputes, and Allah Almighty says:

“O you who have believed, obey Allah and obey the Messenger and those in authority among you. And if you disagree over anything, refer it to Allah and the Messenger, if you should believe in Allah and the Last Day. That is the best [way] and best in result.” ]An-Nisa: 59].

These are the most prominent acts, and there are others related to foreign policy and domestic policy, such as the conclusion of agreements and treaties that enable the disbeliever on Muslim countries and Allah Almighty says:

“And Allah will never allow an authority to the disbelievers over the believers” [An-Nisa: 141]. And the policy of education and the judiciary, all of which are based on secularism and the doctrine of separating religion from life.

Accordingly, and from the foregoing, participation in these elections in candidacy and voting is forbidden by Sharia. Because it is a mandate for what Allah Almighty has forbidden, a mandate for people who will rule the country by virtue of the Taghut (the democratic system), which is a system of Kufr; Because it gives the authority to legislate for humans without Allah Almighty, in addition to the disasters and calamities that they will bring to the country and people.

O Muslims in Iraq: We have been sincere in advising you from the first day that the occupying Kafir entered our country, and we have clarified the Sharia verdict in all the events that took place, and here we are today reminding you, in compliance with the Almighty’s saying:

“And remind, for indeed, the reminder benefits the believers.” [Adh-Dhariyat: 55].

And we repeat that until Allah Almighty authorizes His promised victory for the believing group that has been working for a long time to resume the Islamic way of life, by the establishment of the Khilafah Rashidah (rightly guided Caliphate) state on the method of the Prophethood, so that the word of Allah is the highest and the word of those who disbelieve is the lowest.

“O you who have believed, respond to Allah and to the Messenger when he calls you to that which gives you life. And know that Allah intervenes between a man and his heart and that to Him you will be gathered.” [Al-Anfaal: 24].