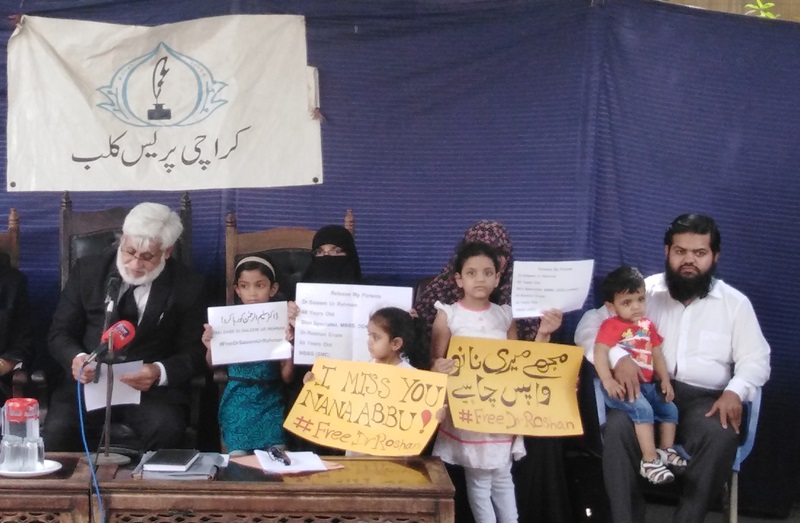 In the early hours of Monday night, 13/8/2018, Pakistani security forces raided Dr. Roshan’s house and kidnapped her with her husband. The kidnapping came just two weeks after Sister Romana Hussein was kidnapped after finding Hizb ut Tahrir books and leaflets in her home.

Dr. Roshan is one the Dawah carriers known for calling for the establishment of the Khilafah (caliphate) on the method of Prophethood. She gave lessons and lectures throughout the vast city of Karachi, and has worked tirelessly for years to bring Islam to power to resume the Islamic life as a way of life for all people.

Sister Romana Hussein is a well-known teacher of Islam, mother of four children, graduate of psychology and philosophy from the prestigious St. Joseph School and holds a Master’s Degree in Islamic Studies

Two of our sisters in Islam, this is their work and so are their lives, they seek Allah’s pleasure mercy and the propagation of His Deen and to establish it to rule the people. So how did they scare and terrorize you? Or is proclaiming the word of truth became a crime for which the Muslim women are also arrested for?

They are chaste and honourable women, they understood the obligation of their Lord, and followed the path of the Dawah with strong creed and solid belief, not in return for anything but Allah’s pleasure. They are believing women who will not be dissuaded from this great obligation, neither by imprisonment, kidnapping, persecution and torture by rulers who have long claimed to be rulers of the Muslims. They are rulers who oppress Muslims. Their hostility to Islam has become clear and their oppression of Muslims is apparent.

When the security authority kidnaps Muslim women in one of the Muslim countries based on the charge of calling for Allah and raising His word high, this is evidence that the idea of resuming the Islamic life again became a source of sleeplessness to the West and its henchmen of the Muslim rulers, and it is an evidence that the idea of the Khilafah became widespread and accepted among the Muslims. These successive kidnappings are only proof of their relentless unabated efforts to silence the word of truth, but rather with the brazenness against our believing and righteous women.

We ask with condemnation: where is the United Nations High Commissioner for Human Rights that expressed concern about the arrest of female activists and defenders of women’s rights in Saudi Arabia, while turning a blind eye to what is happening to our sisters Romana Hussein and Roshan, and before them Sister Jannat, who was sentenced to five years’ imprisonment by the Russian authorities without any crime except that they are working to uphold the word of Allah and make His Deen victorious?!

This is their double standards regarding humanity, if it exists in the first place, under such a colonial civilization!!