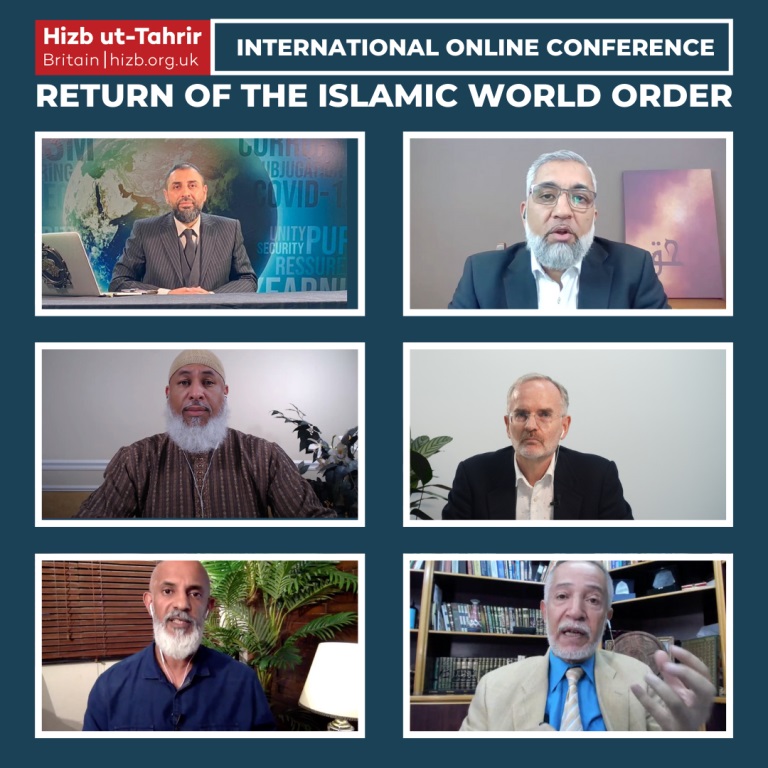 Alhamdulillah and with the blessing of Allah (swt), Hizb ut Tahrir / Britain held an international online conference on The Return of the Islamic World Order. The event on Saturday, 31st October 2020, attracted more than 2000 attendees, who heard from a range of speakers talking on the current multitude of problems in the world today and the Islamic solution for them. Speakers showed how the secular capitalist world is incapable of providing coherent solutions for humanity and in fact lies at the heart of most of the suffering in the world today.

During the two question and answer sessions the speakers addressed the current French hostility to Islam and the pathetic response of prime ministers and presidents in the Muslim world when the Messenger of Allah ﷺ is insulted. Instead of utilising their position to respond in a meaningful way, they only exposed their weakness with their empty words, as they are in fact mere puppets of the West.

Today our Islamic way of life is criticised openly in the media, politicians accuse our values of being backward, our brothers and sisters are slaughtered overseas to secure colonial interests, and our beloved Prophet ﷺ is insulted in the name of free speech. Yet the Muslims are expected to remain silent at this! The conference speakers showed how this must never become acceptable, and narrated examples of how the Khilafah (Caliphate) was able to prevent such abuse in the past.

The conference concluded that the world is yearning for change; for an end to this unjust capitalist hegemony. It is not enough to waste our energies reforming Capitalism, rather the complete implementation of Islam is the only solution that will end the horror and tyranny that is the secular world order.

Working for Islam means working for the return of the Khilafah on the way of Prophethood. Anything less delays the inevitable and prolongs the suffering that the world must endure. The Prophet Muhammad ﷺ was sent as a mercy to all of humankind. He guided us to the true and just way of life, which looks after the affairs of all of the citizens of the state. To ignore that guidance and neglect the implementation of the Islamic Shariah rules is a grave crime, and those rulers who do so must be held to account for their betrayal.

The Muslims are capable and willing to lead the world into a new era of light and prosperity, after the era of darkness and poverty that was imposed upon us by the secular colonialists. It is only the agent rulers of Muslim lands that stand in the way, as they alone fear losing their privilege that was given to them by the West.

It should not be forgotten that not only is Rabii’ ul-Awwal the month of the Prophet’s birth, but it is also the month of the hijrah (migration) of the Prophet ﷺ. The hijrah marked the establishment of Allah’s Deen on the Earth. It was an event that took history in a new direction. Prior to the hijrah the people of Madinah accepted Muhammad ﷺ only as a Prophet. However, when he ﷺ arrived in Madinah, they were receiving him ﷺ as a ruler and a Prophet. Before the hijrah, he ﷺ was a Prophet criticising the values of Quraysh. After the Hijrah, he ﷺ was the one who implemented the values and laws of Islam. Islam had gone from addressing and pointing out the problems, to tackling them and providing solutions for them. It was at this point that the Prophet ﷺ was able to apply the rules and systems of Islam into real life. Umar (ra) is reported to have said: “The Hijrah has separated truth from falsehood, so calculate dates from it.”

We must honour the struggle and sacrifice of the Prophet ﷺ and his Sahabah (ra). We must do this by not only narrating their stories, but by following in their footsteps and behaving as they would when faced with what we face.

When asked by the king of Persia why he had come, the companion of the Prophet ﷺ Rab’iyy Ibn ‘Amir (ra) said: “Allah Azza wa Jal has sent us to deliver you from worshiping the creation to worshiping the Creator of the creation, and to deliver you from the constriction of this world to the vastness of this world and the afterlife, and from the oppression of the religions to the justice of Islam. Allah Azza wa Jal has sent us to save you from worshiping each other.”