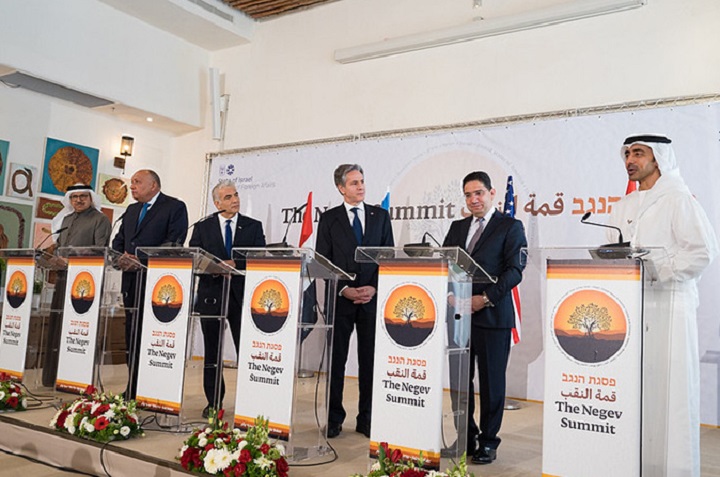 Meanwhile, Jordan’s King Abdullah II arrived at the Palestinian presidency headquarter in Ramallah, on a visit that came to “prevent an escalation of the situation during the month of Ramadan, especially in Al-Quds.”

It has become open and clear to the Islamic Ummah in general and the people of Palestine in particular that these regimes that are agents of the West, those normalizing relations with the Jewish entity, do not move except within the dictates of the West in terms of orders and colonial plans to implement them in our land. The foreign ministers of Egypt, the Emirates, Bahrain and Morocco only acted to serve the Jewish entity and to recognize it in practice through by attending a conference on the soil of the Blessed Land, usurped by the Jewish entity, and to condemn any legitimate action targeting the entity and its occupying soldiers, in a clear confirmation of the “right” of the Jewish entity to exist on all of the Blessed Land and to stigmatize everyone who defends their land, Deen and sanctities with terrorism! They strive to work to change the Shariah, political and historical facts that require the inevitability of the Ummah’s movement towards the liberation of the blessed land as it liberated it before in Hittin and Ain Jalut.

The King of Jordan’s visit to Ramallah comes in the same context, in order to exert his effort into preventing the Ummah from moving against the Jewish entity during Ramadan, because this threatens his weak throne, which was established in the first place for dividing the Ummah and defending the Jewish entity.

The meeting of this junta and the visit of this king will not be able to protect the Jewish entity from the promised day of its removal by the Muslim armies that will inevitably move, as Salah al-Din and Qutuz moved to gain the honour of liberating the Blessed Land, after their feet trample on the thrones of traitors and those normalizing relations (with the Jewish entity). Those who defied the Ummah with their betrayal and provoked its sentiments by meeting with the enemies of the Ummah the usurpers of the Masra of the Messenger (saw) on the Blessed Land that was irrigated with the blood of the Companions and the honourable martyrs who fell in defense of it.

The response to this crude betrayal and flagrant defiance of the Ummah’s feelings, Deen and sanctities can only be done by uprooting these puppet regimes and removing these treacherous thrones to the Ummah. The time has come for the armies of Jordan, Egypt, Morocco and all the armies of the Muslims to uproot these traitors and wipe this shame off the forehead of the Ummah by establishing the Khilafah (Caliphate) on the method of Prophethood, and the liberation of the Blessed Land and the liberation of the Islamic Ummah from this dark era in which the rulers declared treachery and hostility to Islam, the Ummah and the sanctities.