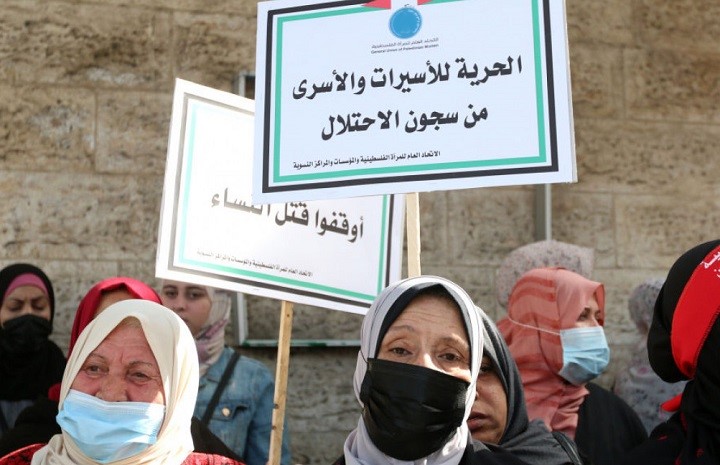 HAIFA, Sunday, March 27, 2022 – A group of Palestinian activists held a protest today outside the ‘Israeli’ prison of Damon, near Haifa, in support of 32 Palestinian women incarcerated in the prison… including 10 mothers.

The protest is an effort to highlight the issue of the Palestinian female prisoners in Israeli detention who are deprived of their right to unite with their families as a result of imprisonment by the Israeli occupation authorities.

There are more than 4,500 Palestinian prisoners in ‘Israeli’ jails, of whom nearly 500 are held without charge or trial under ‘Israel’s’ controversial administrative detention policy. (WAFA)

Comment:
In response to the increasing numbers of imprisoned Palestinians by the occupying Jewish entity and its forces, various activist groups attempt to bring their plight to the public attention. It is the human rights and prisoner associations that do most of these protests, meanwhile the Palestinian Authority is quiet over such crimes considering the fact that hundreds of people from Palestine remain in ‘Israeli’ prisons for long stretches of time some spanning years without official charges held under the notorious administrative clause which allows the Jewish entity to hold the persons arbitrarily without any type of legal reprieve be it from pressure from human rights organization or NGO’s.

Abusive conditions carried out against the prisoners both men and women include depriving family visitations, preventing access to legal counsel, no or little access to proper medication and medical supervision especially after torture sessions. Leaving the prisoners and their families unaware of the legal proceedings if any. The Jewish entity is internationally known for their brutal tactics in dragging in their prisoners and their humiliating tactics in order to break the resolve of the Palestinian people.

Yet back to the earlier point, the Palestinian Authority fails to take authentic measures to protect the people of Palestine and even more to demand the prisoners’ release. This is the reality of such a hostile regime towards its people, pushing forward the agenda of the so-called security coordination protocols with the Jewish entity, even worse betraying them by using the PA security apparatus to deliver sought out persons and handing them over to the occupiers to languish in their prisons with no mercy. Families are left without their mothers, fathers, sons, and daughters. The PA’s process of normalization with the Jewish entity is accelerating at an alarming pace no longer mindful of criticism.

It is heartbreaking that families seek out various assistance and recourse to demand the release of their loved ones to no avail, all the while the PA insists on playing a complicit role with the occupier of the Blessed Land of Palestine. As the saying goes, the PA is tarred with the same brush as its occupier.