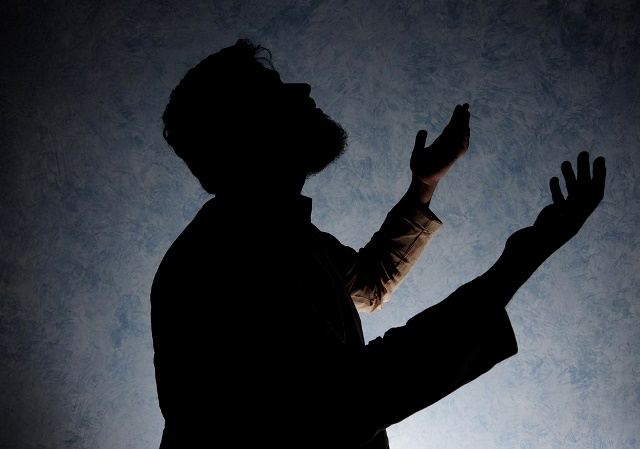 A Muslim will face many tests, difficulties, challenges, temptations and distractions in the path of carrying the Dawah to establish Allah (swt)’s System, the Khilafah (Caliphate), upon this earth. Only the one who truly yearns Jannah and the Pleasure of Allah (swt) more than anything in this world will be able to sacrifice whatever is required of his or her interests, desires, ambitions and life to fulfil the duty that the Creator (swt) has obligated upon him or her – to carry the mission of the prophets as His chosen witness to mankind, of establishing the Deen of Islam in authority in this world.

To sacrifice means to give up that which is dear to us – whether it be of our comforts, time, wealth, pleasures, desires, ambitions or interests – for the sake of that which our heart yearns more. Ramadan is a great reminder of this concept, for, as Believers, we leave that which is most fundamental for the human being – food and drink – for nothing other than securing the Pleasure of our Rabb (swt) and His rewards in Jannah, realising that this is superior than the enjoyment of the basic pleasures of this world.

However, to fulfil the role of being the ‘Just Ummah’, and the obligation of being Allah (swt)’s Witness over mankind requires struggle and sacrifice, and much more than an ordinary sacrifice of a few desires. Indeed, Allah (swt) says, قُلْ إِنَّ صَلاَتِي وَنُسُكِي وَمَحْيَايَ وَمَمَاتِي لِلّهِ رَبِّ الْعَالَمِينَ “Say: Surely my prayer and my sacrifice and my life and my death are (all) for Allah, the Lord of the worlds.” [Al-Anaam:162] Therefore the Muslim who truly understands the gravity of his or her duty of being the Witness over mankind and who also yearns the highest station in Jannah also appreciates that this will require for them to sacrifice that which may be dear to them, beyond that which may be easy, comfortable or convenient of our time, energy, sleep and wealth, for the Cause of Allah (swt). Allah (swt) says: لَن تَنَالُواْ الْبِرَّ حَتَّى تُنفِقُواْ مِمَّا تُحِبُّونَ وَمَا تُنفِقُواْ مِن شَيْءٍ فَإِنَّ اللّهَ بِهِ عَلِيمٌ “Never will you attain Al-Birr (righteousness) until you spend (in the way of Allah) of that which you love; and whatever of good you spend, Allah knows it well.” [Al-Imran: 92]

We see this level of ‘Al-Birr’ in the lives of the Sahaba and Sahabiyat (ra), such as with Musab ibn Umayr (ra) who sacrificed his lavish lifestyle as a youth, his high status in the society, and all the comforts he enjoyed, for the sake of Islam and carrying its message to the people. We saw it with Sumayyah bint Khayat (ra), the first martyr of Islam, who sacrificed her life for the sake of speaking the word of Haqq in the face of the enemies of Islam, and we saw it with Abu Bakr (ra) who sacrificed all his wealth for the Battle of Tabuk to further the dominance of Islam in the world. Indeed, it was due to the great sacrifices of these companions of the Prophet ﷺ and the early Believers that Islam spread across the globe, which led to us being blessed to call ourselves Muslims today.

However, such level of sacrifice is not easy. To achieve it requires one to truly yearn Jannah and the Pleasure of Allah (swt) over all other things in life. This cannot simply be something expressed by our tongues; rather, it needs to be manifest in our actions and life. It requires a realisation that our life cannot be an ordinary one that is simply consumed with the pursuit of the pleasures and comforts of this world or the ordinary routines of life, or one where our main focus, priority or worry is on increasing our wealth and possessions, decorating our homes, building a high status for us and our children in society, or enjoying the leisure and pleasures of this Dunya. The Prophet ﷺ, upon understanding the great mission he had been given by Allah (swt) to deliver His (swt)’s Deen to mankind, said to his wife Khadija (ra) – » «لا راحة بعد اليوم يا خديجة “The time for rest is over” – emphasizing the fact that for the one who caries this call, as every Muslim is obliged to, the time for revelling in one’s comforts, wealth, personal ambitions and temporary joys of this life is over, for there are much greater concerns which should consume our energies, thinking and worries – the status of Islam in this world and its position over humanity. This true yearning of Jannah and gaining the Pleasure of Allah (swt) over all things is exemplified in the example of the poetess Khansa, who stood with her four sons in the Battle of Al-Qadissiyah and motivated them to fight in the Cause of Allah. And when she heard that all four had been martyred in the battle, she said – “Alhamdulillah, All praise be to Allah, who honoured me with their death. I ask Him, glory be to Him, to join me together with them, in the dwellings of His Mercy.” Subhaanallah!

However, the dazzles of this world, and the fear of losing our comforts or interests can distract, hinder, or even keep us from fulfilling this important mission in life of striving to establish Allah (swt)’s System upon this earth. It can cloud that vision and yearning we have of securing a high position in Jannah. If this is the case, then we need to remember that everything in this world is nothing but a fragile ornament that Allah (swt) has placed before us, simply to test us in our belief as to whether we become distracted by it or not, as He says in the following verse: إِنَّا جَعَلْنَا مَا عَلَى الْأَرْضِ زِينَةً لَّهَا لِنَبْلُوَهُمْ أَيُّهُمْ أَحْسَنُ عَمَلًا “Lo! We have placed all that is in the earth as an ornament thereof that we may try them; which of them is best in conduct.” [Al-Kahf: 7] An ‘ornament’ serves no other purpose than simply making a room more attractive. Hence, this is the reminder that Allah (swt) gives us – that all the dazzles of this world are simply decorations and should not be given more weight in our eyes than they deserve, such that they keep us from the obedience of our Rabb (swt). He (swt) says: الْمَالُ وَالْبَنُونَ زِينَةُ الْحَيَاةِ الدُّنْيَا وَالْبَاقِيَاتُ الصَّالِحَاتُ خَيْرٌ عِندَ رَبِّكَ ثَوَابًا وَخَيْرٌ أَمَلًا “Wealth and children are [but] adornment of the worldly life. But the good deeds which endure are better in your Lord’s Sight for reward, and better in respect of hope.” [Al-Kahf: 46]

Furthermore, one of Shaytan’s greatest deceptions is magnifying the lures and pleasures of this life in our eyes such that they seem of more worth than they are in reality, so that we are distracted from the delights of Jannah and neglect the Commands of our Rabb (swt). He (swt) says: يَا أَيُّهَا النَّاسُ إِنَّ وَعْدَ اللَّهِ حَقٌّ فَلَا تَغُرَّنَّكُمُ الْحَيَاةُ الدُّنْيَا وَلَا يَغُرَّنَّكُم بِاللَّهِ الْغَرُورُ “O mankind! Verily the Promise of Allah is true. So let not this present life deceive you, and let not the chief deceiver (Shaytan) deceive you about Allah.” [Fatir: 5]

We should also reflect constantly on the fact that we are all well aware of the temporary and brief nature of all the comforts and pleasures of this Dunya which will come to an end. Indeed, this life is like a piece of ice left out in the sun – it will soon melt and vanish, while the Hereafter that Allah (swt) has set aside for us is for eternity. Allah (swt) says, اعْلَمُوا أَنَّمَا الْحَيَاةُ الدُّنْيَا لَعِبٌ وَلَهْوٌ وَزِينَةٌ وَتَفَاخُرٌ بَيْنَكُمْ وَتَكَاثُرٌ فِي الْأَمْوَالِ وَالْأَوْلَادِ كَمَثَلِ غَيْثٍ أَعْجَبَ الْكُفَّارَ نَبَاتُهُ ثُمَّ يَهِيجُ فَتَرَاهُ مُصْفَرًّا ثُمَّ يَكُونُ حُطَامًا وَفِي الْآخِرَةِ عَذَابٌ شَدِيدٌ وَمَغْفِرَةٌ مِّنَ اللَّهِ وَرِضْوَانٌ وَمَا الْحَيَاةُ الدُّنْيَا إِلَّا مَتَاعُ الْغُرُورِ “Know that the life of this world is only play and amusement, pomp and mutual boasting among you, and rivalry in respect of wealth and children. (It is) like vegetation after rain whose growth pleases the farmer but then it dries up and you see it turning yellow; then it becomes dried up and broken down; and in the hereafter is a severe chastisement and (also) forgiveness from Allah and (His) pleasure; and the life of this world is nothing but a deceiving enjoyment.” [Al-Hadid: 20]

And Allah (swt) says, وَفَرِحُواْ بِالْحَيَاةِ الدُّنْيَا وَمَا الْحَيَاةُ الدُّنْيَا فِي الآخِرَةِ إِلاَّ مَتَاعٌ “…and they rejoice in the life of the world, whereas the life of this world compared with the Hereafter is nothing but a brief passing enjoyment.” [Ar-Rad: 26] So the joys of this life are nothing but a fleeting, deceiving enjoyment. Do we therefore really want to sacrifice the eternal delights of Paradise due to the fear of losing a few temporary moments of comfort and pleasure in this life which distract us, hinder us, or keep us away from fulfilling our vital duty of working to establish the System of our Rabb (swt), the Khilafah, upon this earth?

Moreover, we need to truly appreciate how insignificant and minor the joys of the Dunya are compared to the lasting and unimaginable delights that awaits the righteous slave of Allah (swt) in Jannah, where they will be given everything that their heart could ever wish for, and more Insha Allah. Allah (swt) says: أَرَضِيتُم بِالْحَيَاةِ الدُّنْيَا مِنَ الآخِرَةِ فَمَا مَتَاعُ الْحَيَاةِ الدُّنْيَا فِي الآخِرَةِ إِلاَّ قَلِيلٌ “…Are you pleased with the life of this world rather than the Hereafter? But little is the enjoyment of the life of this world as compared with the Hereafter.” [Al-Taubah: 38] وَإِذَا رَأَيْتَ ثَمَّ رَأَيْتَ نَعِيمًا وَمُلْكًا كَبِيرًا “And when you look there [in Paradise] you will see a delight [that cannot be imagined], and a great dominion.” [Al Insan: 20]

The Sahaba (ra) asked the Prophet ﷺ what Paradise was built from, and he ﷺ replied, «لَبِنَةٌ مِنْ فِضَّةٍ وَلَبِنَةٌ مِنْ ذَهَبٍ وَمِلاَطُهَا الْمِسْكُ الأَذْفَرُ وَحَصْبَاؤُهَا اللُّؤْلُؤُ وَالْيَاقُوتُ وَتُرْبَتُهَا الزَّعْفَرَانُ مَنْ يَدْخُلْهَا يَنْعَمْ وَلاَ يَبْأَسْ وَيُخَلَّدْ وَلاَ يَمُوتْ لاَ تَبْلَى ثِيَابُهُمْ وَلاَ يَفْنَى شَبَابُهُمْ» “Bricks of gold and silver and mortar of fragrant musk; its pebbles are pearls and rubies, and its soil is saffron. Whoever enters it is blessed with joy and will never be miserable; he will remain there forever and never die; his clothes will never wear out, and his youth will never fade away.” The Prophet ﷺ also said, «وَاللَّهِ مَا الدُّنْيَا فِي الآخِرَةِ إِلاَّ مِثْلُ مَا يَجْعَلُ أَحَدُكُمْ إِصْبَعَهُ هَذِهِ – وَأَشَارَ يَحْيَى بِالسَّبَّابَةِ – فِي الْيَمِّ فَلْيَنْظُرْ بِمَ يَرْجِعُ» “The life of this world compared to the Hereafter is as if one of you were to put his finger in the ocean and take it out again then compare the water that remains on his finger to the water that remains in the ocean”. So the drops of water left on the finger are equivalent to the joys of this life, compared to the vastness of the ocean which represents the delights that await the righteous believer.

After considering all this, we should surely ask ourselves: what are we willing to sacrifice for the Cause of Allah (swt) to be deserving of such eternal delights? What have we done for the Cause of His Deen, Islam, to have earnt the right to such unimaginable rewards? And how can we afford to lose out on such a golden opportunity to gain a high position in Jannah promised to those who carry the dawa to establish Allah (swt)’s System upon this earth? There are many regrets we may have in life. But no regret can surely be greater than losing out on all this due to being attached and distracted on acquiring or preserving the minor, fleeting, deceiving joys of this world!