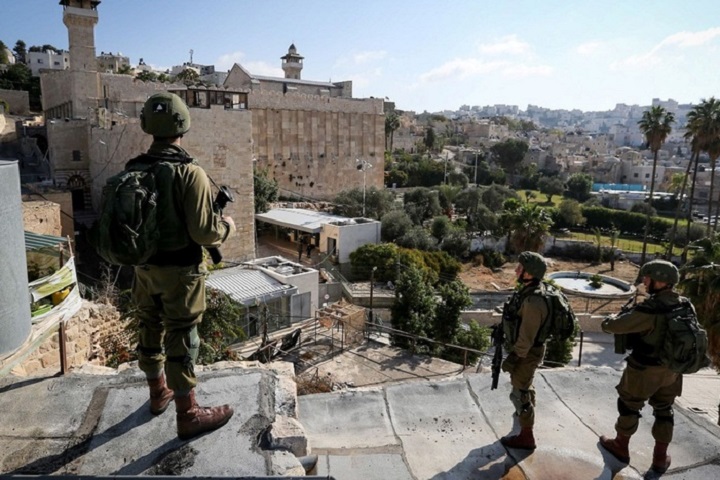 The City of Hebron (Al-Khalil) is subject to a fierce Judaization campaign similar to what is happening in Jerusalem (Al-Quds) and Al-Aqsa Mosque, as the Jewish entity does not spare any occasion, chance or incident but uses it to Judaize and impose procedures under pretexts of holidays and historical and Torah occasions. Inline with this, comes the intrusion of the President of the Jewish entity, within the movements of this spiteful entity that gravely target the heart of Al-Khalil and its Ibrahimi Mosque.

The Jewish entity sets its sights on the city of Al-Khalil to Judaize its Old City, its vicinity and its Ibrahimi Mosque, and it announces that when Herzog said “we have historical rights in Hebron”! who was preceded by Netanyahu, two years ago when said “Hebron will not be free from Jews … We are not strangers in Hebron. We will stay here forever”. Their policy is based on imposing further procedures; After planting the settlement pockets in the heart of the Old City and after dividing the Ibrahimi Mosque, they are now seeking to assemble those pockets by Judaization more of the Old City to become a large settlement bloc in the heart of Al-Khalil, and at the same time they seek to control the second part of the Ibrahimi Mosque to be exclusively for them.

The participation of members of the Hilltop Youth movement, which carries out the attacks against villagers specifically in the southern Hebron region with a view to expel them; their participation besides Herzog in the Mosque, as well as the participation of the leaders of the Kahanists, and specifically MP Itamar Ben Gvir and Baruch Marzel, both living in the settlement pockets in the city, in addition to the racist cheers echoed by the settlers during their exit with Herzog from the Ibrahimi Mosque against the Old Town residents of the city, all this clearly show the eagerness of these criminals to expel thestationed (al-Murabiteen) in their homes and residences and around the Ibrahimi Mosque, and that they are preparing for this and waiting for the appropriate opportunity.

These violations and this flagrant defiance of the Jewish entity comes in the light of complicity of the authority of security coordination, which found its way in suppressing the people of Palestine and prosecuting and detaining Dawah carriers and prosecuting people against their political views and narrowing them in their livelihood through taxes and unfairlevies, and nourishing the seeds of sedition between their ranks. And also in the light of normalization of Arab regimes, which have been signing joint defense agreements with this usurping entity, to confirm that all of the people of Palestine and the entire Ummah are in one camp, and the Palestinian Authority, the traitorous rulers, the Jewish entity, America and the colonial countries are in another camp.

The City of Al-Khalil – the city of Ibrahim (peace be upon him) – and its Ibrahimi Mosque are the pillars of the Blessed Land of Palestine. The right of the people of Palestine and Muslims in them is not historical or heritage determined by UNESCO or other organizations affiliated with the United Nations – which played a role in consolidating the Jewish entity and legitimize it, for them to be turned to, but our right on them is a right decided by the Holy Quran which has obliged Muslims to protect and defend them. Therefore, the turn should be towards the Islamic Ummah to uproot this cancer from its roots and rid Hebron, Jerusalem and the whole of Palestine from its desecration and tampering.

The people of Hebron must be cautious of all that which target their unity, their stationing and cohesion in their city, and be one hand and overcome all their differences which are incited by suspects, and to realize the extent of the danger and the gravity of the issue, which target them and target their city and aim to migrate and expel them from it.