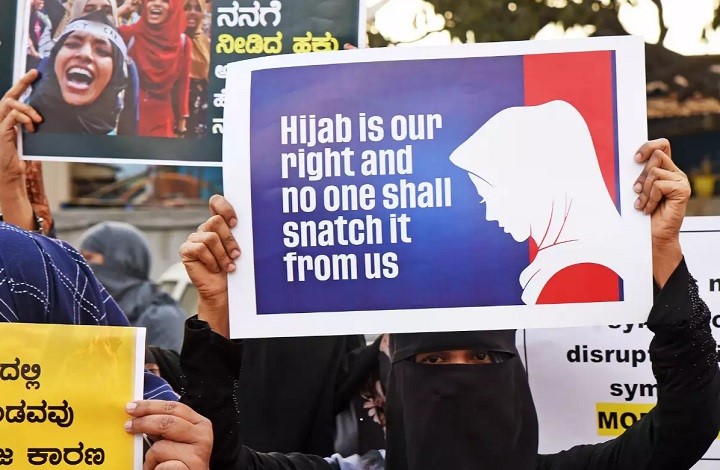 Amid protests in Karnataka state of India, by Muslim girls to be allowed to attend classes wearing a hijab, a group of students marched to their college wearing saffron scarves. Videos from Kundapur in the Udupi district of Karnataka and elsewhere show boys and girls wearing the saffron scarves and spreading violence against the Muslim girls in hijab. This denotes their culture and the venom in their thoughts which also shows the norms of their belief system.

The way hijab wearing Muskan responded to the heckling by the violent mob with saffron scarves chanting “jai shri ram” is stupendous. Her courageous response with “Allahu Akbar” was full of valour which shows her confidence and close association to the Islamic creed and its belief system.

In India, Muslim women are under direct attack whether it is outrageous online ‘Sulli Deals’, ‘Bulli Bai’ or the ‘Hijab’ issue which is now on the horizon. Communal racism and other similar forms of fanatical and narrow-minded views are abominable, odious, and non-Islamic concepts that certainly deserve to be combated.

As for the politicians, they refer to the Muslims, living in India, as the imposed outcome of invaders coming to the land centuries back. This is simply a cooked up thought. Projecting the faith of the Indian Muslims as a result of subjugation of those who established Islam and ruled for more than thousand years is a myth. This propaganda is absolutely distortion of realities; it is a fraud and the falsification of records. In fact, this contradicts the psyche of human intellect. It also contradicts the way human mind analyses good from bad and right from wrong which subsequently creates concepts and a belief system about life and purpose of its creation. Human belief system needs an answer to its relationship to the Creator of the human race and universe. It also answers to the questions regarding what was before this life and what would follow after this life. History is the proof that all efforts to subjugate and force Muslims to change their belief system failed. Rather, any discrimination and oppression of Muslims made them stronger in their Islamic belief.

On one hand, the government incites intolerance and cultural struggle against Muslims in the name of hijab, talaq, eating norms, religious practices and belief system. On the other hand, it wants to acquit itself and make itself the avant-garde of anti-racism which lacks the slightest degree of credibility and sincerity.

Meanwhile, the ground realities and numerous evidences regarding hate crimes repeatedly show that the most vulnerable “religious group” are the Muslims.

The recent series of incidents across the globe, in general, and within India, in particular, is a result of a reality of “clash of civilization” which is otherwise termed as “the war of ideas”. A stronger thought of Islam which cannot be challenged intellectually is being attacked by all possible physical means. A large part of the Indian population’s view of Muslims has been distorted and manipulated, which is the result of seventy-five years of intensive propaganda and demonization of Muslims in this part of the world.

These issues pertaining to Muslims, the followers of Islamic faith, is nothing more than a political smokescreen and a mockery of anyone who really worries about the development of society. Such ideological practices create a political culture which would extend its poisonous tentacles beyond the reams of the present target, the Muslims.

The Karnataka hijab row has triggered a larger debate in India about Islamic regulations. Such debates are neither new nor limited to India. The campaign against hijab is at least a century old. The biggest proponent of discarding such Islamic dress codes was Kemal Pasha of Turkey who, in fact, is responsible for ending the “Rule of Shariah” under the Khilafah (Caliphate) State.

However, Recep Tayyip Erdogan, President of Turkey, lifted the ban on hijab in Turkey after sensing the emotions, and love for the Islamic belief system of the Muslims. The hatred against Islam and intellectual challenge posed by the Islamic creed is evident globally. European countries like France, Denmark, Switzerland, Britain, Germany, Austria, Bulgaria, Belgium, Russia and Netherlands have banned or restricted Hijab. This simply shows that democracies of all forms – oldest, largest and greatest are incapable to deal with sound differing views of life of their citizens. Rather, they move to hide behind politics of hatred in the name of protecting citizens.

But before taking a course of action under the present row over hijab, we are bound to decide on the source of solution. Let us ask our belief system regarding the source of our action and solution to any of the problems and incidents in life. Yes, Allah only can be our source of guidance and not the human mind. When human mind makes a system and laws, it is bound by weakness, contradictions and differences and the result would be a failure due to its limitations. Several Muslims naively find a refuge in the man-made laws and the rights given by those laws. One should, however, ask oneself a very basic and crucial question:

What, or rather, who is the cause of the widespread xenophobia and hatred against Muslims in society which leads to systematic discrimination and more hate crimes?

It is no secret in this regard that the Muslim community has been a target of hate specifically for the past two decades by the politicians and by the media at all levels. During the last hundred years, after the demise of the Khilafah State, countless specific laws and vilification against Muslims with a hard line against them have become a trend to polarize the non-Muslims. Muslims have firmly stood strong and faced the negative political onslaught under different ruling parliamentary majorities and governments.

It is not just a mismanagement of the administration under any government to be blamed for creating an atmosphere of hatred against Muslims; rather, it is a systematic discrimination that seeks to stifle the emergence of the sharia, the limits of Allah on earth. This is a clear proof of the ideological failure of the political thought of such failed systems. Further, subsequent plans of political actions of those running the show would establish the reality of its intellectual inferiority incoherent with the intellect of a sane thought process.

It seems that the rulers on the Muslim lands will never protect the Muslims in any way. They are weak to stand for Islam the way our sister Muskan stood. All our sisters across the globe who are being a targeted will find a “Mutasim billah” in the Amir, the Imam of the Momineen. We must see the Muslim masses as the real heroes of Islam rather than getting carried away by the hollow statements and hypocritical statements of the Rulers of the Muslim lands. As mentioned in the Hadeeth of our Prophet (saw):

“Verily the Imam is but a shield that is protected by and fought from behind.” (Saheeh, Bukhari)

This Ummah awaits such Imam, the future Khaleefah. And unfortunately they are getting betrayed by the rulers in the Muslim lands. We lost our shield, and without reinstating the Khilafah, we will witness more attacks and oppression in the years to come.

This Ummah is in dire need for Allah’s (swt) protection under the shade of His Sharia to be implemented by an Imam. That would only give it back the peace, dignity, honour, prestige and the ultimate success in the Hereafter.