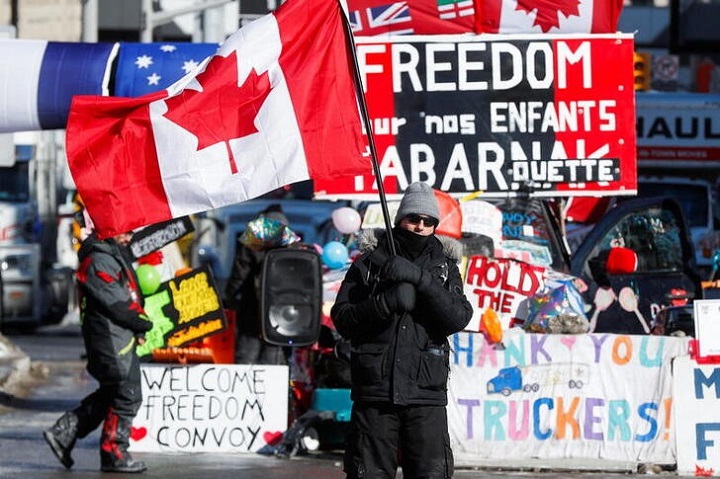 “Police in Canada, France Deploy Snipers, Tear Gas Against ‘Freedom Convoys’” according to headline news from Newsweek on the 12th of February after 3 weeks of protests against draconian vaccine mandates closed parts of the US-Canadian border and protesters converged on Paris to shut down the French capitol. Protesters used trucks and cars to physically block roads calling themselves “freedom convoys” in protest against vaccine mandates forcing people to be vaccinated against Covid-19.

The Canadian freedom convoys were blocking a vital border crossing for goods and a state of emergency was declared, followed by government intimidation and harsh warnings to disperse. The remaining demonstrators were arrested without much resistance. In France the police used tear gas to end their “freedom convoy.” Canadian protesters had earlier gathered outside the office of Prime Minister Trudeau, while the prime minister and his family were taken to a secret location away from demonstrators with one protester saying: “I want it all to stop – these measures are unjustified… The vaccination requirements are taking us toward a new society we never voted for”. As well as Canada and France, similar disruptive protests have taken hold in New Zealand and many cities and states in the US, but is all this necessary?

Covid-19 vaccine mandates force citizens to get vaccinated or lose their jobs and or their right to travel freely within and between countries. So far, 10.4 billion doses have been administered globally, but with considerable inequity, such that only 10.6% of people in low-income countries have received at least one dose. When vaccines were first introduced they were shown to be highly effective at preventing Covid-19, but much has changed since the end of 2020 when vaccines started to be distributed. The virus has changed dramatically, and so has the epidemiological situation and the degree of worldwide immunity since governments and health organizations around the world thought of mass vaccination as a means to control the spread of SARS CoV-2 and replace other more disruptive measures that impacted the global economy so heavily.

The first warning that vaccines might not be the answer to the pandemic was the alpha variant with its mutations in the all-important spike protein, which reduced the effectiveness of vaccines, and along with this came the realization that immunity declines rapidly after 6 to 8 months of vaccination or natural infection. Then came another variant, delta, and with it a more severe drop in protection from disease, and yet protection from symptomatic disease could still be considered good; but then, just as waves of delta infections were peaking in most countries, a vastly more serious threat appeared. Omicron with a massive 30 mutations in its spike protein slashed vaccine effectiveness, along with the effectiveness of natural infection with previous variants, such that despite high average vaccination rates in high-income countries of about 170% omicron gained dominance worldwide in a matter of weeks and drove waves of infection with 3 to 4 times higher daily recorded infections across a swathe of countries.

As the virus evolved more and more resistance to vaccine-derived antibodies, its infectivity kept rising and its incubation period kept getting shorter. The incubation period is very important because a short incubation period (3 days on average for omicron) means that an infected person is shedding a large amount of freshly replicating virus before they have knowledge of their infection. More importantly, this incredibly short incubation period means that the infected person’s immune system has little time to bring the infection under control before secondary transmission to another person. Viruses such as small pox and polio have been successfully controlled by vaccination, but they have much longer incubation periods. Vaccination may still have some effect on reducing secondary transmission, but the effect is small and the window of effectiveness is narrow in time, even with boosting by a third dose. Vaccination is still a valuable tool to reduce disease severity, but preventing the spread of SARS CoV-2 by vaccination is like bailing out a sinking ship with a small bucket.

Nevertheless, governments during the omicron era still insist on punishing those who don’t wish to be vaccinated. Transplant patients have been refused treatment, workers have had their jobs taken away and the free movement of people has been denied, which also makes little sense from an epidemiological perspective. Omicron infection rates have peaked or are falling in most high-income countries, and considering that a full vaccination is only counted after administration of a second dose, along with two weeks for it to have effect, it ought to be clear to anyone that it is too late for those being vaccinated today to be protected from the current wave of infections. The Western world will have entered a period of Covid-19 calm before those forced to get vaccinated will have generated any meaningful immunity. A great many will experience ‘breakthrough’ infections, thus increasing the sense among those fearful and suspicious people that there is a conspiracy.

Linked to the bad timing of vaccine mandates is the remarkable statistic that 82 percent of Canadians, for example, aged five or older have already been vaccinated against Covid-19, and 90 percent of adults have been vaccinated. Coupled with the 1.34 million Canadians who have tested positive for Covid-19 in the last 2 months and the greater number that have been infected and haven’t been tested there clearly is very little increase in herd-immunity achievable by chasing and persecuting a few thousand people who don’t want to be vaccinated.

Western governments faced a truly chaotic situation with the sudden appearance of Covid-19 just over 2 years ago, which required fast action. They were not fast enough: they waited for the World Health Organization to officially announce a pandemic and they waited for it to enter their borders and then they closed the borders too late. Since then, tools to fight the pandemic have been developed, and critical shortfalls in testing and protective clothing production have been overcome, but the pandemic nevertheless presents a complex challenge, and yet governments have addressed it as an orderly type of problem that though complicated can be addressed by a set of well-established best practices such as vaccinating people. However, this has underestimated the complexity of the situation and led to the rigidity that suits a static problem but fails miserably in the face of a crisis. Chaos, complexity and orderliness need to be addressed in fundamentally different types of ways, and failure to realize this leads to crises turning into unmitigated disasters, and manageable situations turning into unnecessary and ugly challenges. Were European governments to be more agile in their approach to, and understanding of, complexity, they would not keep closing the door on Covid-19 after the danger has passed the threshold, and they would be addressing the problems of today and tomorrow with new solutions, rather than the solutions of yesterday. Maybe, with more agile political leadership, Europe would also not now be sandwiched between Russian belligerency at Ukraine’s border and reliance upon post Trumpian US good-will to back them up through NATO against imminent threats of invasion.